Colson Whitehead’s The Nickel Boys shines a light on an insidious evil. 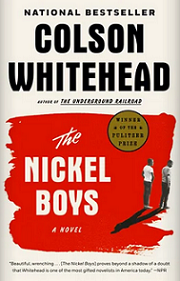 Colson Whitehead is to American literature what the Rolls-Royce is to automobiles: revered and unrivaled. Having published eight novels, two books of nonfiction, and numerous essays and short stories, the 52-year-old writer has won a MacArthur “genius” grant, a Guggenheim Fellowship, the Booker Prize, the National Book Award, two Pulitzers, and the Carnegie Medal for Excellence, as well as a Whiting Writers Award, the John Dos Passos Prize for Literature, and a fellowship at the Cullman Center for Scholars and Writers. In addition, he made the cover of TIME in 2019 as “America’s Storyteller.”

The only accolade remaining seems to be a royal summons to Sweden for the Nobel.

In 2016, Whitehead’s eighth novel, The Underground Railroad, an allegorical tour de force about enslaved people trying to escape to freedom, thundered him to commercial success and sold over 1 million copies. He’d already started writing his next novel when he spotted a story in the Tampa Bay Times about the Arthur G. Dozier School for Boys in the Florida Panhandle. The segregated reform school, which opened in 1900, had finally closed in 2011.

Whitehead had never heard of the facility and was stunned to read that forensic archaeologists from the University of South Florida had discovered the unmarked graves of more than 50 African American boys on the property.

He realized then that if there was one adolescent abattoir like Dozier, “There were hundreds of others scattered across the land like pain factories,” he told the New York Times. “The survivors are never heard from and the guilty are never punished...They live to a ripe old age while their victims are damaged for life.”

The injustice rankled the author, and the subject became more urgent to Whitehead after the 2016 presidential election. Setting aside his novel-in-progress, he began investigating like the journalist he’d been at the Village Voice following his graduation from Harvard. He absorbed all the blood-stained facts surrounding the Dozier atrocity; he read reports, records, and forensic studies of the gravesites, plus accounts of solitary confinement during which Black and white boys were shackled by leg irons soldered to the floor and forced to live in their own excrement.

Many of these boys were also whipped by a three-foot-long strap called Black Beauty. Those who did not survive were dumped into dirt holes; those who did were forever haunted. They became men “with wives and ex-wives and children they did and didn’t talk to…dead in prison or decomposing in rooms they rented by the week.”

After mastering the grisly facts, the spectacular novelist within Whitehead took flight with The Nickel Boys. In this spare book — it’s just 224 pages — he bestows humanity on the unnamed victims who’d once been sodomized and beaten witless. He humanizes them in the character Elwood Curtis, an orphan who lives with his grandmother, Harriet. She toils as a cleaning lady and sleeps with a “sugarcane machete under her pillow for intruders.”

One Christmas, Harriet gives Elwood his greatest treasure: the 1962 LP “Martin Luther King at Zion Hill,” the only record he’s allowed to play. Elwood listens to the album every day and long into the night. He embraces Dr. King’s words as his guidepost for living. He believes that the long arc of the moral universe is bending towards him and will soon change his life.

That, it does — tragically.

Through no fault of his own, Elwood ends up in the hellscape of Nickel Academy, where he meets his polar opposite, a street-smart tough named Turner who thinks Elwood is hopelessly naïve. The story turns on their relationship, their joint attempt at escape, and the final honor one pays to the other.

Nickel is not Father Flanagan’s Boys Town, where “He ain’t heavy, Father. He’s my brother” was the motto. Instead, among Nickel survivors, there’s a bond of grievous horror and lives never lived:

“[They] could have been many things had they not been ruined by that place…not all of them were geniuses…but they had been denied even the simple pleasure of being ordinary. Hobbled and handicapped before the race even began, never figuring out how to be normal.”

For them, the long arc of the moral universe was forever out of reach.

The Nickel Boys is a novel that elevates Colson Whitehead to the pantheon alongside Langston Hughes, James Baldwin, Toni Morrison, and Zora Neale Hurston, all of whom, too, bore witness to America’s pernicious legacy of racism and white supremacy.

Kitty Kelley is the author of seven number-one New York Times bestseller biographies, including Nancy Reagan, Jackie Oh!, and The Family: The Real Story Behind the Bush Dynasty. She is on the board of the Independent.