How the Anthropocene Age is affecting the ecology around us. 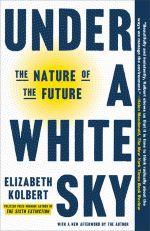 I read Elizabeth Kolbert’s Under a White Sky: The Nature of the Future during the deluge brought on by Hurricane Ian, a Category 4 storm that devastated Florida and reminded me of two points: first, how powerful nature can be without any help from humans at all, and second, how much worse we are making things.

For some reason, I expected the book to be a bloodless, cold-hearted look at the grim future of our planet. Instead, I was treated to a humorous assessment of the many ways humans are changing our environment and a commonsense look at how we are countering those alterations — sometimes with a new layer of unintended consequences added on.

I learned, for example, that there is a species of fish, Devils Hole pupfish, that exists naturally in only one cavern in Nevada, “a geological oddity — a portal to a vast, maze-like aquifer that runs far beneath the ground and holds water left over from the Pleistocene.”

This 60-foot-by-8-foot pool constitutes its entire habitat, yet humans have still found a way to muck about in it: In 2016, three apparently drunk men managed to clamber over the surrounding chain-link fence, and one of them went skinny-dipping in the pupfishes’ cavern, disturbing their tiny living area (and leaving behind some highly questionable underwear).

Researchers are so concerned about the fate of rarities like the pupfish that they’ve built what Kolbert refers to as “a kind of fishy Westworld” — a partial re-creation of Devils Hole that allows scientists to observe and monitor the fish in a controlled environment. Planned during a year when the census of pupfish hit a record low of 38 (total!), the simulacrum enables them to survive for longer than they would in Devils Hole.

(When Kolbert attended one of the pupfish counts, which occur four times per year, she calculated that the 195 fish now present weigh slightly less than a single McDonald’s Filet-O-Fish sandwich.)

Yet importing an entire ecosystem has proved problematic. After also transferring over a beetle native to the pupfishes’ natural environment, researchers realized it “had made the transition to the concrete version all too cheerfully. It was reproducing far faster than in the wild, and somewhere along the way it had developed a taste for pupfish young” — the very population the scientists were trying so hard to preserve. Staff now spend hours each day sifting and tweezering these beetles out, demonstrating the difficulties inherent in artificial ecosystems.

I loved the way Kolbert discusses the future of the world; she approaches it from a standpoint of curiosity and learning rather than judgment and panic. This is not to say we can afford to treat all environmental problems cavalierly, yet it does seem healthier to regard our planet as being in a state of flux (to which we are contributing), and not as an already-ruined world whose resources we should simply continue to bleed.

It’s impossible to know the precise toll we exact on the environment. I don’t know, for instance, whether it was right to reverse the flow of the Chicago River, as 19th-century builders did, or to create genetic-engineering kits, like a company called Odin does in California. And I can’t say whether genetically engineering algae in controlled environments is the best way to save the Great Barrier Reef (a method some scientists are enthusiastically exploring). But Under a White Sky helped remind me of the bigger picture: For better or worse, humans are the apex species in the world, and it’s our obligation to preserve it.