A novel set in the 1790s has surprising resonance today. 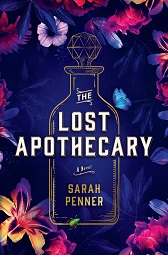 It’s been a tough few centuries for women, as attested to by Sarah Penner’s The Lost Apothecary. The book follows the life of an 18th-century druggist who dispenses not only healing remedies but also deadly poisons to the women who visit her. The toxins are used as retribution upon philandering men or as a means of escape from heavy-handed masters.

According to a note by the author, “Throughout England in the eighteenth and nineteenth centuries, the largest population of accused poisoners consisted of mothers, wives, and female servants, between the ages of twenty and twenty-nine.”

Given the rampant everyday misogyny perpetrated against women, it’s difficult to tell how many of them were actual poisoners and how many might simply have borne the brunt of unfair accusations. Nevertheless, one thing seems clear: For hundreds, if not thousands, of years, women have been taking their fates into their own hands via a variety of methods.

Unfortunately, the trend of oppressing women continues to this day: In September 2021, Texas passed Senate Bill 8, banning all abortions after the sixth week of pregnancy and jeopardizing the physical health and mental wellbeing of millions of women. Weighing in on a legal challenge to the bill, Supreme Court Justice Amy Coney Barrett recently opined that the “safe haven” laws in all 50 states allowing mothers to relinquish parental rights should “take care of that problem” (abortion).

That Barrett, a mother of seven, doesn’t seem to realize the myriad costs attendant on an unwanted pregnancy that cannot legally be terminated suggests we have not come as far as we’d hoped on the topic of women’s rights.

Of course, as enraging as it is to continue to witness discrimination against women, I’m not advocating poison as a solution (though sending hot-pink glitter bombs to prominent misogynists did, briefly, present itself to me as an alternative). What I am suggesting is that now, as so often before, women collaborate and support one another in times of stress and danger.

As illustrated by Justice Barrett, this course is not always possible. Yet there are many ways we can encourage the women in our lives without involving politics — by bringing a new mother a casserole or talking up a female colleague at work, for example. (This is a good place to note that trans women are women, and trans rights are human rights.) We don’t have to be controversial to make a positive impression on others’ lives.

Another way to show solidarity is to donate to a charity focused on empowering women. The National Women’s Law Center, with has a 100 out of 100 “accountability and transparency” score from CharityNavigator and “fights for gender justice — in the courts, in public policy, and in our society — working across the issues that are central to the lives of women and girls” is a good place to start. And on a more global level, Women for Women International focuses on aiding women torn apart by war or other trauma (current conflict-response sites include Myanmar, Syria, and Ethiopia).

Whatever the ways you choose to support women and be a feminist, thank you. We truly are stronger together.