“Technology has run ahead of the law or the ability of anyone — citizens, courts, press, or Congress — to have meaningful oversight of what is happening."

“I have some stuff you might be interested in,” the now notorious Edward Snowden wrote in December 2012 to Glenn Greenwald, the freelance internet blogger and columnist for the Guardian, and to Laura Poitras, the documentary maker who had worked in her medium on security affairs.

He surely did, as the world now knows — the release of 1.7 million classified documents which have sparked an international cause célèbre that still rages on.

At one extreme are those who argue that Snowden is a terrorist who should be extradited and indicted for espionage. At the other are those who believe he is a cultural hero whose selfless actions of civil disobedience have brought about necessary changes in our security practices.

Scholars and experts have debated the proper role of security agencies and their private contractors, of the courts and Congress and the press in exposing executive action to public scrutiny. The debate continues, and surely more books will appear, taking sides in the important issues raised by Snowden’s actions (Greenwald has a book coming out soon which I will review in CapitaLetters at that time).

The drama moves from Hawaii to Hong Kong to Berlin, London, New York, and finally Moscow. Snowden’s disclosures demonstrate that, for years, the NSA in the U.S. and its U.K. counterpart, GCHQ, had been vacuuming vast troves of meta data regarding private citizens and foreign states with the cooperation of 100 private companies. 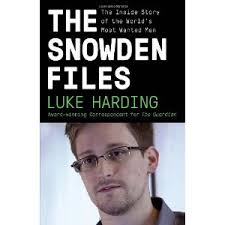 It was “the scoop to end all scoops,” as Harding writes, “a global phenomenon,” a “lightning rod for all sorts of conflicting views about the state, the boundaries of privacy and security, and even the modern condition.” And Snowden had become “the most hunted man on the planet” as a result of his disclosures.

The Guardian partnered with the New York Times (the Times got the thumb drive that the U.K. government sought to destroy, and the Guardian got the First Amendment, which provides journalists with far greater protections than British law does). Soon, Der Spiegel became involved (“Der Shitstorm” was caused when it became clear that everyone up to Angela Merkel was exposed to surveillance), and then Le Monde and the Washington Post.

The 29-year-old Snowden had become so distressed about the level of post-9/11 surveillance practices that he left his high-level, high-paying work, his paradisiacal life, and his personal security, taking four laptops with encrypted, top-secret files, and became a literal man without a country, all to show the world that the internet had been hijacked by spies. The U.S. had out-Stasied the Stasi.

Harding describes the “rolling wave of public indignation” involving political agreement across traditional political divisions that has resulted. No one across the world is immune from this invasion of their private life; there is no freedom from scrutiny in egress or ingress in this country or others.

Harding’s book is a fascinating behind-the-scenes spy story told in real time, literary in its touches and awesome in its details. So many people are involved in the Orwellian world Snowden has revealed that it was inevitable someone would breach the secrecy.

Snowden did. He picked the scab and exposed the policy wound to the light of public glare. He blew the whistle, and like so many others before him, he will suffer, even as the public, hopefully, seeks redress for the invasions its government inflicted on it.

This story is not over, but Harding’s tale of the opening act is a great read.

A trio of thrillers to enjoy as August becomes autumn

Today's commentary is the second of two reviews by Ronald Goldfarb on the vast number of Kennedy assassination books prompted by the 50th anniversary of that terrible event.