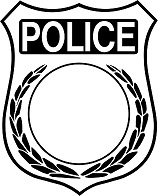 I recently completed the citizens’ police academy in my town. It was amazing. Even if you aren’t interested in writing crime fiction, I highly recommend the experience. Not only will you learn the basics of what your police department actually does, but you’ll get a much better sense of how they interact in your community.

For me, the human element is the most important, even though most of my questions pried into particular crimes, laws, or police equipment. But watching how the officers engaged the citizen “cadets” and each other was very telling (and in the case of my town, very reassuring).

During the first meeting, I mentioned that I write crime fiction. There was a moment of silence. Then a pleased laugh. The officers were actually tickled by this revelation. Which helped, since I planned to pick their brains on every conceivable topic related to crime.

Some of the topics we covered: the history of policing in Maryland; legal dilemmas police face; use of excessive force; crime scene investigation (including a really cool fake one to practice on); and even how to deal with someone high on drugs like PCP.

We were able to see an evidence storage room and holding cells in the police station. We tried on S.W.A.T. vests and carried the shields they use (which are freakin’ heavy). We wore goggles that showed us what it was like to have a blood-alcohol level well over the limit and then were encouraged to drive remote-controlled cars around an obstacle course. Hilarity ensued.

Oh, and we also got to hang out on a tank. My son was SO jealous.

The best part? Not only have I learned a lot about what goes on in a police station, but I’ve now met a bunch of officers whom I can ask all my offbeat writer questions. And I have a lot of them. In fact, during our graduation ceremony, it may have been mentioned that I was the one with the binder full of notes.

Did I mention I asked lots and lots of questions?

Mystery writers are an unusual — and some might say creepy — bunch because nothing jazzes us like talking about crime. Particularly how to get away with it. We want to know how to pick locks, what it feels like to be stuffed in a car trunk, and whether someone really can hang themselves from a shoelace.

Can you kill someone with an icicle? What would be the most effective way to get out of a jail cell, and where are the observation cameras placed in prisons?

I suspect that more than a few of us are now on some secret government list somewhere. I picture a harried NSA specialist assigned to us mystery writers calling out to her boss, “Meg Opperman’s searching online for how to grind castor seeds to make ricin. Again.”

But seriously, it’s important to get it right. The Internet is my friend, but there are details I haven’t been able to find out online no matter how long I’ve spent looking. But if I can pick up the phone or send an email off to someone I know will have the answer, it can save me a lot of time and frustration.

Still, it must be strange to be a police officer and get hit up about, say, how to slip out of handcuffs or what are the ways to mess up a crime scene. Somehow, though, I didn’t get a side-eye when I asked those questions. I was a little disappointed.

Where I did tread a little lighter was in asking about the internal workings of a police department. What happens if someone screws up? Can an officer be demoted and then transferred to another section of the department, or would they likely be fired? These are things that make the fictional worlds I create believable.

Still, I worried about asking these questions because I didn’t want the officers to think I had some ulterior motive. Fortunately, my town’s police department prides itself on transparency, so what could have been an awkward conversation wasn’t at all. In fact, suggestions were given that strengthened a particular piece I was working on.

Now, if they’d just lend me some handcuffs to practice lock picking…

5 Gifts for the Writer in Your Life

‘Tis the season, after all