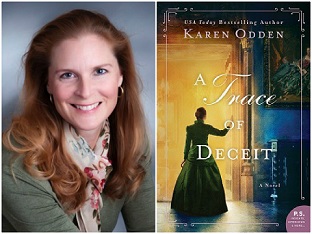 In A Trace of Deceit, author Karen Odden paints a vivid picture of 19th-century England, the world of art auction houses, and a woman refusing the constraints of society.

Annabel Rowe is one of the few female painters studying at the Slade School. Her talent is evident but not as brilliant as her brother Edwin’s skill with a paintbrush. But Edwin had wasted his gift — their father had referred to his character as “weak and unfixed.” As if living out his father’s opinions, Edwin succumbed to the lure of gambling and opium.

When authorities caught Edwin painting forgeries of famous works, he served a year in jail. After his release, Annabel wasn’t sure she could ever trust him again. Although it now appears he’s reformed his life, when he misses their bi-weekly visit, Annabel fears he's relapsed. But she soon discovers why he hadn’t contacted her — someone murdered him.

Annabel convinces the homicide detective from Scotland Yard, Matthew Hallam, to let her assist with the investigation. Her knowledge of art and Edwin’s life can aid in pursuing the killer. Together, they follow clues into the world of priceless paintings, art auctions, and abuse at a private boarding school. And now Annabel is a target. Will they find Edwin’s murderer before he kills again?

Odden’s literary brushstrokes vividly portray the misogyny and gender bias experienced by women in Victorian society, especially a woman battling to exercise her artistic talent. Odden takes readers down the cobbled streets of London — walking through the English fog, tracking a killer, and peering into the cutthroat world of famous art auctions.

Matthew, the detective, is the brother of the protagonist in Odden’s previous Victorian mystery, A Dangerous Duet, in which Nell Hallam struggles to become a concert pianist in the face of prejudice toward women. Both books compel us to consider the importance of family and the fragile relationships that bind us together and tear us apart. How well do we know each other, and how might our experiences color the way we feel about our relationships?

Annabel realizes the truth of Matthew’s words, “I think all our memories have a trace of deceit in them. Our recollection is a flawed, imperfect thing, unstable and prone to suggestion.”

A Trace of Deceit also addresses the discrepancies of fact versus fiction, evidence of both right- and wrong-doing, and how the weight of public opinion can damage reputations and sway investigations.

Here, Odden gives us insight into how Victorian society viewed the role of women, and into the society itself.

How is 19th-century gender bias a key issue in A Trace of Deceit?

Until Felix Slade created London’s Slade School of Art in 1871, English (and many European) women found it nearly impossible to be admitted to rigorous art classes, particularly those in anatomical drawing.

This issue shaped the life of one of the earliest Slade students, Kate Greenaway. She attended the Finsbury School at night because women could not attend the day classes, which were reserved for men. Frustrated by the limited offerings, she moved to the Royal Female School for Art, but even there, she had no opportunity to study anatomical drawing from live models until she entered the Slade in the early 1870s.

Gender inequality in art education is only emblematic of what was happening in England. For example, although women’s suffrage was being discussed in the 1870s, not until 1928 could all women over the age of 21 vote. Also, until the Married Women’s Property Act was passed in 1870, the legal practice of coverture dictated that a woman was the legal property of her husband, and all of her possessions became his property upon marriage.

In A Trace of Deceit, I wanted to show how gender inequality in every sphere — social, economic, educational, and political — affected women artists both materially and psychologically. Annabel’s fear that she won’t be able to pay her school fees, her difficulty with disparaging remarks made by male students, her tendency to be an observer rather than a confident participant, and her anxiety about taking her own talent seriously all have their foundation in the pervasive inequality she has experienced since childhood.

How do you write marginal voices into your novels?

I adore secondary characters, and this is where marginal voices can sing and also illuminate various aspects of culture. The working-class maid Mary provides information to Annabel for the investigation. She is not in a position of power but a modestly paid employee. If they fire her, she would not get a letter of reference and wouldn’t easily find another position with a good family. But belonging to a household puts Mary in the position of knowing intimate details about her masters. This “servant’s knowledge” is power, and crucial to Annabel discovering the truth about her brother’s death. Mary tells Annabel what she knows because she has a fundamental desire to convey the truth, a longing to connect with others, and a need to feel that what she knows matters to someone else.

How did you come to include authentic stories and the history of art auction houses, the fire at the Pantechnicon in London, and the Slade School of Art in A Trace of Deceit?

I worked at Christie’s auction house in New York in the 1990s when they sold Leonardo da Vinci’s notebook, the Codex Hammer (including the famous image of the Vitruvian Man in the circle), to Bill Gates in a fervent bidding war, for $28 million. I still shiver remembering the moment the hammer fell, gasps filling the auction room. It was the first time I experienced the suspense and thrill that could swirl around a piece of art.

I knew about the Slade School from a romance I’d loved as a teen, Friends and Lovers by Helen MacInnes. Discovering the Pantechnicon (the private warehouse where wealthy families housed their valuables) was sheer luck — I read an article about arson and unsolved crimes involving fire that mentioned it.

What is behind the name of the novel?

I wanted to suggest that this is a book about how our memories change over time. They all have a shade of truth, but they also have a bit of deceit in them. Our memories rarely match up perfectly with anyone else’s because we all notice different things. I was intrigued by the difference between a painting, which you can revisit to find the same image, and memories, which you can’t.

How have you used the pain of a person’s personal history to shape your story?

Our early experiences — both joyful and painful — can shape who we become. Pain can etch itself into our subconscious, creating beliefs and assumptions about the world and how we should (or shouldn’t) love and trust other people. In each of my three novels, the heroine has to unlearn a belief she has gathered from a painful aspect of her childhood to move forward in her present, to solve the mystery, and to become her authentic self.

How are the societal challenges faced by the characters in A Trace of Deceit similar to those we face today?

One of the biggest challenges I see today is the difficulty in evaluating information. What constitutes proof, truth, and legitimate facts, and who or what guarantees or grounds them? These are profound challenges in every age. But in Victorian England, “proof” of a crime was problematic because so many of the technologies for gathering evidence were new, and the information they provided was poorly evaluated and managed. Fingerprinting wouldn’t be established as a reliable means of ascertaining identity until the 1890s. Books of criminals' photographs were incomplete and unwieldy to use. We now have a surplus of information — fingerprints, identity cards, and DNA testing — but we still face the challenge of this information being manipulated, creating a manufactured "proof."

How is Annabel Rowe an inspiration for women today?

First, she has the courage to pursue a career with no guarantees of success — she’s willing to be openhearted and humble and explore the margins of her talent. Second, as she attempts to come to terms with Edwin’s death, she acknowledges that her memories may be faulty, and her wariness may not have been fair. She takes responsibility for her own psychological “baggage,” meeting the challenge with grace, dignity, and compassion for herself and others. Third, she’s willing to change her assumptions about her relationship to the world — to shift away from being an observer and become more of an active participant, and to claim her autonomy and voice.

With our world now turned upside-down because of the coronavirus, I think we all are striving to find our own courage and to behave with grace and dignity and compassion in the face of fear and uncertainty.

I tried to convey that our memories are fallible, and we must admit that we sometimes shape our memories with the stories we want to tell ourselves. We must acknowledge that other people might have fallible memories that are valid, based on the stories they want to believe. Also, a few things happened in my life that reminded me there is no limit to people’s capacity for surprising, brave, profound, heart-altering change.

How about the time that I nearly burnt the house down? It’s true…but it wasn’t on purpose.

I spent a lot of my childhood lost in Narnia with the witches, at Green Gables on Prince Edward Island, on the prairie, in Alaska with the wolves — because often the world inside a book (even with the witches and wolves) felt safer and more comprehensible to me than my real world, which often seemed unpredictable and sometimes downright frightening.

And this is perhaps why stories are the early and permanent core of my being. They organize my life, my psyche, my workdays, my ambitions. And if through my books I can make someone feel like I did back then, if I can lure a reader into Victorian London so completely that she can smell the Thames and hear the clank of the costermonger’s cartwheels over the cobbles…I’ve done what I came to the page to do.

Writer/advocate Gisèle Lewis wants to hear from — and about — her readers.