My Promised Land by Ari Shavit

“I’ve come not to argue but to understand.”

When Secretary of State John Kerry began his diplomatic work, no doubt he approached it with the high-minded, can-do style of his American predecessors. We have to do something fair and rational in the Middle East, he must have thought as he began his energetic and well-meant efforts. I hope he is reading Ari Shavit’s My Promised Land while he pursues his elusive goal, as it explains the inexplicable state of affairs in Israel and the tortured complex history that led it to the present status quo. Shavit’s book is immensely readable; it deals with complex matters with extraordinary fairness and balance; and it provides a bill of factual particulars that will be hard for any other book to equal.

In one chapter, Shavit tells four stories of four Israelis – a professor of politics, a Supreme Court chief justice, a noted literary author, and an escapee from Iraq. The atrocities they and their families endured – emblematic of the Jewish Diaspora after World War II – led them to Israel. The chaos and madness uprooted and destroyed their families and their lives. Their stories put into a comprehensible context the dilemmas of current Israeli society, after “the world had shifted from its natural course.”

Shavit compares their personal stories with his own during the country’s dramatic, early years of Zionism when Israel dealt with “a wave of immigration never experienced by any other state in modern times…a remarkable melting pot.” But the melting pot didn’t melt completely. Oriental Jews claim to have an inferiority complex, and the vast influx of Russians remains insular. The young generation does not share the same utopian commitments of their pioneer parents and grandparents. The unruly process of Zionism created improvised and “imperfect solutions to acute challenges…always adjusting and creating new realities.”

It was also a time when “Palestine vanished and the modern state of Israel replaced it.” But the romantic miracle of its birth and early kibbutz life makes it difficult for Israeli society today to deal with its recent history. Shavit writes: “As it marched toward the future, Israel erased the past.” In doing so, it was inevitable that Israel “expunged Palestine from its memory and soul.” Israelis’ nation-building had to be based on denial; Israel could not afford guilt or compassion at the same time. Yet, claims for refuge in ancestral Palestine are as historic as they are current. 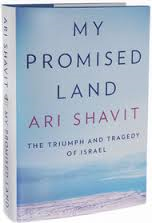 Shavit uses Masada – the 2,000-year-old desert fortress near the Dead Sea where, ages ago, Jews committed suicide rather than die at their enemies’ hands – as a mystical historical metaphor for Israel’s loneliness in a hostile world. He retells the aching story of Lydda as the source of the settlement movement and the conversion of a utopia into the “dark secret of Zionism.” The current Israeli-Palestinian dilemma, Shavit concludes, derives from the story of Lydda and how the loss of Palestinian sovereignty and dignity led to intergenerational revenge oozing from unhealed wounds. “My nation has become an occupying nation.”

Shavit studies and faults the settlements phenomenon, “illegal, immoral, and irrational,” attributing it to the wars of 1967 and 1973. Zealots sought to “bring the Bible to life.” Shavit concludes ominously: “There will be war, no doubt about it” as Israel is entangled in a predicament caused by saving one people “by dispossession of another.”

Shavit describes his personal experiences as a military guard at a Gaza prison as a morally corrupting one: “We are evil in Gaza.” Caught in a circle of violence and counter-violence, “the tragedy never ends.” He describes the evolution of Israel’s reactor in Dimona, its Star Wars “insurance policy of nuclear deterrence,” and questions whether eventually it will “open the gates of a future hell” and become “a cathedral for a tragic modern age,” an inferno.

My Promised Land is a sad book, one of successes and survival; of settlement and displacement; of partition, occupation, and homeland; and of wrenching cruelties, horrors, and inhumanities. It describes a complicated history, and Shavit tells it with compassion, understanding, and honesty, and without polemics. He takes us to villages, kibbutzim, and cities, introducing readers to engaging, interesting people. And he tells their remarkable stories. He explains why Israel is “an ongoing adventure, an ‘odyssey.’”

The humanity of all the contending players we meet is manifest. “I write with my heart,” Shavit says, “to bring back to life different periods of time.” It is hard to see long-term peace in Israel’s future. Israel has become “a state in chaos”; it is “a Jewish state in an Arab world, and a western state in an Islamic world, and a democracy in a region of tyranny.” It is economically strong – miraculously so – but politically distressed. Once an oasis, it is now surrounded and threatened without a peace artner. “We dwell under the looming shadow of a smoldering volcano.”

Shavit’s history of this place he knows and oves is must reading for our secretary of state and anyone else who cares bout peace in the Middle East and wants the cycle of struggle and tragedy to end.

…Or not, depending on your politics.