A Spy for All Seasons

Masters of espionage in the modern age.

The spy novel is always a good read when done with insider savvy and literary quality. In past centuries, books by Rudyard Kipling, Somerset Maugham, Joseph Conrad,
Wilkie Collins, and Eric Ambler were popular, informed, and well-written. University of Virginia professor Frederick P. Hitz taught a course at Princeton on the valuable insights of spy stories, and his book, The Great Game: The Myths and Reality of Espionage (I represent Hitz), compared real spy cases (Hitz was inspector general at the CIA for many years) with those in literature.

Another writer client, DC author Patrick Anderson, wrote The Triumph of the Thriller, in which he cleverly developed the idea that the spy novel — the best ones — changed from genre literature to serious literary fiction in the mid-20th century. John Le Carré made a career of it. Graham Greene and Charles McCarry, I think, are the best in show.

The end of the Cold War and the emergence of the Internet, the cloud, meta-data gathering, and malware introduced a new feature in the world of espionage and, as a result, in the spy novel. The cast of characters is not the dashing heroes of Daniel Silva’s Mossad books or 007 charmers, or adventurous professionals like Charles McCarry’s Paul Christopher.

David Ignatius’ The Director is a very good example. Old-fashioned readers may be left confused by all the Internet exotica, but we’ll get the ideas. Ignatius’ characters refer to WikiLeaks and Snowden as if they are history, as a new CIA director is recruited by the president from the business world to sort out scandal at the agency. The new director inherits a place that was “truly haunted…so many ghosts; so many myths and legends riddling the walls. Not a theme park, but a horror show.” 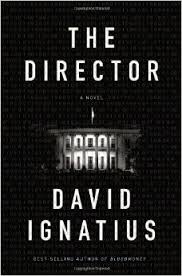 Ignatius’ heroes and villains operate in the “air gap,” electronically separate from the Internet “or any other secure computing systems.” They are “plugged into an energy that wasn’t on the normal grid.”

The issue at the center of this story (CapitaLetters is interested in the issue, more than the story) is “Governments wanted to control the free space of the Internet; hackers wanted to keep it free.” The government and the hackers have to form a symbiotic relationship to exist with one another, at the same time as they oppose each other.

Ignatius’ dysfunctional capital city is out of “House of Cards,” and as the new CIA chief attempts to balance the competing ideals of his agency’s credo — Stealth, Knowledge, Innovation — he discovers the CIA is “the house of broken dreams and ambitions.”

Worse still in this new symbiosis between the establishment insiders and the “out-of-character” web experts, “There are no more black hats and white hats. It’s all the same hat. They’re all working together.” Recruiting is no longer in the Ivy League schools of the Dulles era, but “at hacker conferences and a dozen other viable honeypots for the smart and mischievous.”

These spies, 21st-century style, aren’t bureaucrats out of Greene and LeCarré, but young eccentric super idealists in hoodies, working in cyberspace, following their own agendas, working for and against the establishment. This is the modern challenge — running an intelligence service in an open society.

Still, some things don’t change, whatever the century, in the world of spying. Ignatius’ CIA is as full of spies spying on spies as the agency was in the Angleton era, when mole hunting was the company sport. Ames and Hanson and Pollard slipped past the lie detectors, and the bureaucrats lived in a hall of mirrors and suspicion.

In a telling passage, Ignatius’ young anti-hero, James Morris, walks around Bletchley, the famous place in World War II where U.S. and U.K. allies cracked the German codes in a crucial military coup. He thinks about Alan Turing and other patriotic geniuses of that era who saved civilization from the barbarians. He wonders whether he is “involved in a similar endeavor,” saving freedom with other hackers and whistleblowers from evil bureaucrats.

They fight their battles without bribery or sexual traps, but by assaulting software platforms. They are hyper-intelligent people seeking psychic goals, secretly stealing and using (misusing, too) secret information through the mystery of cyberspace. The Bletchley group, which our OSS participated in, and spawned the CIA after the war, secretly used their talents in a popular war. They weren’t a professional bureaucracy. Today’s spies are different — they don’t serve in a popular “war”; they serve a bureaucracy which itself is inconsistent with the manner and order of business at Bletchley.

Spying, 21st-century style, needs to survive as a cryptological science, it “needed to go geek.” The problem is that “free minds wanted free spaces, too.” It is a marriage made in hell, an odd coupling we are presently sorting out. The novelist may be better at that than the pundit-experts.

Writing for newspapers and writing novels require different talents. David Ignatius has mastered them both. The Director provides reading pleasure and insights into the current world of spying.

Mystery at the Archives

Could punctuation have altered the Declaration of Independence?

An appreciation and critique of “brand” books