How misreading a website led me to an outstanding novel. 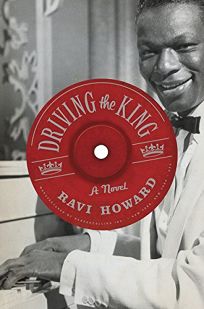 I just started an MFA program, despite my squirminess over the fact that it will be three years full time, and I’ll be closing in on 50 years old by the time I finish.

But no, that wasn’t the accidental part of this journey.

When I found out over the summer that my fellowship assignment would be working with the visiting-writers series, I immediately went to the series website and looked at the roster. Cool, I thought, Ravi Howard, Abigail Thomas, Claudia Rankine.

I knew I should read their work to prepare, but one of my upcoming lit classes also had a formidable reading list, so I had to decide how to best use my dwindling days before the start of the program. Since Ravi Howard was going to be the first visitor, I decided to check out his 2015 historical-fiction work, Driving the King: A Novel.

To be quite honest, I wasn’t sure I’d be able to get into a story set in the 1950s and told from the perspective of Nat King Cole’s personal driver. I enjoy music as much as the next person, but I’m not one of those folks who revels in reminiscing about particular bands and concert venues. And given the protagonist’s profession, I feared I would be slogging through pages of meticulous automotive details only of interest to vintage-car aficionados.

As it turns out, however, Driving the King is much more than the sum of its titular parts. Howard gives us a compelling protagonist in Nathaniel Weary, a fictional character who knows Nat “King” Cole way back from elementary school in Montgomery, Alabama. The boys’ paths diverge after school, but they are still on friendly terms when Weary returns home in 1945 after serving in World War II (stay with me, we’ll get to the 1950s).

Cole comes back to Montgomery on tour, and Weary arranges to take his long-term sweetheart, who stuck with him long-distance through the war, to the concert. He tells Cole about his plans to propose after the show, and Cole suggests building a surprise proposal into the concert. But that night, as the spotlights turn to Weary, he sees that a white mob is about to attack Cole. (Note: Cole was attacked onstage in real life, but a decade later and in Birmingham. But remember, this is historical fiction.)

Weary subdues the attacker closest to Cole while a wider brawl breaks out on stage. Southern justice rewards Weary with 10 years in prison for his heroism, under charges of assault and inciting a riot.

After a decade of grinding labor, which we revisit in flashbacks, he embarks on his new life driving a grateful and practical Cole. After all, in the era of Jim Crow and agitation over civil rights, a black entertainer needs people around him who are willing to take some risks.

Cole and his entourage return to Montgomery, determined to complete the performance cut short by the attack that sent Weary to jail. They work in secrecy, not wanting to tip off any potential white mobs, and the concert is not announced until the afternoon of the performance.

With all that said, the morning of the concert is where the novel actually starts. Howard intersperses the tension surrounding the upcoming performance (will word get out soon enough for African-American fans to see one of their cultural heroes? Or will word get out too soon and result in another attack?) with flashbacks from Weary’s past.

Even though we know from the start that Weary winds up in prison, Howard still manages to create suspense. We feel the years of incarceration grind into Weary’s soul. We are heartbroken when he releases his fiancée from the pain of being a prison wife; we suffer alongside him through 10 years of privation; and we feel the depth of his relief and his family’s joy when he’s released.

Even as we jump back and forth in Weary’s life, the clarity of Howard’s writing keeps the reader situated in the right time and place. More importantly, the restraint of his prose keeps intensely emotional scenes from veering into the maudlin.

There are so many scenes I have learned from as a writer, it is difficult to choose just one to cite. But here is a particularly touching example from the first time a freed Weary sees his father, who owns a taxi business:

I leaned down on his door, and he dropped his head on the steering wheel.

“Yes, indeed,” he said, like he did when…everything was right with the world. “Yes, indeed.”

If tears came, they brought no noise or heaving with them. He stuck his hand out the window and turned up his palm. And I grabbed him. My hands had forgotten the touch of my people, but it had come back in those hours. I held my father’s hand tight, rocked it awhile…

He brought his head off the steering wheel, and looked down the alley and then back and forth. Then he dropped his head once more, this time on my arm. His whiskers and glasses pressed into me. I stood against his taxi, as I had done so many times as a boy, handing him rolls of quarters and dimes and fare slips. My father’s hands were leaner than they had once been. We had both aged more than we should have, and the only muscle left was the rugged kind that clung close to the bone. I couldn’t tell his pulse from mine, and that was better than anything.

Delighted that I’d been guided to this wonderful book, I returned to the visiting-writers program site to check out the next author. This time I happened to scroll to the bottom of the page and noticed some familiar faces. Hadn’t I seen them at a reading last spring? Was this…?

Well, sometimes being proactive isn’t the same thing as being efficient. But do I regret the accidental journey? Not one bit!

By the way, here’s the schedule for the 2016-2017 Visiting Writers Series at American University. The events are open to the public and free (except the suggested donation for the one benefit reading for 826DC). Come join us and hear your next favorite book!

The surprising prescience of Black No More

All Written Up and No Place to Go

Why it's time for you to get onstage