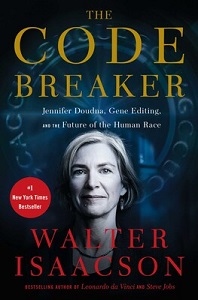 I’m not usually driven to distraction. I typically walk there on my own. But the anti-science bias becoming ingrained among some people in our culture is about to send me around the bend. These folks see elitists under their beds.

I’m particularly perturbed because I’m reading a terrific book, The Code Breaker, by Walter Isaacson. No, it’s not about the elitists who helped us beat the Nazis. It describes a different band of elitists, especially Jennifer Doudna, the brilliant scientist who, along with her French collaborator, Emmanuelle Charpentier, won the 2020 Nobel Prize. They helped discover CRISPR, the RNA-splicing technology that allows the editing of the human genetic code.

(An aside: I wrote a thriller, Splicer, about a mad scientist who uses CRISPR to develop a deadly pathogen in his basement. I have a basic knowledge of the technique, but not until I started reading the Isaacson book did I realize how much work and brainpower went into the discovery. As a result, I have re-edited my book a bit.)

Some people argue that the government has no right to insist they wear masks during the current pandemic. It’s a free country, they assert, so they should be allowed to do whatever they like. And some anti-vaxxers say they won’t get a covid shot because the vaccines haven’t been given final FDA approval. They ignore the fact that many of the treatments given to covid patients also have not received this approval.

Many talking heads are prioritizing finding the origin of the disease over finding the cure. (“Okay, I know your compound fractures must hurt after being run over by that car, but what make was the car?”) Others argue that schoolchildren shouldn’t be forced to wear masks because they have to “breathe.” Who cares if they spread the virus and Gramps later needs a respirator to “breathe”?

Then there are the Marie Antionette “Let them eat covid” politicians worried about their economies, tourism, and re-election prospects. After all, dead people and tourists can’t vote in their states.

Compare the current Luddite environment to how Mary Mallon was treated in 1908. This cook (whose specialty was peach ice cream), dubbed “Typhoid Mary,” infected more than 50 people with the disease in her nickname. Three of them died. She was, like many who have covid, asymptomatic. But when she insisted it was her “right” to keep working, she was forcibly quarantined by authorities. She died after 30 years of almost continuous isolation. Overkill (pardon the pun), for sure, considering the advances in medicine, but still.

In The Code Breaker, Isaacson details the history of gene mapping, which led to the CRISPR breakthrough. Doudna is center stage, but he also extensively profiles Charpentier and a slew of other pioneers and collaborators — including Darwin, Mendel, Crick, Watson, Pauling, Szostak, Venter, Collins, Zhang, Franklin, and Haurwitz, to name a few — whose work may end up saving the human race. Isaacson also highlights the various review processes, conferences, and collaborations among the government, universities, and private industry that, particularly in America, drive technical innovation.

Listen, I know elitists can be a pain in the butt. They think they know a lot just because they have all those fancy Ivy League degrees, Nobel Prizes, and Pulitzers. Go figure. And in interviews, Isaacson, who has also written bestsellers about da Vinci and Einstein, can come across as full of himself.

(By the way, I’m not talking about the know-it-alls, elected or appointed, who, for political and/or financial reasons, get us into wars. They give elitists a bad name and are probably dumber than a rock.)

It turns out that many elitists and scientists are just like the rest us: prone to anxieties, jealousies, and greed. Isaacson describes several rivalries and patent disputes. But competition, friendly or otherwise, is, according to Doudna, “the fire that stokes the engine” and has “fueled many of humankind’s greatest discoveries.”

Many of the people profiled in The Code Breaker have failed romantic relationships, come from broken backgrounds, are iconoclasts, don’t play well with others, and/or have cooties. (I made that last one up, though it could be true.)

But I tend to trust people who know more than I do. I might not invite them to my dining table, but I sure want them holding the scalpel when I’m on the operating table.

Lawrence De Maria has written more than 20 thrillers and mysteries available in print or digitally on Amazon, or at www.lawrencedemaria.com. For the record, he likes peach ice cream, and the only thing under his bed is dust. He thinks.

Not all photos are fake. Except the ones that are.