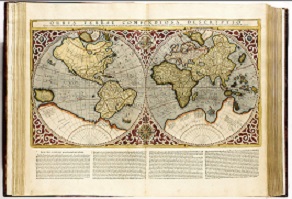 Books about maps are in! Tim Marshall, a former foreign correspondent for Britain’s Sky News, has one of the latest entries with his new book, Prisoners of Geography: Ten Maps That Explain Everything about the World.

Marshall’s book is about geopolitics, and he looks at the maps of 10 regions in the world that are generating most of the news these days and explains how geography often is destiny — an inescapable factor that you can try to cope with but can’t change.

In his 2011 bestseller, Maphead: Charting the Wide, Weird World of Geography Wonks, author Ken Jennings takes a different tack, examining how maps interpret the world for us and why they are so fascinating to many.

Aside from rendering the outer vastness into a compact, orderly, and accessible drawing, maps, Jennings explains, “suggest adventure by hinting at the unexplored.”

He quotes Joseph Conrad’s Heart of Darkness: “Now when I was a little chap I had a passion for maps. I would look for hours at South America, or Africa, or Australia, and lose myself in all the glories of exploration. At that time there were many blank spaces on the earth, and when I saw one that looked particularly inviting on a map…I would put my finger on it and say, ‘When I grow up I will go there.’”

On the Map: A Mind-Expanding Exploration of the Way the World Looks, a 2012 book by Simon Garfield, focuses on mapmaking and how it interacts with our understanding of history and geography. Jerry Brotton’s A History of the World in 12 Maps has more of an emphasis on history as reflected in maps.

(These two writers are British and perhaps influenced by that country’s history managing an empire where the sun never sets, giving them a global perspective.)

The late Scottish writer Andro Linklater brought the subject closer to home as he traced the impact of surveyors on American history in his 2007 book, The Fabric of America: How Our Borders and Boundaries Shaped the Country and Forged Our National Identity. Like his earlier book, Measuring America: How the United States Was Shaped by the Greatest Land Sale in History, it shows how the mundane tasks of measuring distances and setting boundaries influence history.

A more lighthearted look at the history of U.S. borders is Mark Stein’s 2008 book, How the States Got Their Shapes, which goes state by state to explain anomalies like West Virginia’s little finger on the side of Pennsylvania, Michigan’s detached Upper Peninsula, and the unusual bigness of Texas and California.

There is also a fascinating sub-genre of books that remap the country or the world to reflect different cultural and regional fault lines beyond the official boundaries of history.

Joel Garreau’s seminal 1981 book, The Nine Nations of North America, reshapes the U.S., Canada, and Mexico into new nations based on distinctive economic and cultural features. Garreau wrote at the time that this map helped his Washington Post national news team better identify and anticipate trends than did looking at traditional regional divisions.

His book was the model for my own 1994 book, The New Superregions of Europe, which posited that European integration, by weakening national borders, enabled cross-border “superregions” to re-emerge along historical boundaries such as the Hanseatic League around the Baltic or the early Roman Empire along the western Mediterranean.

Other variations on Garreau’s work include the 2010 book by Dante Chinni and James Gimpel, Our Patchwork Nation, which identifies 12 “community types” that are sprinkled randomly across the country and reflect the cultural and political identities within their boundaries. Colin Woodard’s 2011 American Nations: A History of the Eleven Rival Regional Cultures of North America also has a political focus.

One of the more ambitious endeavors to remap the world is Parag Khanna’s brand-new Connectography: Mapping the Future of Global Civilization. Khanna, who was born in India and grew up in the United Arab Emirates, New York, and Germany, has degrees from Georgetown and the London School of Economics and is described as a “global intellectual.”

He lives up to that title with his broad brushwork on the thesis that “connectivity” in a global, multipolar economy is replacing physical geography as mankind’s destiny, and his book is mapping that reality.

Who knows? Maybe some “little chap” (or little lass) is even now looking at the blank spaces on Khanna’s maps and dreaming of his or her life’s adventure.