A love of language motivates a stickler for grammar. 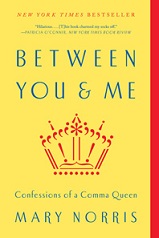 Copyediting has never been a glamorous field in journalism. The largely thankless task of dotting I’s and crossing T’s, meticulous work done on deadline without a byline, has nonetheless been a hallmark of quality publications.

Of course, it is often more than minor tweaks. A skilled copyeditor can take out words, correct grammar, and tighten a story in such a way that the writer thinks his copy hasn’t been touched.

When I was a copyeditor at the International Herald Tribune, we took stories that had already been edited for the New York Times and Washington Post — co-owners of the Paris-based paper at that time — and tightened them further to fit in our much more limited space. It was work I enjoyed, and it helped me immeasurably in my own writing.

Some of the veteran copyeditors from the Times would come over in the summer to fill in — a perk for them, and a big help for us. One very senior editor came every summer, and you could almost picture him with green eyeshades and armbands, a pile of sharpened pencils at hand. We all learned a lot from him, and readers benefited from his anonymous work (and, no, I can’t remember his name).

No wonder one of those invisible wordsmiths was amazed when her book about grammar and punctuation became a bestseller when it was published in 2015. Mary Norris spent nearly 40 years backstage at the New Yorker, a publication noted for, among other things, its obsessive attention to correct style.

Her book, Between You & Me: Confessions of a Comma Queen, tapped into an audience no one knew existed: people eager to learn, or re-learn, how to write with correct grammar and punctuation.

As the title indicates, Norris’ concerns went way beyond commas to some of the finer points of grammar. The affected use of “I” by supposedly educated people when the first-person pronoun should be an objective case “me” is one of the classic mistakes in language, right up there with “its” and “it’s.”

It helped that Norris has a terrific sense of humor — the book was a finalist for the 2016 Thurber Prize for American Humor. And it helped that any New Yorker reader is fascinated by raising the curtain on how William Shawn and his successors work their magic.

Others have ventured into this field. Lynne Truss wrote Eats, Shoots & Leaves: The Zero Tolerance Approach to Punctuation in 2003, and it became a runaway bestseller in Britain. The title shows how a misplaced comma can totally change the activity of the panda on the cover.

Bill Walsh, then the chief copyeditor at the Washington Post, published Lapsing into a Comma: A Curmudgeon’s Guide to the Many Things That Can Go Wrong in Print — and How to Avoid Them in 2000. As does Truss, Walsh keeps his focus more narrowly on punctuation, and, perhaps for this reason, neither of the earlier books is as entertaining as Between You & Me. Truss calls on sticklers to unite, and Walsh really is a curmudgeon. Neither is quite as funny as Norris.

So now Norris has come out with a new book, Greek to Me: Adventures of the Comma Queen. It, too, is a humorous memoir, tracing her early thwarted interest in Latin as it was resurrected in later life into an interest in Greek.

The new book shows that Norris is driven not by being a stickler or a curmudgeon, but by a love of language. She is literate in the most literal sense, spending a good deal of time in this book with the letters of the Greek alphabet.

Most of us know that English owes a good deal of its vocabulary to Greek and Latin, but Norris’ playful approach to Greek shows how a knowledge of that language enriches our own appreciation of English.

And that is why Norris — whose titles at the New Yorker included collator and query proofreader — is, deep down, a writer. When asked at a recent reading how she made the transition from copyeditor to writer, she drew applause when she said that, in fact, it was the other way around: “I’ve always been a writer, it just took me a long time to catch a break.”

Copyediting has suffered in the digital age as newsrooms cut staff and technology puts more of the burden for being correct on the writer. But, fortunately, there are those who remain passionate about language and retain our own interest in being literate at all levels.

[Editor’s note: Click here to read the Independent’s review of Greek to Me.]

Have Guide, Will Travel

Old-fashioned handbooks take you further than you think.