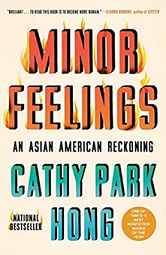 In Cathy Park Hong’s essay collection, Minor Feelings: An Asian American Reckoning, the author interrogates her writing trajectory: “I’ve been raised and educated to please white people and this desire to please has become ingrained into my consciousness. Even to declare I was writing for myself would still mean I’m writing to a part of me that wants to please white people.”

A Korean transracial adoptee, I was raised by white people and for an embarrassingly long time identified with the white psychology. I know how white people think because I thought I was white.

Many foundational American narratives proclaim the power of the individual to shape the world. A vast continent of untamed nature and unexploited resources? Rape the land, pave it over, name it after the things that have just been laid to waste. The people with ancestral ties to the land? Exterminate the brutes. Other people who would manifest their destiny over yours? Shoot ‘em dead.

Looking back at the American books of my childhood, I find that many of my favorites were declarative narratives about the power of the plucky individual to change their world, such as Laura Ingalls Wilder’s Little House series of the settling of the American heartland, teen detective Nancy Drew solving crimes and restoring moral order, Huck Finn and Tom Sawyer being the change they want to see in the world, Dorothy liberating the Emerald City from the tyranny of Oz, the White Horde of male superheroes saving the world time after time…

Beginning writers are told to write what they know, and I knew white men better than I knew Asian women. This was partly due to the deracination of transracial adoption. But it was also due to the cultural landscape of the time. I wrote the novel in 1995, when there were few books written by people who looked like me. Though I majored in English in college, I didn’t read a single Asian diaspora author. I did read plenty of Shakespeare, Thomas Hardy, and Wallace Stevens.

In her TED Talk, “The Danger of a Single Story,” Chimamanda Ngozi Adichie describes how her childhood writings featured snow, apples, and ginger beer, things absent from her Nigerian life but which she knew about from books. Since snow, apples, and ginger beer appeared so frequently in the books she read, it was easy to think that those are the things one must write about, not the actual details of her lived experience. The same logic led me to write a book with a white male protagonist.

But even in my first novel, I could not give my inauthentic white male character the American narrative arc. In my writing, instead of the hero dominating the world, the world dominates the hero. As a transracial, intercountry adoptee, that is my story.

It was 15 years before I attempted another novel. Set in Nagasaki during the rise and fall of the Japanese Empire, it had an Amerasian female protagonist. The manuscript got me an agent. (Two, actually, but that’s another story.)

The rejections were polite, complimentary, and vague, the main obstacle being that editors couldn’t “connect” with the protagonist. Also, there was discomfort with all the foreign names and words, which were considered alienating to an American audience.

I did finally publish a debut novel, Famous Adopted People, but the road was paved with rejections from editors who again couldn’t “connect” with the protagonist, an adoptee who wasn’t like the adopted characters in bestsellers. Somehow, narratives written by non-adopted writers made my adoptee story inauthentic. The editors had a “single story” about adoption and were uninterested in widening the lens.

I returned to historical fiction for my next novel. This one doesn’t take place in a foreign country but the U.S. and portrays an underexplored chapter of American history, the internment of Japanese Americans during World War II. It’s a timely story, and the protagonist is one of those exceptional individuals Americans love, rising from obscurity to earn fame and fortune.

But my hero, the artist Isamu Noguchi, does not change the world. The story is about his inability to bend the narrative arc his way. He leaves the internment camp a changed man, swearing off political activism and figurative art.

This is not the “single story” that publishers crave for historical fiction about people of color. They want, as Adichie says, “no possibility of a feeling more complex than pity.” Hong writes:

“In many Asian American novels, writers set trauma in a distant mother country or within an insular Asian family to ensure that their pain is not a reproof against American imperial geopolitics or domestic racism; the outlying forces that cause their pain — Asian Patriarchal Fathers, White People Back Then — are remote enough to allow everyone, including the reader, off the hook.”

Rather than recognizing the universality of the human experience, the “single story” reduces the marginalized to tropes for the titillation of a white audience. In order to get to a truly representative American literature, publishers must heed Adichie’s admonishment, “Many stories matter.”