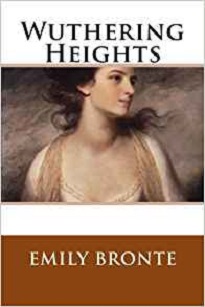 “Wuthering Heights is not a love story!” cry some critics and a few disappointed readers from their cyber spaces. The probing thinkers among them go on to articulate what they think Wuthering Heights is, if not a great romance, and some of them wield convincing arguments about revenge, obsession, and class conflict.

Too many articles from camp not-a-love-story, though, skip interpretation altogether and, in crotch-numbing fashion, spring to diatribes about Heathcliff’s “sociopathy,” concluding that Heathcliff and Catherine’s relationship fails the litmus test of their received ideas on love, the sort that trickle down from 1 Corinthians.

Of course, Emily Brontë lets readers know up front that Wuthering Heights will not be embracing a Judeo-Christian view of love, as when young Catherine Earnshaw flings her Bible into the dog kennel, saying she hates “a good book.”

If we don’t get the hint at this juncture, there are plenty more to follow: Consider the example of Joseph, the longtime servant at Wuthering Heights proper, a fervent believer and regular churchgoer who used to preach to Catherine and Heathcliff when they were children.

Did Brontë render Joseph’s dialogue in indecipherable northern dialect to mute the Christian voice in Wuthering Heights? I believe she did. Hareton, the least cultivated (and least Christian, next to Heathcliff) character, speaks roughly, too, but always with perfectly clear language.

We needn’t brave the sharp rocks between theology to amoral philosophy to recognize that love, however brutal, is alive and not completely well in Wuthering Heights. To understand how this fiendish romp still qualifies as a “love story,” all we need is to recall our most meaningful bonds and respond truthfully whether there were inklings of selfishness behind our sacrifices and a possessive hunger, however mild, gurgling at the periphery of our most tender moments. This book, like all Great Books, is about us, and I suspect its most passionate detractors are those who haven’t come to terms with the acidic soil of life.

Brontë, who once wrote, “Every being must be the tireless instrument of death to others, or itself must cease to live,” goes to the extremes of these psychological lowlands and whips up not just a challenging, tragic love story, but multiple love stories — with an incestuous family-of-origin (and family-of-adoption) drama at its hard-to-reach, blood-soaked center.

When Mr. Earnshaw brings home an orphaned “gipsy” child and names him “Heathcliff” after his deceased son, he sets off a bomb that will scramble and redefine three generations of Earnshaws.

Heathcliff, the black-haired, black-eyed child who babbles in a foreign language, absorbs the Earnshaw family on arrival: He replaces his namesake, usurps big brother Hindley Earnshaw by becoming Mr. Earnshaw’s new favorite, and merges with Catherine Earnshaw as twin/lover.

Down the shrub-strewn lane to Thrushcross Grange, the well-brought-up neighbors, Edgar and Isabella Linton, are the brother-sister duo who represent the light to Catherine and Heathcliff’s darkness. Years later, when the sibling pairs are broken up through a marriage interchange — Catherine to Edgar and Heathcliff to Isabella — the acrimony between Heathcliff and Hindley will expand along the moors to include Edgar, forming a three-point feud.

Catherine, meanwhile, away from the bacchanalia of Wuthering Heights, can only bear the stable and conventional Grange by bending the obliging Lintons to her caprices. Catherine’s decision to die on demand after Edward gives her an ultimatum not to see Heathcliff anymore makes her a poor substitute for his sister, Isabella.

And Isabella, too, makes a poor substitute for Catherine in her tenure at the Heights: She doesn’t share in Catherine’s love for Heathcliff despite marrying him in a shotgun wedding, and becomes one of only two characters to flee the Gimmertown-Grange-Heights triad. While Heathcliff returns from his own sabbatical with money, social standing, and revenge plans, Isabella can only come back through the next generation, in the form of her beloved and ailing son, Linton Heathcliff.

As with Isabella, mothers (and fathers) die in Wuthering Heights, leaving the Earnshaw nanny, Nelly Dean, with ample job security. Nelly, who is principal narrator and arguably the most central (and most morally ambiguous) character in the book, rears Catherine and Heathcliff and, later, Hindley’s son, Hareton.

Nelly will go on to rear little Cathy Linton, too, but it’s clear Nelly has mixed feelings about her “substitute” children, the Earnshaw descendants. That is, all of them but Hareton, whom she loves unconditionally and gets torn away from in chapter four, when she’s ordered to accompany Catherine to the Grange.

Of all the violent scenes Wuthering Heights inflicts on its readers, none is as painful as Nelly’s visit to the Heights when her sweet Hareton doesn’t recognize her: “Hareton, it’s Nelly! Nelly, thy nurse.” A true mother, Nelly feels grief instead of anger when Hareton, already under the grim teachings of his Uncle Heathcliff, launches a rock at her head.

It’s with this new generation in the second part of the book — Hareton Earnshaw, little Cathy Linton, and Linton Heathcliff — that the family drama of Wuthering Heights soars into full concert, creating a three-part harmony together with the story’s atheistic base and its gothic tenor of love beyond the grave. (Trios appear to be important in Wuthering Heights.)

Anyone of a certain age will know too well how family traits and temperaments snake from one generation to the next, forging likely and unlikely allies and rivals. Both little Cathy and Linton strongly resemble (and sometimes act like) Edgar and Isabella, so Heathcliff naturally hates them, even though Linton is his own, and little Cathy is Catherine’s.

Who, then, will be Heathcliff’s heir, the beneficiary of a lifetime of hateful and lucrative schemes to dominate the Heights and the Grange?

Hareton, the son of Heathcliff’s enemy/brother, looks more like his Aunt Catherine than his father, Hindley, and thus unknowingly endears himself to Heathcliff, who, no matter his bitter plans, will come to see Hareton (in his own cruel way, of course) as an adopted son.

And how could he not? Though Heathcliff reduces Hareton to the level of servant, his treatment of Hareton is a loud echo of what was once done to him by Hindley, thus forging Hareton as the “new” Heathcliff.

It’s Hareton, the sensitive brute, who finally breaks the cycle of family violence by developing Stockholm syndrome — loving his captor, Heathcliff — instead of embracing the well-trod Earnshaw/Linton coping mechanism of finding a substitute. After Heathcliff travels back to his beloved Catherine on a cold bed of rain, Hareton alone will mourn him, and quite unironically so for readers who follow the amoral logic of the story.

With the master and oppressor gone, and little Cathy widowed after Linton’s death, there’s no one left to marry but her other cousin, Hareton — who is not a substitute, but someone she genuinely cares for against reason and social class and incest taboos (doesn’t that sound familiar?) — now sole proprietor of the Heights and the Grange. Luckily, they will avoid in-law problems by having the same mother — Nelly, their servant/matriarch.

And you thought your family was strange.

Dorothy Reno is a senior editor and classic-books columnist for the Washington Independent Review of Books. If you would like to share your own take on Wuthering Heights, we’d love to hear from you in the comments section below. You can join Dorothy in reading The Tenant of Wildfell Hall, by Anne Brontë, which will be the subject of her next column.