Discover your next favorite book by ear 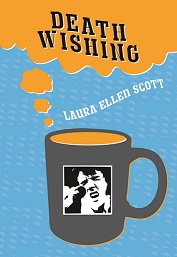 Welcome to Washington, DC, land of a million literary events! People like us who love to read are often on the lookout for new authors and books, and readings are a great way to discover them. But which of the million events do you attend? Two organizations that consistently deliver compelling new reads are the Writer’s Center and the Hurston/Wright Foundation. Below are four books, from older to newer, that I’m grateful to have found through local readings:

Death Wishing: Author Laura Ellen Scott had the foresight to include the date and location when she signed my copy of Death Wishing: February 26, 2012, the Writer’s Center. She must have known I would be writing this article four years later, which would not be a surprise given the quirky, supernatural nature of her work. In the New Orleans of Scott’s imagination, wishes do sometimes come true — but only if you’re dying. Random deathbed wishes spawn changes such as permanently orange clouds, mothers with actual third eyes in the backs of their heads, the total elimination of all cats, and the triumphant return of Elvis. Rest assured, this is NOT one of those books that lures you in with an interesting theme only to disappoint with weak writing or well-worn tropes. The characters are engaging and believable, and Scott spins her tale with a perfect blend of whimsy and heartache. You’ll find the same deft balance of humor and pathos in her new book, The Juliet, a supernatural-western-mystery following a cursed emerald through time and multiple doomed owners.

Domestic Violets: That 2012 reading at the Writer’s Center netted not one, but two books I’m glad to have on my shelf. Domestic Violets is the debut novel of the very funny Matthew Norman. What in other hands would be a pedestrian midlife-crisis novel — a frustrated writer with erectile dysfunction, a mind-numbing corporate job, a pretentious nemesis at work, a dangerous crush on a younger colleague, and his Great American Novel manuscript moldering away in a drawer — shines with Norman’s wit and cleverness. His protagonist sets himself up for disaster with some ill-advised decisions, but his sense of humor wins you over as he teeters on the edge of right and wrong. This is probably the only time you will see the phrases “likeable protagonist” and “contemplating cheating on his wife” in the same review from me. Norman’s new book, We’re All Damaged, continues his brand of sardonic-but-sweet humor as a man finds his post-divorce footing. Our very own Holly Smith agrees.

The Residue Years: Last spring, I went to a Hurston Wright Foundation reading at Sankofa Café to hear one author and wound up falling for another. From the first vibrant, code-switching words out of Mitchell S. Jackson’s mouth, I knew I had to read The Residue Years. This closely autobiographical novel is set in Portland, Oregon, but it was more than my personal connection (I have family there and lived there for a couple of years) that struck me. Jackson humanizes the people behind the headlines of the crack epidemic of the 1990s, drawing you in through the story of a mother and son who struggle to stabilize their lives in a sea of drugs, violence, and incarceration. His protagonists dispel the myth that you can’t be both erudite and street; Jackson had me running to Webster’s Dictionary and the Urban Dictionary at the same damn time. You root for his characters, hurt with them, and feel your heart break when they take a wrong turn, whether at the hands of fate or their own doomed decisions. I’m definitely keeping an eye out for his next book!

The Moor’s Account: The Hurston Wright Foundation struck again later that fall, this time at their Legacy Award Nominees Reading at Busboys and Poets in October 2015. Laila Lalami’s brilliant historical fiction novel The Moor’s Account went on to win the 2015 Legacy Award, as well as a ton of other awards, and is every bit worth the recognition. Lalami reconstructs the journey of Mustafa al-Zamori, the first black explorer of America, as he forges through 16th-century Florida attached to a party of Spanish explorers. Enslaved to a conquistador, the real-life al-Zamori was mentioned only briefly in the official account of the expedition, yet Lalami, through her extensive research and imagination, has created a vibrant saga of shifting loyalties and power dynamics amidst the wonder and cruelty of the “discovery” of the New World. And because I tend not to gravitate toward historical fiction, this book was a new voyage for which I’m grateful.

By now, you surely must be thinking, “There are more than these two organizations around.” Why, yes, there are, and I’ll write about more in upcoming columns. Until then, keep on reading, writing, and listening to all the books around you.

With a BA in English and an MA in German, Tara Campbell has a demonstrated aversion to money and power. She is the flabbergasted and grateful recipient of the 2016 DC Commission on the Arts and Humanities' Larry Neal Writers' Award in Adult Fiction. And she emphatically denies that going to readings is all about avoidance of manuscript revisions.

The popular creativity-fest celebrates all things literary, too!