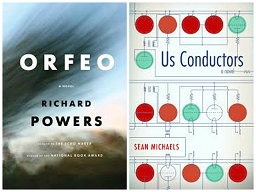 No worries, Angie Merkel. Big Brother has progressed from eavesdropping on heads of state to hunting musicians. The feds are chasing a classical composer turned amateur scientist in Richard Powers’ Orfeo. In Sean Michaels’ Us Conductors, it’s a conductor/scientist framed by the NKVD.

When two novels published within months of each other pit a musician-scientist against the mighty state security machine, it’s time to catch the tune.

Orfeo, longlisted for the Man Booker Prize and the National Book Award, features protagonist Peter Els, a has-been composer on the lam from Homeland Security. How did a scruffy, underrated, reclusive composer invoke the ire of America’s giant security agency?

For kicks during retirement, Els decides to take up microbiology. He’s been altering genes with the fervor of a 10-year-old boy exploding a basement chemistry set. But what Els ends up blowing up is his life as a private citizen. His crime: calling emergency personnel to report the death of his dog, Fidelio (more on the late dog’s name later). The law shows up and starts taking a serious sniff around. Realizing his hobby has all the hallmarks of bioterrorism, Els goes fugitive.

Almost a century earlier, protagonist Lev Sergeyvich Termen gets ensnared in the Soviet spy apparatus in Us Conductors, shortlisted for the Giller Prize. Termen is the inventor of the theremin, an electronic contraption that imitates the sounds of traditional instruments. (To play the theremin, performers wave their hands between two antennae over a gizmo that modulates electronic frequencies that generate pitch.)

In 1927, Termen moves to New York with his revolutionary handler, Pash. Repackaged as Léon Theremin, Termen achieves minor notoriety from his public appearances “conducting” his instrument. Less than successful are his efforts to transform his invention into a profitable enterprise.

In the meantime, he falls irredeemably in love with a violinist named Clara, his most accomplished theremin student. Termen gets into some very big trouble, especially after Pash is upstaged by two thugs with identical names (Karl and Karl) from Stalin’s NKVD. Lev/Leon narrates his story as he’s sailing back to Soviet Russia in protective custody, accused of unspecified, anxiety-inducing charges that appear to concern his clumsiness as an unwilling double agent.

Lev Termen is a real historical figure. He not only existed, he invented the theremin. His narrative is set against frighteningly real, ominous Soviet oppression. Lenin himself makes a cameo and comes back to haunt late in the book.

In Orfeo, Powers employs historical reality as well. Every musical reference is real, as are most of the composers against whom Els measures himself.

Els’ backstory unfolds as he flees cross-country, mentally reconnecting with the key relationships in his life: his parents — particularly his father — his mentor (fraught with artistic and personal baggage), his two great loves, and his daughter.

To say Orfeo is saturated with musical references is to say Stalin was paranoid. In addition to the novel’s deep dive through 20th-century classical composition, every page, every paragraph vibrates with lush musical terminology in service to the plot.

Here’s life at 60, according to Els: “All that wandering through distant keys, doubles back to tonic.” His description of the massive government security operation that has him in its crosshairs: “Thousands of moving parts of the digital passacaglia.”

Even Els’ deceased dog, Fidelio, threads the musical theme. “Fidelio” is Beethoven’s only opera. As its title suggests, “Fidelio” is about truth and fidelity, but it is also about their opposites. The opera’s title character disguises herself as a man and lies for the greater good.

Els enacts a minor variation of this in Orfeo. To discover who he really is, he knowingly evades the law. Beethoven wrote four separate overtures to “Fidelio” in his efforts to satisfy an irritable public. Els engages in a parallel struggle; he spends the novel rewriting his own story of origin, all while listening to the music of his past.

Termen, too, hears the music in Us Conductors. He goes to concerts and describes compositions with which he’s intimately familiar. When he plays chamber music with his adored Clara (he always speaks directly to her via the second person), the violin is his madeleine: “Wood from the taiga, gut from a thin Romanov sheep. I remembered the rooms in which I had been raised, the varnish on the floorboards.”

But just as Orfeo covers much more than the life and loves of a midlist composer, Us Conductors is not really about music. It may not be a stretch to understand how errant scientists get crosswise with the government, but musicians? What’s all that music doing?

To begin, let’s note that neither Lev Termen nor Peter Els is a member of music’s rank and file. Here’s the difference between Termen’s invention and traditional instruments: “Playing the violin, the body is a musical connection between bow and strings. The same with trumpet, with clarinet, with piano: lips, tongue, hands on mouthpiece, reed, keys. You are stayed by touch. The theremin player is loose, untied. There is no tether.”

It’s no accident that when Lev makes his New York debut, composer Sergei V. Rachmaninoff and conductor Arturo Toscanini are in the audience, highly threatened. These two men “were imagining, I am certain, the chopping and splintering of scores of cellos, violins, and trumpets, rendered obsolete by the theremin’s ethereal tone.”

Something about the theremin is subversive; it’s upending an old order. Paramount, from a literary perspective, is that to play a theremin is to conduct.

What’s the job of a conductor? He or she is in charge of the orchestra, setting the rhythm, cuing entrances; in short, masterminding the musical interpretation. No matter how competent the instrumentalists, the conductor is boss. Lev fully embraces this concept. In one of his low moments, realizing that he’s being “propelled by outside forces,” Lev says, “I was in play. I was Lev Sergeyvich Termen; I thought, conducted.”

To return to Peter Els, road-tripping his way through memory and Homeland Security’s tightening noose. Els is a composer. He’s the creator; he writes the music that others have to render. Skirting economic realities inherent in that line of work is the notion of agency or authority. So, too, for a conductor.

Orfeo would be much less compelling if Els had sat in the back of an orchestra’s second violin section, just as Us Conductors would have lost its mojo if Termen had ended up playing sax in one of his beloved Harlem swing bands.

Both protagonists take on the establishment, however unwittingly — and however unsuccessfully.

Almost in spite of themselves, they are empowered by their creativity. They both resist the slide to becoming defenseless pawns of government oppression. Els figures out early on that he’s in grave danger. Rather than turn himself over, he takes a long, hard look at his life, on his own terms, and in his own time.

In other words, he asserts control.

Freezing, starving, and tortured in the Gulag, Termen acts similarly. He fights back physically and mentally. “Here was a machine; I would try to figure it out.” Deploying his scientific knowledge, he calculates how to make his backbreaking work more productive.

He is noticed by the major in charge. Sitting in the major’s office, Termen suggests forming an orchestra. A group of 11 “rag-wrapped” prisoners is assembled, with Termen as their conductor. “What did I know of conducting?” he asks. What, indeed.

Conducting Ravel’s “Boléro” grants Termen psychic escape. “We were not in Kolyma; we were on a Mediterranean hillside, in a Spanish court. We were wearing bright colors, with carafes of red wine.”

But, Termen says, the real escape the music allows is into memory. “Sometimes it is like this, listening to the music:the steady bars let you separate from your body, slip your skin, and you are standing before the shuttering slides of memory. Shades of light, skies filled with cloud, old faces.”

Incidentally, memory is what’s captured in Orfeo’s title. In parallel with his mythical counterpart, Els searches behind him to retrieve his beloved, which, in Els’ case, appears to be an honest assessment of his life and loves, as opposed to a single person. (Although his daughter is damned important.)

Did I mention these books are nothing alike? I have no confidence that readers who cotton to one would be drawn to the other.

Writing in short, declarative sentences, Sean Michaels lays out his story, moving between past and present with deceptive simplicity. Richard Powers uses a thicker palette, drenching his book in music’s technical vocabulary, writing in densely constructed paragraphs, leaving it to the reader to piece together the plot from within the vast esoterica of musical composition. Orfeo is gorgeous, but reading it takes some work.

So why compare the two? Both books understand that music can threaten the state. In the same way that the Man deplores dangerous books, the Man can be scared silly of dangerous music. Protagonist Peter Els gets it. While he’s on the run, he plugs his smartphone into the car stereo and chooses “Music that will get him as far as he needs to go. Shostakovich’s Fifth — a condemned man writing the accompaniment to his own execution.”

Is there a piece that epitomizes more the precarious tightrope between state-mandated “art” and treason? Music historians are still trying to decide whether Shostakovich was an instrument of the Party or its victimized opponent. (Likely, he was both.)

Lev Termen gets it, too. Toward the end of Us Conductors, when the repressive Soviet state constricts his every move, Lev takes pains to identify himself to the authorities as a scientist, not a musician, as if he’s acknowledging that music is the riskier business.

Both Orfeo and Us Conductors pair musical metaphor with industrial-strength irony. Both are firmly grounded in reality. Both present somewhat bumbling heroes, nominally engaged in innocuous music making, who come up against an all-powerful government security apparatus.

It’s no surprise that writers write in the context in which they live. Consider ours. Not a day goes by where we are not deluged with sobering news about the government’s listening machine, spreading like toxic ooze over every aspect of our lives.

Small wonder, then, that in the middle of 2014, two unrelated protagonists who try valiantly to face down the state’s leaden intrusion into their lives find their way to the page. The truth, it turns out, is in the music.

Martha Anne Toll is a professionally trained violist and a writer. Her work has appeared on NPR, in the Millions, Narrative Magazine, the Washington Independent Review of Books, and Wild: A Quarterly. She is the executive director of a nationwide social-justice foundation based in Washington, DC. Follow her on Twitter at @marthaannetoll.

The Mystery Writers of America recently announced the nominees for this year's Edgar Allan Poe Awards. Winners will be named May 1, 2014, in New York City.

What to buy for that hard-to-buy-for reader on your list.