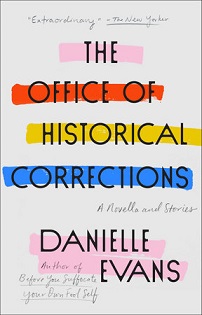 The words of Danielle Evans sneak up on you. You might be reading a story employing deceptively straightforward, factual language ostensibly about visiting Alcatraz or attending a wedding or filming a music video and suddenly, bam! — here come lines like this:

“‘You have no idea how much you take for granted,’ my mother told me the first time I’d brought a white friend home to play. But she was wrong about that — you take nothing for granted when the price of it is etched across the face of the person you love the most, when you are born into a series of loans and know you will never be up to the cost of the debt.”

Evans’ writing is quietly forceful under any circumstances, but I read The Office of Historical Corrections through the dual lenses of covid-19 and the civil rights protests that have swept our country (and the world) during the last two years. As a woman of color raised in a decidedly liberal environment, I find it has been a struggle — albeit a necessary and important one — to accept how truly unjust the United States remains.

Although I aspire to address these injustices through activism and volunteering, it can be tiring work; this book offered me a safe way to examine important issues through a different but no less powerful medium. The author situates themes of loneliness, family, and racism in seemingly mundane surroundings — such as that of an undergrad who unthinkingly dons a Confederate-flag bikini to impress a summer fling:

“‘You’d look so hot in this,’ he says. She does look pretty hot: like someone she is not, what with the stars and bars marking her tits and crotch, but like a hot someone she is not…‘You look like white trash,’ [her stepmother] Puppy says to her the first time she sees the bikini. ‘You would know,’ Claire says back.”

When a photo of her thusly garbed circulates online, Claire finds herself the center of a fierce debate at her college — one that seems both much larger than and completely abstracted from her (“She wasn’t wearing the bikini to bother Black people — for Christ’s sake, there were none in her father’s new neighborhood even if she wanted to — but to bother Puppy, who is half racist anyway, which makes her aggrieved reaction doubly hilarious.”).

Like most characters, Claire is less one-sided than she initially appears (though she remains, in many ways, unlikable). I appreciated the depth and contradictions with which Evans imbues the men and women she writes about; it reminded me of one of the best tools I employ when dealing with injustice: empathy.

Before we go any further, let me clarify what empathy means to me — or, rather, what it does not. Empathy does not make me a doormat; it does not require me to subjugate my sense of worth to engage in an intellectually dishonest argument or to endure disrespect at the hands of someone angry and vengeful.

That said, I do believe strongly in empathy as described by Barbara Kingsolver: “Empathy is really the opposite of spiritual meanness. It’s the capacity to understand that every war is both won and lost. And that someone else’s pain is as meaningful as your own.”

In her work, Danielle Evans offers up examples of humanity that is both winning and losing. And that, in turn, allow us to examine our own complexities. I am eager to carry her words and her message along with me as I move forward with my own activism and learning.