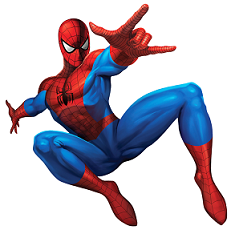 Often, I am unsure while watching anime, playing video games, or reading comic books, whether I’m secretly writing poems or secretly avoiding writing poems. Writers can be marvelous myth-makers about their own process, and I am no exception.

Maybe I’m simply justifying, after the fact, a constellation of activities that many folks would call frivolous: a kind of low-culture solipsism.

As a child, I used to imagine how Spider-Man might swing around the feeder roads and endless concrete hydras of freeways in Houston. Riding along I-10, I would press my cheek against the backseat windows of my mother’s Honda Civic and pretend that the web-slinger would zip from telephone pole to telephone pole, having only two mono-directional choices each time: forward or backward.

Then, when we entered the lacuna of a parking lot, or a chain of front lawns, I’d imagine Spider-Man could fly on web-wings between his arms and abdomen. The year was 1989. I was the only black kid in my kindergarten class. Was I already writing a poem?

Years later, I would write a poem called, “The Silver Screen Asks, ‘What’s Up Danger?’ After We Enter,” about bringing my son and daughter to see “Spider-Man: Into the Spider-Verse” and trying to explain our Afro-Latinx connections to this fictional superhero, Miles Morales. I’m not sure either of my children understood, but that moment as a family and the euphoria of the film became a poem.

When did I begin writing the poem? On the drive to the theater? In the silence after saying to my kids, “We are Afro-Latinx, but many folks won’t recognize that for you two, and that’s not your fault”?

For both poets and nerd cultures, there is a sense of initiation when one begins to “enter the club.” Sometimes, fellow writers and fellow nerds are welcoming, believing in a relative strength in numbers. Other times, people are lusciously suspicious, wanting to test the supposed authenticity and level of commit of the newcomer.

So much signifying happens all around. But, before a person declares themselves a part of either of those tribes, hasn’t a separate initiation already occurred?

For me, it was a high-school friend inviting me to watch “Dragon Ball Z.” Or it was a classmate in kindergarten, Avital, who taught me to gamble with a dreidel before my older brother would teach me to shoot dice.

Avital loved the character Venom, and I remember he was one of the first kids to invite me to spend the night at his house. We read Venom: Lethal Protector. What poems were being written on us both as we woke early to read the next panels? What did we know of antiheroes, vigilantes, or symbiosis? We were 5, and the year was 1989.

It’s now 2019, and I am still unsure of where poems begin. Perhaps there is some magic in a lack of certitude, but I am increasingly convinced that poems aren’t awe-inspiring because they are mystical; rather, in the same fashion of a friendly neighborhood Spider-Man, their masks can be removed, their sense of power and responsibility held in balance.

They can swing. They can fly. We can still imagine them moving along the telephone wires between us.

A Poetics of Save Points

Or, in defense of video games.