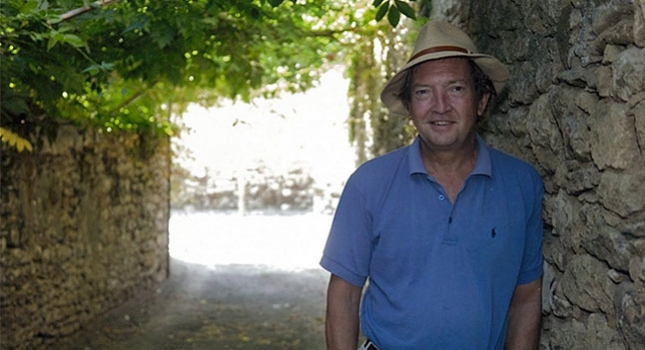 One can eat and drink his or her way through Martin Walker’s entire Bruno series, launched in 2008. Benoit Courreges, aka Bruno, is a decorated former soldier and now the (mostly) content policeman in a bucolic small town in the South of France. The series is a passionate valentine to the splendors of the slow life: walking through the pastoral countryside, engaging in friendly gossip at the farmer’s market, or enjoying an inspired wine and cheese partnership at the corner bistro.

Walker, who lives in France and Washington, DC, is not the kind of fellow one might automatically peg as the author of a gentle, character-driven series more about the ebb and flow of life in a small town than it is about crime. That’s not to say the crimes aren’t interesting and well-researched. They certainly are and have the citations to prove it. But they generally take a back seat to getting to know a cast of interesting characters in St. Denis, France.

Walker is a senior fellow at the DC-based Global Business Policy Council, a private think tank for CEOs of major corporations. The former international affairs columnist for UPI, he’s amassed an impressive array of nonfiction works, including The Cold War: A History; The Waking Giant: Gorbachev’s Russia; and The Iraq War.

But it’s the Bruno series that’s held most of his attention since the publication of the first, Bruno, Chief of Police. Walker and Bruno are back now with the sixth in the series, The Resistance Man. Once again, the tranquility of life in Bruno’s village is threatened by forces both inside and out.

A final note. If you’re considering diving into this series, and I think you should, I suggest you mull this single line from a Bruno adventure: “‘I’m worried about the missing guns,’ he said over the cheese course.” If you like that line, you’ll like Bruno. Think of it as a literary litmus test.

*****
Was
there a single inspiration for the Bruno character?


For 15 years, we have had a house in the Périgord
region of France, where I came across a wonderful character, my tennis partner
and dear friend, Pierrot. He is also our town policeman, a great cook, and a hunter.
He’s my guide and teacher on French cooking, hunting, how to train dogs, make
jam, and enjoy the splendidly relaxed and convivial way of life. He’s a man who
understands the difference between the law and justice, and he keeps the peace
in an admirably low-key way. He’s older, married, and quite a bit plumper than
Bruno, but, like Bruno, he’s a former soldier who spends his spare time
teaching schoolchildren to play rugby and tennis. We have no crime, because all
the kids grew up knowing him and would hate to disappoint him. It made me want
to write about someone wise and civilized like that, and the first Bruno book
followed.


You do research for the Bruno novels, too, but how do you approach writing the series as opposed to your very different nonfiction work?

The synopsis I write for a Bruno book is much more detailed, with character notes, twists and turns in the plot, descriptions of scenes, snatches of dialogue, and so on. And the research is much more focused on the particular theme I’m exploring. Usually it takes me to the Centre Jean Moulin in Bordeaux, a massive archive on the French Resistance in WWII. But I also visit the National Archives in Paris, where I needed to get the detail on the witchcraft trial of Madame de Montespan, the mistress of King Louis XIV. A lot of the research is in the form of interviews with local people, which usually becomes very convivial, and some of it happily takes me to restaurants and vineyards.

Many of the Bruno adventures center on the inability to bury the past forever. What attracts you to that theme?

As Faulkner said, “it isn’t even past.” Events in the past shape what people do in the present, and I’ve always been fascinated by history, which I studied at Oxford. There’s probably nowhere on earth that encapsulates more history than the valley of the Vezere, from prehistoric times and the famous cave paintings of Lascaux, 17,000 years old. The Gauls made wine here before the Romans came (and the Romans even tried to ban French wine because it was undermining the local Italian wine makers), and in Périgueux, near our house, there’s a Roman amphitheater that seats 20,000 people. Then came the Arabs on the way to defeat at the hands of Charles Martel, then the Vikings came and burned Bordeaux and Bergerac, and then the English — for three centuries. So we have endless history, plus the Resistance.

It’s a key part of the unique charm of the Périgord and along with its food and wines, its warm and gentle climate, its enchanting landscape and lovely old stone buildings and friendly people, it adds up to a little corner of paradise and I love it dearly. So if my books are not just crime novels, but also a little bit travel book and a little bit cookery and a little bit history, they are also, in a way, love letters to a unique part of the world I now call home. But the theme I also try to bring in is about the impact of globalization on a small rural community. Whether national politics, European rules on food and farming, American wine corporations, terrorists, arms dealers — the threat to a charming way of life always comes from outside, and Bruno has to protect his town and his people.

What kind of questions do you get from readers at events?

Writing is a solitary business so it’s always a pleasure to get out and meet the readers. They usually want to know if I can cook the meals I have Bruno prepare (yes, I test each one under my wife’s expert and watchful eye). I love to cook, but I’m not in the same class as my wife or Pierrot, my policeman friend. It’s a wonderful hobby because I’m always learning, and it gives friends and family so much pleasure. It made me start my own vegetable and herb garden, and now I’ve even started keeping chickens to produce my own eggs with glorious golden yellow yolks.

I call my cockerel Sarko, after the French president of the day, and all the hens are named after women politicians. So far, Angela Merkel lays the most eggs, Margaret Thatcher is the bully who gets to the food first, Hillary Clinton will eat anything, and Carla Bruni is the pretty one.

Readers also want to know if my French village is as I describe St. Denis (yes, pretty much). They always ask where I get my ideas (from history books, newspapers, interviews, and happenstance). They usually ask if there are any plans to film Bruno (yes, a Franco-German TV series is underway).

Sometimes I’m asked if Bruno is going to settle down with any particular woman from the books. I can only reply that I don’t know; he hasn’t told me yet. One thoughtful chap at Politics and Prose urged me to bring in the First World War and the great flu epidemic of 1918-19, which is a great idea if I could only think of a way to make it work.

“Freedom Fries” aside, have you seen American attitudes toward the French people change over the past decade or so. I’m paraphrasing, but the Washington Times called your books an important reminder to Americans about some of the many positive qualities possessed by the French.

I was touched by that review, which I thought very insightful. I think that many Americans have had second thoughts about the wisdom of the Iraq War and perhaps now understand why the French opposed it at the U.N., which triggered a lot of resentment about “cheese-eating surrender monkeys” at the time. The French are back as full members of NATO, which may also help, and many American visitors know that they do keep a wonderful country.

I find a lot of similarities between the French and Americans; each nation is convinced they are an exceptional country. The French firmly believe that their Revolution of 1789 and the Rights of Man gave birth to the modern world, while Americans believe the key event was their Revolution of 1776, whose outcome relied on French help. They are both right, of course, even if they tend to underestimate the impact of Britain’s industrial revolution. I find the French fascinating, so like us and yet so subtly, fundamentally different.

How do you develop characters? Do you write any kind of backstory for them that may not appear directly in the book?

In a series such as Bruno, characters grow almost organically as the books progress. I wish I were smart enough to have it all planned in advance, but I’m not. I had no idea when I first wrote about Dr. Fabiola that she would become such an important character, and I never dreamed that Bruno would have an affair with “the mad Englishwoman,” nor that he would take up horseback riding, nor that Isabelle would keep re-appearing.

I don’t write a backstory for them, but I do find that they have minds of their own. In one book, I planned to have Bruno seduced by a femme fatale. When it came to writing that scene, it was as though a force field came from the laptop. Bruno simply refused to drop his trousers for her, so it was back to the drawing board.

The town mayor is one of my favorite characters. How did you come up with him, and what do you think is his role in the narrative? He’s Bruno’s mentor, for want of a better term, right?

I’m glad you like the mayor. He’s modeled on the first mayor of my town, who served for over 20 years. He did indeed work for Jacques Chirac and was politically very well connected. Now retired, he writes books of local history and runs the local archaeological society. He’s a lovely man and he taught me a lot, and he was indeed the mentor to my policeman. Three years ago, he retired and we now have a socialist mayor, a former teacher, but of very similar temperament to his predecessor. And he’s become a good friend. Oddly enough, both mayors are named Gerard, which is also the name of my fictional mayor. They both like the Bruno books.

The first one said he was relieved to find out that he was not the murderer, and the second one always asks why I insist on littering the placid landscape of our valley with corpses. The relationship between a mayor and a town policeman in France is very close; they both know everybody in town, know their parents and their children, and quite a lot of their secrets.