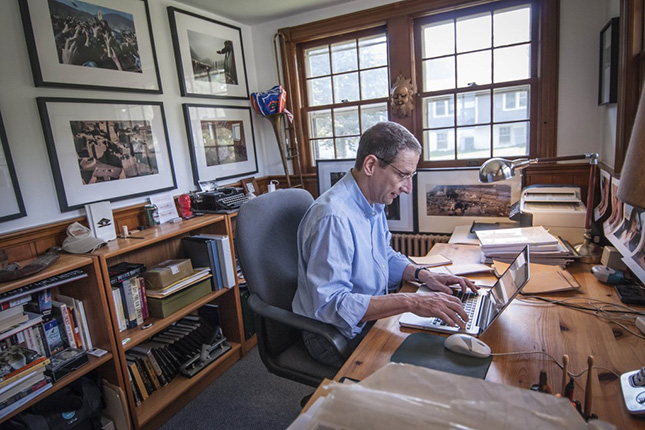 About Thank You for Your Service

Finkel, awarded a Pulitzer Prize and a MacArthur Fellowship for excellence in reporting, spares neither the reader nor the soldiers and their wives and children in recounting the soldiers’ harrowing struggle to resume the roles of neighbor, husband, and father. The book is a sequel to his 2009 The Good Soldiers which recounted the same soldiers’ lives at war.

Why did you write Thank You for Your Service?

I had written a book called The Good Soldiers, which was about a battalion of U.S. Army infantry soldiers during the 2007 “surge” in the Iraq War. After its publication, I began hearing from many of the soldiers about how they were becoming anxious, depressed, and in some cases suicidal, and I realized that The Good Soldiers was only part of the story, that the second half still needed to be told.

What prompted you to embed with the troops of the U.S. Army’s 2nd Battalion, 16th Infantry Regiment in Iraq?

They were headed into the surge, and their commander said that if I wanted to come along and document what happened to a battalion of young infantry soldiers headed into what was being regarded as the last-chance moment of the war, I’d be welcomed. By then, important policy books had been done about the war along with a few memoirs, but no one had done a journalistic account of the ground-level part, so I went in order to document that corner of it.

And why did you then follow up on those same men after they finished their deployment and returned to the U.S.?

I was with them from the beginning to the end of their deployment, including eight months on the ground with them in Baghdad. It seemed natural that if I were to write a second volume of the story, it should be about them and their families since we already knew each other to some extent.

What was the key difference you found in those men post-Iraq?

In many of the psychologically wounded, any sense of mission that was present during their time in war seemed to have faded, replaced by the lonely realization that while the truth of war is that it’s always about loving the guy next to you, the truth of the after-war is that you’re pretty much on your own.

Your ability to capture and portray the inner life of the men of the Army’s 2nd Battalion, 16th Infantry Regiment, both in Iraq and afterwards, is one of the great virtues in two books blessed with many virtues. How did you do it — follow the soldiers and talk to them constantly?

Follow the soldiers — yes. Talk to them constantly — no. The kind of journalism I do depends mostly on being present for whatever goes on rather than on interviews and recollections. When The Good Soldiers came out, one of the reviewers said of it: “You will be able to take this book down from the shelf years from now and say: This is what happened. This is what it felt like.” That’s been my hope for both of these books: The truth of what happened, and the truth of how it felt.

In my days of working with the military, soldiers distrusted civilians, journalists most of all. How did you get these men and women to open up to you?

It took a while. When I showed up in Baghdad, most of the soldiers didn’t trust me and most had no idea what a journalist does. There were lots of rumors about me — that I had an agenda; that my intent was to show soldiers to be a gang of war criminals; that I had been hired by the battalion commander to write his biography; that if they talked to me I would tell the commander everything they said. None of that was true, but such were the rumors. Over time, though, that began to change. One reason was the fact that I stayed and stayed. I didn’t just drop in and leave. That helped, and so did the fact that when bad things happened, and I was there, the soldiers saw me as a guy quietly watching and taking notes instead of being a problem for them. Inch by inch, I went from stereotype to someone more nuanced, and not by coincidence so did they.

As a victim of combat trauma myself, I found your recounting profoundly moving, and I’m grateful that you reported what I cannot speak of. Yet you reported with a journalist’s objectivity. And David Finkel — the “I” of the writer — never appears in either book at all. How did you achieve such riveting portrayals in writing so cool and detached?

I don’t know if the writing is cool and detached; I do know I tried hard not to make it sentimental and romantic. War may seem that to some readers, but soldiers who have been there know better, and both of these books are attempts to get at the hard truths. Those truths, of course, are the soldiers’ and their families’ truths, not mine, so in that sense maybe there is detachment. If so, thanks for the compliment.

I was struck by your unsentimental factual reporting in both books. But my sense is that you were deeply moved by the men you shadowed and then followed home, and yet you never express an opinion. Were you in fact touched by these men and their plight?

Of course I was moved. But the focus is on them, not me, and clouding up their story with my opinion would be disrespectful to them and a disservice to their story.

In the second book, Thank You for Your Service, you dealt with women as well as men. How was working with the women different?

Well, the entire book was different from the first one because it deals with the private and intimate psychological territory of the after-war. As for women specifically, they were largely absent from The Good Soldiers because that book was about an infantry battalion, and infantry, for the time being anyway, is an all-male deal. But the story of the after-war is as much about women as men. In fact, women may be the strongest characters of all in the new book. Their stories are amazing, and I’m glad I got to include them.

If you had to choose one man or woman you wrote about and check on him/her ten years hence to see how he/she was doing, which one would it be?

I’ve been reporting, thinking about or writing about these folks for nearly seven years now. I hope to remain in touch with every one of them.

With 16 stories in print and a Vietnam novel (Friendly Casualties) now on Amazon, Tom Glenn is a regular reviewer of books about war, veterans, and the toll combat takes on soldiers. His three-part article, “Bitter Memories: The Fall of Saigon,” appeared in the Baltimore Post-Examiner in August and September 2013, and his new novel, No-Accounts, will be published next April.