An interview with the author of an unusual dual biography of Tom and Ramsey Clark, a father and son who had a profound impact on American law and society. 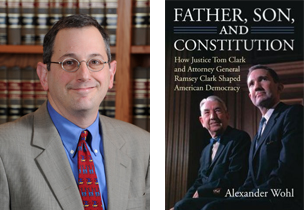 As editor of a legal blog that includes a feature on new books about the law, I have the opportunity to see many publications that address constitutional concerns, personalities who have had a profound impact on American law and democracy, legal and policy battles, and related issues. Those that offer a historical look at a certain period or issue, such as the civil rights movement, or on expanding the breadth of constitutional protections, as demonstrated by the Warren Court, are particularly interesting.

That’s why the combination of subjects in Father, Son, and Constitution: How Justice Tom Clark and Attorney General Ramsey Clark Shaped American Democracypiqued my curiosity. Tom Clark, Harry Truman’s former attorney general, was one of the more conservative members of the Warren Court, but during his 17-year tenure he evolved into a moderate-to-liberal justice, writing a number of key decisions upholding individual liberty. As both attorney general and as a justice, he supported efforts to expand civil liberties for minorities, and both joined and wrote important opinions supporting the rights of criminal defendants, an interesting position for someone with such a law and order background. He also authored a major opinion striking down organized Bible-reading in public schools. But on national security concerns he generally sided with the government, and as attorney general played a high-profile role in the implementation of a national security apparatus to spy on and intimidate communists and other “subversives.”

In contrast, his son Ramsey, who became attorney general under President Lyndon Johnson, was far more traditionally liberal in his orientation. Ramsey was an integral player in the early Robert Kennedy-led Justice Department, particularly in its efforts to end the Jim Crow era. Later, as attorney general himself, Ramsey faced the challenges of balancing government power with the protection of individual rights and progressive principles, especially in the area of anti-war activity and crime control. Indeed, Ramsey’s high-profile — but not always consistent — support of strong protections of civil liberties led to the ironic development of Richard Nixon running against Hubert Humphrey in 1968 with a centerpiece of Ramsey and LBJ as exemplars of soft-on-crime policies.

Father, Son, and Constitution provides an engaging look at the struggles of evolving political and social philosophies set against the context of some of the most turbulent historical periods in our modern history, and one that in many ways looks strikingly familiar and relevant today. My interview with author Alexander Wohl follows.

Q. You’ve written a dual biography about a Supreme Court justice and an attorney general who are father and son, something that is unique in the annals of history. What was it about these two men that inspired you to invest the time and energy required to do what is essentially enough research for two books?

A. You’re absolutely right that the life of either of these two men could be a biography on its own. My book examines their lives through their involvement with and impact on key historical events and their proximity to power through professional and personal friendships with leaders ranging from Harry Truman to Lyndon Johnson, Robert Kennedy and William O. Douglas. But because their views covered the entire ideological spectrum, I wanted to examine their efforts, both individual and often overlapping, to balance the power of government with the rights and liberties of individuals. Ultimately, it evolved from biography to a history of the men, the times they lived in, and the issues they were directly involved in as policymakers and advocates. These included the internment of Japanese Americans during World War II, the Cold War and blacklist, the civil rights revolution and Vietnam War protests, as well as other political and historical dramas of the 20th and 21st centuries.

Q. But why pick these two subjects, who seem to fit the classic paradigm: powerful white men. Why not study women, or minorities, or people who challenge the status quo?

A. That’s a fair question. The reason I initially chose Tom and Ramsey Clark had less to do with their powerful positions and more to do with their relationship as father and son. Specifically, I was impressed at learning that Tom Clark gave up his seat on the Supreme Court so that his son could be appointed attorney general by President Lyndon Johnson without fear of potential conflicts. A major theme of the book is how father and son shared an underlying appreciation for the Constitution and the Rule of Law, and how the father influenced the son and also how the son influenced the father.

That being said, the book is a study of two very powerful and influential men. But it is also an examination of how each balanced his ability to apply the power of government with the protection of individual rights. This involved issues as wide ranging as wiretapping and bugging, to questions of search and seizure and religion. And their impact, in areas like civil rights, was quite profound and made an important difference in the lives of many who were traditionally excluded from power. Ramsey Clark, in particular, has had a unique and often contentious relationship with the government he served, one he continues today through the defense of individuals he believes have been unfairly targeted or prosecuted by the U.S. government, as well as his overriding commitment to “defend the defenseless.”

Q. So what did you learn about the personal dynamic between the two men? And how did the rest of their family fit in?

A. Tom and Ramsey Clark were close from the earliest years. Ramsey had an older brother who died when the boys were children. He also had a younger sister, who several years ago wrote a biography/memoir of her father. When Ramsey was a child, due in part to his father’s busy work schedule, the two didn’t spend a lot of time together. Ironically, when Ramsey Clark was attorney general, and was working around the clock, he did not get to spend a great deal of time with his kids, and Tom Clark became, as Ramsey’s son told me, a fantastic babysitter for him and his sister.

When both men lived in Washington during their adult years, their families were very close, and they often ate dinner together. Both men’s wives played important roles supporting their husbands’ careers, and both men’s marriages lasted for more than 50 years. They would talk about everything under the sun, though not their work, which as Ramsey recalled, was unusual, given that Tom Clark was ruling on some of the major race and civil rights cases during the 1960s, at the same time that Ramsey was down in the South working to uphold federal law enforcing those civil rights.

Q. Tom Clark is often viewed as a conservative, while his son is seen as a liberal. Did that affect their relationship?

A. The ideological differences between the two were less important than the differences in their personalities. Tom Clark was a gregarious extrovert who easily mixed policy with politics, using a combination of hard work and political connections to rise steadily to the heights of the legal profession. He engaged with people and sought to promote consensus and avoid serious confrontation. In contrast, Ramsey was more introspective, with a dollop of idealism and an unwillingness to just “go along.” He sought to reject politics as part of his job, even as he understood the political implications of his actions. These differences shaped their professional careers and their personal dynamic. In addition, even though they at times were at opposite ends of the ideological spectrum on certain issues, they had a shared understanding of the inherent dignity and rights of all people, which, among other things, was part of the reason they both were such strong advocates for civil rights.

Q. I am particularly interested in how Tom Clark came to write one of the most significant Supreme Court decisions upholding the principle of separation of church and state, Abington School District v. Schempp, which struck down state laws mandating the reading of the Bible and recitation of prayer in public school?

A. Schempp was another example of Tom Clark’s evolution as a justice. For most of his career he demonstrated a “fundamental embrace” of religion and spirituality. While the term “godless communist” did not originate with him, it certainly reflected his views during the Cold War, and as attorney general he regularly linked support for religion with support for American democracy. Decisions he wrote or supported early in his Supreme Court tenure supported this approach.

In the 1960s, Clark began to demonstrate stronger support for the principle of separation of church and state even as he maintained support for the free exercise of religion as well. After the Court issued its decision in Schempp, Clark continued to discuss the case with an almost missionary zeal, and suggesting that the public misunderstood the Court’s position, believing wrongly that it had “outlawed religious observance in public schools,” when all it did was hold unconstitutional “a state written prayer circulated to state employed teachers with instructions to have their pupils recite it in unison at the beginning of each school day.” To some degree, Clark’s interpretation of the Constitution in this area was evidence of his true conservative approach. As he explained in Schempp, “The Constitution says that the government shall take no part in the establishment of religion … No means no.”

Q. Your book is published by the University Press of Kansas, an excellent academic press. But it’s clearly written with a general audience in mind. What’s behind that?

A. Your question goes to some of the key challenges facing the publishing industry today. UPK has an extraordinary reputation and catalogue, particularly for books on law and legal history. Having my book published by them gives both the book and the subject matter added credibility. So I was very pleased they wanted to publish it. And I’ve had some real success in promoting and selling the book.

But your question accurately suggests the challenge of capturing the attention of a wider swath of the public today. That’s in part because bookstores face significant economic challenges and consequently are increasingly focused on best sellers and previous successful authors. Books by new authors, or on nontraditional subjects, or that cannot be significantly discounted to compete with the Amazons of the world, face a challenge in getting attention and shelf space. To be honest, that’s why publications like the Washington Independent Review of Books have an important role to fill, by focusing not just on best sellers, but on local authors and subjects outside of the mainstream.

Jeremy Leaming is Vice President of Communications at the American Constitution Society for Law and Policy (ACS).