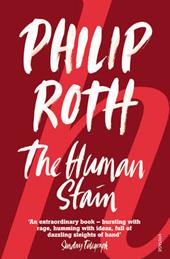 Emma Green of the Atlantic started a firestorm recently with the article “Are Jews White?” Taking for granted that Ashkenazi Jews have assimilated to whiteness, Green used the white Jewish question to wonder whether the rise of the so-called “alt-right” (read racist, misogynist white supremacists) is upending Jewish security in the U.S.

Green’s provocative title question caused quite a bit of tumult on Twitter. Predictably and understandably, Jews of color replied, with much amusement and some angst, “No.” Some white Jews responded, “No,” as well, citing anti-Semitism and/or Jewish distinctiveness. For once, this group agreed with the likes of David Duke, who tweeted in all caps “NO — JEWS ARE NOT WHITE.” Some white Jews and blacks unequivocally replied, “Yes,” citing white privilege as decisive.

While the answers to Green’s question from Jewish-American literature are all over the map, Philip Roth’s The Human Stain brilliantly depicts the continuing effects of “so arbitrary a designation as race” on those who choose or are assigned the off-whiteness of Jewishness.

Narrated by Roth’s alter ego, Nathan Zuckerman, The Human Stain is the story of Coleman Silk, a classics professor whose secret history is that of a black man who passes as a white Jew. Spanning from the 1930s through the Lewinsky scandal of the Clinton era, the novel explores the irony that Silk, wanting to “be free: not black, not even white — just on his own and free,” ends up “buried as a Jew and…killed as a Jew.”

Roth modeled Silk on real-life writer Anatole Broyard. However, since Broyard passed as white rather than as a white Jew, Silk’s attempt to escape “the tyranny of the we” through Jewishness reveals the continuing racialization of Jews through much of the 20th century even as they accrued white privilege.

Ironically, it is Silk’s proud father who sets Silk on the path of “becoming lost to his own people.” Mr. Coleman regarded “the Jews…like Indian scouts, shrewd people showing the outsider his way in, showing the social possibility, showing an intelligent colored family how it might be done.”

Some of these scouts are well-intentioned, such as his high-school boxing coach, dentist “Doc” Chizener, who tries to get him a scholarship to an historically white college by encouraging him to identify as Silky Silk, one of “Doc’s boys,” presumed Jewish. This is Silk’s first taste of what it might mean to become Jewish sans Judaism — a model minority. Other scouts claim empathy but ultimately see blacks as competitors for the few spots open to those who are not fully white.

Race as destiny becomes the American nightmare from which Silk cannot seem to awake, despite a degree from Howard University and honorable military service. So, post-war, he opts to use his light skin, his circumcised penis, and his “academic prowess” to adopt the “ersatz prestige of an aggressively thinking, self-analytic, irreverent American Jew.” In Silk’s “passing” plot, Roth gives us the paradoxical history of the whitening of Jews and the “Jewing” of intellectual/academic culture.

This paradox comes home to roost in Silk’s career at a liberal arts college in New England. As narrator Zuckerman tells it, Silky Silk’s academic career at Athena College is that of a token:

Coleman was one of a handful of Jews on the Athena faculty when he was hired and perhaps among the first of the Jews permitted to teach in a classics department anywhere in America…Through the eighties and into the nineties, Coleman was also the first and only Jew ever to serve at Athena as dean of faculty.

The waning of genteel academic anti-Semitism that permitted Silk’s presence at Athena suggests the process by which “Jews became white,” to use a phrase coined by sociologist Karen Brodkin. However, the reaction of some of the old academic white boys to Dean Silk’s instituting a reward system based on merit rather than identity — “He made the place competitive which…is what Jews do” — begs the question of whether Jewish whiteness is “ersatz” whiteness.

When Silk wonders if two perpetually absent students are “spooks,” his career at Athena morphs into a racial morality play. The students, whom he has never met, are black, and they accuse him of racism. Arguing that he used the term not as a racial epithet but rather as a synonym for “specter” or “ghost,” Silk disregards the accusation. But given that Athena College is “racially retarded,” battle lines are drawn.

As Silk tells it to Zuckerman, even a black colleague and friend hired by Silk when the only blacks on campus were custodians “has been radicalized by the racism of Jews like me. ‘I can’t be with you on this, Coleman. I’m going to have to be with them.’”

In a black-and-white academic world, Jews have become not just white, but the most visible face of white racism. Ironically, the uber-whiteness of Jews might be the last remnant of assigned off-whiteness, a term that complicates white privilege without denying it.

His wife goes down on some two-bit kike professor? There weren’t too many kikes in Vietnam, not that he can remember. They were too busy getting their degrees. Jew bastard. There’s something wrong with those Jew bastards. They don’t look right. She goes down on him? Jesus Christ. Vomit, man…This time it wasn’t with her boss, the great All-American Holllenbeck…Now it is with a gray-haired skin-and-bones old man, with a high-and-mighty Jew professor, his yellow Jew face contorted with pleasure and his trembling old hands gripping her head. Who else has a wife who sucks off an old Jew?

Although Silk passed into Jewishness thinking it would let him be “free and on his own,” he is reduced to an amalgam of anti-Semitic tropes: un-American, Orientalist, sexually perverse, elitist.

The Human Stain provocatively tackles the white Jewish question. It recaptures histories and legacies of anti-Semitism, of Jim Crow, and of intergroup relations, especially alliances and tensions between blacks and white Jews. It points to the construction and the reconstruction of race, and the sometimes progressive, sometimes retrograde role that the academy has played in that social process.

It points to the role that literature can play as we strive to understand and determine how to effectively resist this “new normal” of white supremacists in suits who are setting their sights on college campuses and millennials.

Perhaps most importantly, it honors the complexity of the white Jewish question and suggests that while it’s important to ask “Are Jews White?” it might be fatal to alliance politics and to Jewish life to answer it with finality.

In Defense of English