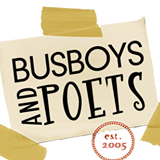 Born in the U.S. Virgin Islands, Yanique is an award-winning poet, essayist, fiction writer, and an associate professor of English at Wesleyan. Her debut novel traces Caribbean history over some sixty years as it follows the Bradshaw family, starting with a set of sisters and their half-brother. Left orphaned after a shipwreck in the early 1900s, the three use their rare beauty and uncanny talents to make their way.

Dargan, American University writing professor, editor of POST NO ILLS magazine, and author of the Cave Canem Poetry Prize-winning The Listening, has reimagined elegy as self-portrait in his fourth collection, which commemorates recent losses of family members and friends and locates meaning in “a third realm — not of bodies or souls / but the miscellany of life sketched / along the interiors of our skulls.”

When she was fifteen, Booker got a summer job at the Albert P. Wylie Funeral Home in Baltimore. She worked there for nine years, and when she suffered losses in her family, Booker found surrogate parents in the Wylies. Later, as AIDS, drugs, and street violence claimed their victims, she witnessed grief in myriad forms and learned lasting lessons about life from the perspective of death.

The author of Knocking on the Door of the White House comes to DC on Fri., Aug. 25th, at 7PM.