How to Write a Nerdy Poem

After “Assumptions” by Richard Hugo. 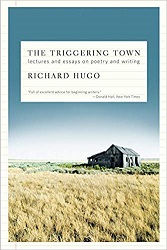 According to the poet Richard Hugo, “Words love the ridiculous areas of our minds, but silly or solid, assumptions are necessary elements in a successful base of writing operations.”

If you have ever wanted to write an unabashedly nerdy poem, here are a few things you might assume. Think of them like starting places from which a rich poem might manifest its own full life.

Or, if you will, these are the start screens, the iconic covers, the character selects, the opening theme songs, or anything else that might infuse you with a sense of expectant joy. Or, you can think of them as prompts.

Whatever keeps you thinking.

(Side Note: This column takes as its form an essay by Richard Hugo in which he writes various short assumptions about what he calls the triggering town, which, for him, is always a fictitious small town with certain parameters that invite invention and imaginative exploration. The essay is from Hugo’s The Triggering Town, published by W.W. Norton & Company.)

How motivational-interviewing tactics can help in poetry workshops.