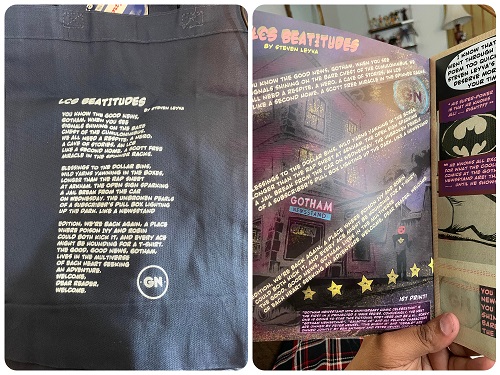 It’s been a whirlwind month of events, conventions, readings, and book launches. My family attended Baltimore ComicCon in full cosplay. The former Utah poet laureate, Paisley Rekdal, came to the University of Baltimore and gave a showstopper of a reading from her project WEST: A TRANSLATION. And Anthony Moll’s apocalyptic book of poems, You Cannot Save Here, made its debut.

Booked and busy has been the order of the day for this nerd/poet. But the pinnacle of all these events was finally seeing a poem I wrote appear in a comic-book zine produced by comic-book store Gotham Newsstand in San Antonio.

Here’s a little background: I’m part of a Facebook group for fans of a YouTube channel called “Cartoonist Kayfabe.” Along with discussion of underground, quirky, little-known comics, the group also is a place where folks could swap comics via the mail. That’s how I met Peter Hensel, the owner of Gotham Newsstand.

We were trying to work out a swap deal. Instead of trading him a comic he wanted for a comic I wanted, though, he suggested, “Hey, what I’d really like is if you’d write a poem to bless my comic-book shop.” I was stoked.

Peter told me a little about his shop, and though I often avoid writing occasional poetry, this was such a fun idea, I couldn’t resist. I wrote a poem called “LCS Beatitudes” and sent it to Peter, and that’s where things took off.

Peter read the poem and loved it. Then he suggested hiring an artist to illustrate it. Then he was like, “Well, what if we turned it into a full zine with the poem and two other stories?” And then he said, “Maybe we’ll do a tote bag with the cover of the zine on one side and the poem on the other.”

Of course, I was excited for the enthusiasm but wondered if it would all come together. Boy, did it ever. When I saw the full-sized comic and opened it to see my poem there, I was unprepared for how emotional I got. I didn’t have any illusions or specific dreams about being a comic-book writer, but here, in a small way, I was now part of the family of comic-book makers.

I was touched, to say the least, and that was before I flipped to the back of the comic and found a mix CD of chopped and screwed music made by “The Galactic US” (aka Peter). Having grown up in Houston, home of the legendary DJ Screw, this was like a nostalgia bomb for me.

All of this made me think how cool it would be if Marvel and DC Comics had poets on staff, or even poets laureate. Poets as characters show up so little in these superhero universes. Journalists, sure. All type of law enforcement, yes. A plethora of public servants, scientists, engineers, and nerds of all kinds populate the pages. But poets? Not so much.

But certainly, some of the mutants from the X-Men read and maybe write poems. Gotham can’t be complete devoid of verse, even as it struggles with crooked cops and costumed villains. Krypton (before the disaster) must’ve had poets. What if reading a book of poems was how Batman kept sane in an out-of-control world? And what if there were a person on staff at Marvel and DC who wrote the poems the fictional characters were reading?

And like with my tote bag, what if DC and Marvel made all sorts of paratexts to accompany their in-house poetry? Trading cards with poems on the back instead of power stats. An action figure with lines of verse wrapping his costume like a magic seal. What a fun project it could be to have shots of illustrated poems instead of purely narrative stories.

Maybe this is a nerd/poet’s moonshot, an acknowledgement of getting older and wanting to wring out every last wild idea, but seeing what Gotham Newsstand produced has challenged what I thought could be possible. Cool had a new definition of degree. Why not let it rock to Marvel and DC Comics?