History as the Future 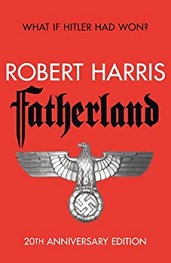 It may be serendipity or prescience, or something in between, but historical novelist Robert Harris came out with a book about the beheading of King Charles I just as King Charles III is ascending to the British throne.

The killing of Charles I paved the way for the so-called protectorate of Oliver Cromwell in Britain, followed by the Restoration and the reign of Charles II.

It had to be with some trepidation, then, that the longtime Prince of Wales took his first first name as king when he succeeded Elizabeth II at age 73 (Philip, Arthur, and George were alternatives).

Harris’ Act of Oblivion, published Tuesday, is actually about the hunt for two of the men who signed the death warrant for Charles I. They fled to the colonies in America, and a fictional Richard Nayler went to chase them down.

It stands to be the latest triumph for the former journalist turned novelist, who burst on the scene in 1992 with an alternate history about Adolf Hitler triumphing in World War II.

Fatherland was an immense bestseller and featured a Hitler ruling over most of Europe, a Berlin designed by Albert Speer, and an American President Joe Kennedy visiting the German dictator.

Since then, Harris has written numerous novels, many of them made into films. He’s even written the screenplays for a couple of them.

His debut novel remains his only alternate history, although subsequent books often clarify obscure histories or are outright revisionist. Munich, for instance, apologized for Neville Chamberlain’s appeasement of Hitler by depicting it as a ploy for delaying war and giving Britain a chance to build its defenses.

Otherwise, this English novelist ranged from Pompeii, describing the Roman aqueducts, through a trilogy about the career of Cicero and fictional treatments of former British Prime Minister Tony Blair (The Ghost) and the flash crash (The Fear Index), to the Dreyfus trial in An Officer and a Spy.

Harris turned fanciful again in The Second Sleep, which takes place in 1468 and seems a lot like an historical novel, but in fact, the action takes place 800 years after an apocalyptic catastrophe ended our civilization. Its priest protagonist, Christopher Fairfax, gradually discovers the truth of his “medieval” world.

Act of Oblivion is the first of Harris’ novels set in America, and, as reviewers have noted, it is distinguished by the author’s meticulous research.

Harris is not a moody writer like Alan Furst or an elliptical one like John Le Carré. Rather, he believes in straightforward narration, telling it like it is or was or could have been. Perhaps for this reason (and maybe it is intentional), his novels lend themselves readily to film.

Harris himself collaborated on the screenplays for “An Officer and a Spy” and “The Ghost Writer” (the latter an adaptation of The Ghost). “Munich — The Edge of War” (the title amplified to avoid confusion with that other “Munich” film) became a Netflix movie with the inimitable Jeremy Irons as Chamberlain.

“Enigma” is a 2001 film scripted by Tom Stoppard and starring Dougray Scott and Kate Winslet and is based on Harris’ novel about deciphering the Nazis’ secret code. “Archangel,” a 2005 television film starring Daniel Craig, is based on the novel with the same title about a hunt for Stalin’s lost diary.

Another Harris adaptation, “The Fear Index” limited series starring Josh Hartnett, ran in the U.K. on Sky Atlantic earlier this year and is not currently available for streaming in the U.S.

The Robert Harris corpus now runs to 15 novels. Some, like Conclave, which treats the election of a fictional pope, tread familiar ground. Others, like Fatherland and The Second Sleep, are more imaginative. Virtually all of them, however, are quite entertaining and worth reading or watching.

Authors are the only ones truly flying solo.