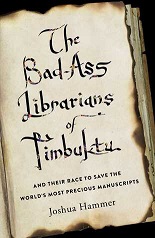 When I was growing up, Timbuktu was not a real place so much as a notion. “Going all the way to Timbuktu” was about the same as digging a hole to China. Timbuktu, in fact, is a real place, though it is indeed very far away and hard to get to even in this day and age.

In another era, however, the city in the desert was a crossroads for a flourishing Islamic culture and became the repository of hundreds of thousands of illuminated manuscripts. Saving these precious documents from destruction by the fanatics of the Islamic State as they terrorized Mali over the past decade is the subject of Joshua Hammer’s fascinating and compelling 2016 book, The Bad-Ass Librarians of Timbuktu.

Hammer, a journalist who visited the region repeatedly for Smithsonian magazine and other publications, writes with verve about the adventure first of collecting these manuscripts and housing them in a new internationally funded library, and then of hiding them and smuggling them away from the predations of the thugs posing as Islamic purists.

The belief, of course, was that these historic manuscripts represented an entire culture, and that preserving this heritage was vital to maintaining that culture. The concept is as old as the legendary library of Alexandria, Egypt, whose destruction caused untold losses to the Hellenic culture that is part of our own.

Post-apocalyptic fiction often equates destruction of books with the loss of civilization. Ray Bradbury’s Fahrenheit 451, where “firemen” burned books and hoboes saved them by memorizing them in their entirety, is a classic example.

Particularly in contrast to the merciless savagery of the IS adherents, the rescue of the Timbuktu documents showing an enlightened, moderate and genuinely peaceful Islam became more important than ever.

The dedication of those who carried out the rescue and resisted the fanatics belies any simplistic notions of contemporary Islam as well. Hammer’s vivid descriptions, with his journalist’s eye for the telling detail, bring this adventure alive.

A similar rescue operation is the subject of David E. Fishman’s The Book Smugglers. Here, the residents of the Jewish ghetto in Vilnius, Lithuania, risked their lives during the Nazi occupation in World War II to save books and manuscripts — including the diary of Zionist leader Theodor Herzl — from destruction.

Vilnius was a leading Eastern European center of Jewish culture and was often called the “Jerusalem of Lithuania.” In particular, the “paper brigade” that organized this book-smuggling operation saved rare books and artifacts house in the city’s Yiddish Scientific Institute.

Fishman, a professor Jewish theology in New York, lacks the narrative skills of Hammer, but relies on diaries and interviews of survivors to convey an immediacy and authenticity that compensates. Once again, it was a question of preserving an entire cultural heritage.

“The members of the paper brigade believed that the very essence of their community lay in its books and documents,” Fishman writes. They had faith, despite the death and destruction around them, “that there would be a Jewish people after the war, which would need to repossess its cultural treasures.”

These book smugglers were particularly careful to save literature and poetry — several of the smugglers were poets themselves — as irreplaceable depositories of that culture. That is certainly a sentiment that resonates for us book lovers following our contemporary culture via the Independent.