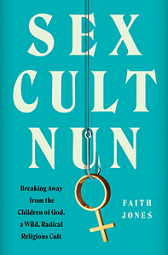 “I own me!” That’s the lesson in attorney/author Faith Jones’ TEDx Talk about women understanding property rights to our own bodies.

This declaration is significant for many reasons, but for Faith, it was her concrete realization that she’d freed herself from the obligation and guilt of her upbringing in the Children of God cult, later renamed the Family of Love, or the Family. In today’s world of social unrest and wannabe demagogues, we need to listen.

In her terrifying forthcoming memoir, Sex Cult Nun: Breaking Away from the Children of God, a Wild, Radical Religious Cult, Faith chronicles her life growing up in the Family. The book reads like a horror story mixed with true crime and a recounted nightmare, all intertwined to recreate her real-life experiences.

The head of the so-called royal family was David Brandt Berg, Faith’s paternal grandfather, who founded the Children of God in 1968. Members called him Moses David, or Mo. The Family existed until 2010 and had a rolling membership of 60,000 in 170 countries. For decades, Interpol included Mo on its wanted list for kidnapping, prostitution, and child abuse.

Moses David “found his flock,” writes Faith, in the idealistic young people who’d already turned their backs on society and embraced his message of “dropping out of an evil system by forsaking everything, including money, education, jobs and families.”

Although Faith was part of the original royal family, her father and his tribe moved to the Portuguese colony of Macau off the southern coast of China in 1978, then to the isolated village of Hac Sa, a remote beach on the farthest end of Macau.

Life in Hac Sa lacked basic comforts like electricity (except for a 20-watt bulb), running water, and air conditioning. But her family created a thriving home made up of an “End-Time Army,” whose mission was to save as many souls as they could before the Rapture.

The Family prohibited members from having contact with most of mainstream society, known as the Systemites. Moses David disseminated all news and information through newsletters called the Mo Letters and Kidz True Comics, the latter a version of the former in comic-book form.

From the moment they woke up to the moment they fell asleep, Family members immersed themselves in prayer, songs about Jesus, and hours of religious reading. Every morning, they had two hours of devotions, then Joyful Job Time, or JJT.

Although members gave up all vices — except for Mo, to whom rules didn’t apply — sex pervaded their lives. They considered sex their service to God, and “refusing sex is being hard and selfish, unyielded to God’s will. And our absolute obedience is expected.”

According to Moses David, “Sex is pure and Godly and it has been corrupted as something dirty and shameful by the Devil, who is deceiving God’s people.” In one Mo Letter, he wrote, “The Devil Hates Sex — But God Loves It. There is nothing in the world at all wrong with sex as long as it’s practiced in love, whatever it is or whoever it’s with, no matter who or what age or what relative or what manner.”

Although Faith’s father, Hosea, was her grandfather’s biological son, the “heir to the throne” was Davidito, her grandfather’s much younger son with another woman. The Story of Davidito was a child-training book Davidito’s nanny, Auntie Sara, wrote to describe Grandpa and Mama Maria’s ideas for how to raise healthy, godly kids. It also provided a detailed description of Davidito’s sexual development. Chapter 36, “Learning Fun at 20 Months, Sex!” described how Auntie Sara put toddler Davidito to sleep by playing with his penis, even kissing it.

(In 2005, Davidito made headlines by killing his nanny and then himself. In a letter to the Family, he had accused his mother and nannies of years of molestation. With this revelation, Faith was “able to consciously acknowledge that my grandfather was evil and perverted.”)

The Family encouraged sex among children and considered sex between children and adults normal until 1989, when a Family directive banned adult sex with underage kids (because of law-enforcement investigations).

One way the Family earned money and supporters was through the practice of Flirty Fishing — FFing. Family men pimped out Family women to Systemite men (the Fish) to secure donations and new followers of Jesus, and to prove their ultimate commitment to God. In a Mo Letter entitled “Hooker for Jesus,” he instructed women to “Hook Them Through Her Flesh!” Since the Family didn’t believe in birth control, many women became pregnant with children known as Jesus Babies.

Faith was raped multiple times by Family men. Her mother often called her “the Ice Queen” because she was so “unyielding” to their sexual advances. Faith and her siblings suffered severe punishments and “breaking,” “probation,” or “retraining” if they didn’t abide by Family rules.

When she briefly lived in the United States with her mother and siblings, Faith loved going to school and learning. After moving back to Asia, she taught herself high-school courses and earned a diploma. Once grown, she had an epiphany: “I refuse to be trapped in my misery. I’d rather leave behind everything I have known my whole life — friends, family, support, structure, income, everything — than have regrets.” She left the Family and went to college.

She later earned her law degree from Berkeley School of Law.

After 23 years of indoctrination, Faith had to build a “new frame of reference for behavior, morality, and reality — a new mental model of the world.” She realized so much of what she had been taught were lies, and that she had to “choose to create good from it and turn my traumas into strength.” Sex Cult Nun is evidence of that strength.

K.L. Romo writes about life on the fringe: Teetering dangerously on the edge is more interesting than standing safely in the middle. She is passionate about women’s issues and loves noisy clocks and fuzzy blankets but HATES the word normal. Find her at Romo’s Reading Room, and on Twitter at @klromo and Instagram at @k.l.romo.