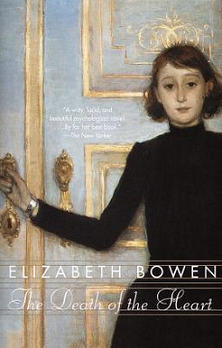 For the first time in a year, I’ve been able to leave my circumscribed pandemic bubble in Falls Church, Virginia. I’ve been up to Brunswick, Maine, and to Acadia. I’ve been to Hingham, Massachusetts. And now, I’m writing this column from my sister’s Russian Hill apartment in San Francisco.

For many of us, this year’s summer travel has taken on new meaning. Spending time with friends and family has been a special joy after more than a year apart, but it’s also been a time of reassessment — of looking at ourselves and the ways we live our lives with new eyes.

As with travel, reading also opens up new vistas. Which brings me to a book recommendation, Elizabeth Bowen’s The Death of the Heart. It’s a novel about the loss of innocence and new awakenings in the life of a teenage girl in 1930s London.

Although Bowen didn’t regard it as such, The Death of the Heart is considered by many to be her best novel. For me, reading it is so immersive that, at times, it feels like living a parallel life. The novel has substance and depth, but its genius lies in its wonderful lightness of touch.

The story concerns 16-year-old Portia, who, upon her mother’s death, goes to live with her half-brother, Thomas Quayne, and his wife, Anna, in London. We initially see Portia through Anna’s eyes: her untidy bedroom and the unflattering diary Anna finds there and reads. But in a cunning structural device, we don’t return to this diary again until the end of the book.

The novel is divided into different parts — “The World,” “The Flesh,” and “The Devil” — and we gradually experience the constructs of London society as they come apart. Seen through Portia’s candid and innocent eyes, it is no wonder Anna feels uncomfortable because, without meaning to, Portia sees through the artifice.

But Bowen also shows us Portia “enjoying what could be called a high time with Major Brutt. It is heady when you are so young that there is no talk yet of the convention of love — to be singled out; you feel you enjoy human status.”

Then along comes the charming and impossible Eddie, who is kept in Anna’s circle and given a job at Thomas’ firm, mostly because Anna is flattered by his attention. The reader knows immediately that Eddie is up to no good — even as Portia recalls the sweet things he says to her while sitting on a rug: “When you love someone all your saved up wishes start coming out.”

Eddie expands Portia’s range and her sense of herself as a woman.

The novel is poignant, wistful, and delightfully funny by turns. For instance, there’s Portia’s friendship at school with Lillian, who is navigating her own awakening. This is set against the backdrop of the classroom, where they study and where “now and then a gurgle came from a hot pipe, the tissue of small sounds that they called silence filled the room to the dome.”

On one afternoon at school, Portia writes, “We were to have a lecture on the appreciation of Mozart, but because of the fog we had a debate on consistency being the hobgoblin of small minds.”

Then Lillian finds herself in the company of an actor who puts the moves on her. He behaves “in an awful way,” subsequently disappears, and then won’t communicate with her. Poor Lillian worries that she must have hurt his feelings. The episode parallels Portia’s relationship with Eddie.

The richest chapters take place on a seaside holiday, where Portia stays with Anna’s former governess, Mrs. Heccomb, at her house, called Waikiki. Thomas and Anna have gone on their own holiday to Calais, and Portia imagines them taking the ferry until “by the time they landed in Calais, their lives would have become hypothetical.”

Now she is free to explore a new life with Mrs. Heccomb, her stepchildren, Daphne and Dickie, and all their friends. Their parties, their shopping expeditions, their liveliness, their class consciousness, all make for wonderful reading. You feel you know these people and love them.

When Eddie visits Portia at the seaside, they go to the cinema, where something happens that finally allows her to see him for what he really is: “The sort of boy who plays you up.” The reader sees Eddie for what he is long before Portia recognizes it: “He sat with his shoulders forward, in some sort of close complicity with himself.”

Even so, you feel for him. Although charming, Eddie cannot follow through with anything he does. How heartbreaking it is when he tells Portia, “In that full sense you want me, I don’t exist.” Later, he explains how he’s got to live in the world, but “you pin me down to everything.”

The Heccombs are completely unlike the London people and allow Portia to be herself because they are completely themselves — if not entirely candid. Just get a load of this excerpt from Portia’s diary, when Mrs. Heccomb wonders if she should have stepped in, regarding Eddie, in some way. Both characters are superbly conveyed even while nothing overt is revealed:

The Death of the Heart is one of those rare books that could stand up to an immediate second reading. I hope some of you will allow it to accompany you on your own holiday traveling this summer.

As we emerge from our pandemic year, spiritual stories resonate anew.