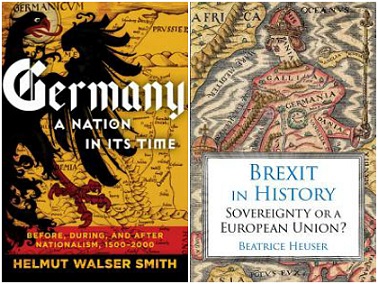 Two recent nonfiction books look at the history of Europe through different prisms, each shedding significant light on what is going on in the region now. They are written by academic historians but in a prose that is remarkably accessible.

Germany: A Nation in Its Time: Before, During, and After Nationalism, 1500-2000 by Helmut Walser Smith, a professor at Vanderbilt, looks at the development of a national identity in Germany starting not in the nationalism period of the 19th century, but in 1500, with the first mention of the Holy Roman Empire of the German Nation.

Brexit in History: Sovereignty or a European Union? by Beatrice Heuser, chair of International Relations at the University of Glasgow, starts with the Greek city-states as she traces the struggle throughout Europe’s history to trade diminished sovereignty for peace.

I lived in Paris for 11 years and in Germany for a total of 12, and wrote my own book about Europe in 1994 — The New Superregions of Europe — which optimistically (too much so, as it turns out) projected that integration would enable historic, cross-border regions to reassert themselves as national borders faded.

It hasn’t turned out that way, and the latest attempt at federating Europe is being tested not only by Britain’s decision to quit the European Union, but by the conundrum at the very heart of the EU, imposing strains that will be hard to withstand.

Which is why the two aforementioned books are so important. Until the German question is answered, the European project will be severely challenged. The choice that novelist Thomas Mann posed in 1953, whether to create a German Europe or a European Germany, has been decidedly made in favor of the former.

Smith traces the growth of a German identity using maps in an ingenious way to illustrate how first a territorial sense develops. In later centuries, poets and philosophers fill out the cultural content, paving the way eventually for Bismarck to create a Prussian-dominated empire (the second Reich, for those counting, after the Holy Roman Empire and before the Third Reich).

Smith is an unabashed Germanophile, as he makes clear at the end of the book. But he does not flinch from cataloging Nazi atrocities in excruciating detail, not only the death camps, but the massacres that preceded them before Germany could refine its mass-execution technique. It takes a strong stomach to page through the details.

Which underlines the book’s greatest flaw: Smith narrates the events but fails to analyze how the nation of Goethe, Schiller, and Kant could give rise to the Nazi horror. He does not hesitate to debunk tenacious myths, including that German civilians didn’t know what was going on, or that the regular army did not take part in atrocities. But he offers little explanation as to how this happened, or why we should trust that Germany is now tamed for eternity.

Heuser, for her part, is an unabashed advocate of the European Union as the latest, most hopeful attempt yet to resolve Europe’s tensions and maintain peace. She is somewhat more prone than Smith to academic jargon (“inter-polities” is my personal peeve). But the historical precedents are enlightening, such as when she describes Henry VIII’s break with the pope and Catholicism as the “first Brexit.”

Heuser successfully provides the context for the European Union as the latest effort at establishing a confederation-federation super-state to maintain equilibrium in a cauldron of nation-states inclined to conflict. The problem with the EU is that it tries to be all three forms of union, shifting tactically among them as circumstances dictate.

As useful as her historical account is, Heuser is hardly convincing in her conclusion that this latest attempt is the best and likely to succeed. She glides far too quickly over the bloc’s “democratic deficit” as she keeps her academic focus on tried-and-true political elites.

Therein lies the problem: The parliamentary systems in Europe give those elites wide leeway in controlling policy, but ultimately they are answerable to a national electorate. This is not the case for the sprawling Brussels bureaucracy, where untold (and unreported) corruption runs free of any political accountability.

Britain signed up for a common market, not a super-state in the making. It chafed under the endless rules imposed by the Eurocrats and, finally, as one of the oldest continuous democracies in Europe, it rebelled against Brussels’ either/or choice — my way or the highway — and elected the highway.

Heuser, like most political elites, considers this a disastrous choice historically. She is able to maintain her optimistic view of the EU also because she chooses to ignore the problem of Germany’s political and economic hegemony.

The French founders of the EU predecessors always intended for France to determine the bloc’s destiny and rein in Germany. But France had trouble keeping up with its neighbor even before reunification, and the creation of a state with 80 million people ended the contest for the 60-some million people in the U.K. or France.

On top of all this, German Chancellor Angela Merkel won four elections and kept high approval ratings with her laser-like focus on what German voters want, despite all her lip service to European integration and European welfare.

Only the coronavirus crisis has forced Merkel’s hand on Germany’s adamant refusal to be jointly responsible for debt — the breakthrough by Alexander Hamilton that enabled the United States to grow — though she can count on client states like the “frugal four” — Austria, Denmark, Sweden, and the Netherlands — to resist the initiative.

Britain has left the EU, and Italy is restive, while Eastern European countries have severe democratic deficits of their own. Even though most EU countries are still willing to make the Faustian bargain of membership, the tensions at the core of the bloc are far from resolved, as these two penetrating historical analyses make clear.