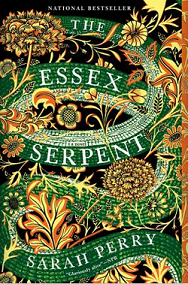 When I chose The Essex Serpent for my inaugural column, I was not expecting to find much in common with the novel. Having been told only that Sarah Perry’s story was lush and clever, I looked forward to it but also felt a certain trepidation: What will I write about it? I wondered. How will I find anything about fin de siècle Essex, England, that resonates with quarantined readers in 2020?

I needn’t have worried.

Cora Seaborne and William Ransome, the two main characters, are relatable in ways big and small. Moreover, the serpent itself, amorphous and apocryphal, serves as a loose allegory for the coronavirus — which, though it may be amorphous, is unfortunately not apocryphal.

Never actually visible at any point during the novel, the serpent yet permeates the entire narrative, affecting characters’ actions and emotions in lasting ways. It is not necessary to see the serpent to feel its influence. Similarly, we don’t need to identify actual pathogens floating in the air to know that coronavirus is a risk.

Throughout the novel, Cora and William square off on opposite sides: she insisting the serpent is a real, flesh-and-blood creature stalking the marshes; he adopting the position that it is mere myth, a flight of fancy somehow too dense, too durable, to be dismissed.

Cora fancies herself a woman of science and proof; William knows (or thinks he knows) himself to be solidly a man of God. While the people on either side of today’s debate about coronavirus — Should we wear masks? Can we travel? — might not describe themselves in such simplistic terms, it can’t be denied that there are real, tangible differences in how we’re all dealing with this tragedy, driven largely by how we choose to perceive it.

It was Cora and William’s arguments that first brought home to me the parallels between The Essex Serpent and today’s world. Not only the fact of the discussions was familiar: It was the intensity of the statements — the stubborn insistence of each party that they were right and the other should know they were right — that caught my eye.

The two protagonists expend such reckless amounts of energy trying to prove their respective points that they both end up exhausted and neither any the wiser. Sound like anything you’ve observed recently?

To be clear: I’m not suggesting that faith and science have equal weight in how we should approach a global pandemic. On this topic, despite Cora’s inability to actually locate the elusive serpent, I am squarely on her side: Where health and safety are concerned, science should be paramount.

At the same time, I couldn’t help deploring the pointlessness that permeated the pair’s verbal perambulations — none of which served to advance either’s cause one whit — and I can’t help feeling the same about the many unending arguments I’ve seen take place about the coronavirus in the past months.

It’s not that I wish we would stop fighting and all just get along. I understand that the differences we face are so great, so fundamental, that that’s not an option. It’s more that I wish, for both sides, access to a greater wellspring of empathy than now seems possible. Understanding seems unlikely without it — and only through understanding is any kind of compromise or change available in the end.

It has become common practice to look upon 2020 as a lost year, one during which the clocks stopped sometime in mid-March and have yet to start up again. I’ve been known to describe time as a flat circle (and, in the solitude of quarantine, to neglect my hairbrush for too many days on end).

In a strange way, however, I think this assessment augurs well for us. Things are challenging now, yes, but we’re adapting and acclimating; some people seem even to be thriving. (I see you, sourdough-bread makers and stamp collectors!)

There is nothing predictable about these times, which also means we are free to make — and fulfill — our own predictions. Mine? That, like Cora and William in The Essex Serpent, we’ll all find ways to live with, and perhaps even celebrate, what is yet to come.