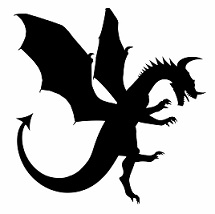 They came by their treasure in the same fashion wealth is often historically accumulated: by force and theft and an innate sense that this treasure is inherently deserved. They stayed in their caves with their riches and, being powerful and untouched, earned godlike reputations.

The dragons rarely ventured out because they knew, with understanding, they would no longer be feared. They needed shadows, even if they told themselves otherwise. They conquered a cave and liked to imagine they’d conquered the world.

Until the knights came, the world thought the same.

The crime fiction community, like seemingly all literary communities, has been in upheaval. I’ve written about this before, how this new wave of under-represented voices, particularly women and writers of color, has been met with resistance. This resistance has taken the form of tasteless humor or, in sharper rebuke, bookstores refusing to stock authors’ novels…and that only represents what’s happened in the public eye.

But those writers are still stepping forward, still marching, and they’re not alone. They have allies, and those numbers are growing.

Dragons hear that approach. And nervously curl around their treasure.

In 2018, Kellye Garrett was one of the creators of a group called Crime Writers of Color (of which I and many others are members). The organization’s intention is to bring awareness to those under-represented voices and to address the conflicts these writers face in publishing. It’s a wonderfully supportive, active, and necessary organization, and Kellye (one of crime fiction’s strongest voices, particularly in these matters) has been an inspiring leader.

Another prescient, fearless voice in this debate has been the writer Steph Cha. The author came into controversy late last year when she wrote about the Linda Fairstein debate for the L.A. Times. That led to Cha being denounced by some of crime fiction’s most prominent gatekeepers, particularly Otto Penzler.

Cha stood — and continues to stand — her ground, and time has proven her right. Fairstein’s publishing deal was canceled amid further controversy, and Penzler’s clumsy counterpunch swung wide of its target.

There has been more backlash, and Cha has taken much of it. But that hasn’t prevented her new novel, Your House Will Pay, from garnering accolades in every corner of the writing world. And it hasn’t shaken her stance. Cha’s still defiant and still writes in fierce accordance to her beliefs (this interview in Longreads is a must-read).

Cha often reminds me of a quote by a coach from the Baltimore Ravens, who was asked about the team’s brash, outspoken approach during the 2000 playoffs, especially given their underdog status.

He replied: “When you go into a lion’s den, you don’t tiptoe in. You carry a spear. You go in screaming like a banshee and say, ‘Where’s the son of a bitch?’”

That year, the Ravens won the Super Bowl.

This year, Jennifer Hillier won the Thriller Award for best hardcover novel. Sujata Massey and S.A. Cosby won Anthonys for their work (Massey also racked up a Lefty and Agatha). Angie Kim’s debut, Miracle Creek, was named one of Time Magazine’s must-read books of 2019. There are many, many more successes.

Every award, every nomination, every book deal is torchlight in that dragon’s dark cave. Shadows are dispelled.

Dragons cower from the light. They know it comes from fire.

If you ever see an animal fight to its death, you will remember two sounds it makes. The first is a roar: a warning, deep-throated scream meant to scare off whatever is threatening it. Predators, in particular, make that noise. Some, understanding its fearsome effect, make it on a frequent basis.

The second sound is similarly unforgettable: a roar mixed with desperation, often in the midst of battle. The animal has begun to realize it may die.

My involvement in Crime Writers of Color was once, to me, complicated. Half my family is from Panama, but my faulty Spanish and life spent largely in the United States have distanced me from them. I’ve never been fully accepted by white or Latinx culture. I’ve felt blinded, forbidden from peering into my past.

For many people, you need to be boxed in to be understood. When you’re not, you’re simply, as someone called me earlier this year, “a mutt.”

But CWoC has been wonderful. I’ve met other writers of mixed race who have expressed similar distance and longing. I thought I was alone. I’m not.

Years ago, I made a commitment to re-learn the language, to study Panama’s history, to mold that hazy sense of identity into something firm. To frequently take my son to the country and make sure it’s a central part of his life and identity, the way my parents tried to do with me.

And that’s been a lovely thing. I see better now.

There are still incidents. Crime fiction is reeling from recent remarks that cut deeply…and from the casual response to shrug off those cuts, the advice to laugh off the joke, something minorities and women hear over and over after an insult. To paraphrase Cha, there is dismay that anyone could be offended by something that doesn’t offend the joke-teller.

To know that, once that cave fills with light, you will be revealed.

And then the knights came. And the dragons heard the march and the unsheathing of swords, and they realized those swords would always be drawn, and those marchers would never stop. And the knights slayed the dragons and cast their torches into those caves, and the fire burnt everything inside.

And history did not preserve, or remember, the ashes.

Those dragons never knew they’d only exist in the stories we would write.

And we have other, more important, stories to tell.

E.A. Aymar is the author of The Unrepentant.

It took some time to figure out what I really needed.