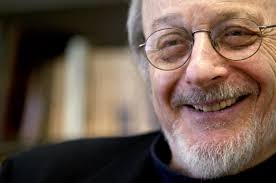 Working in journalism, I’ve gotten to interview some famous people. Usually, it’s all about them, except when it isn’t. And, sometimes, you learn a lot about a person who, rather than being self-aggrandizing, would rather talk about others.

An interview with Thurgood Marshall in his Supreme Court chambers was only incidentally about this giant in the Civil Rights movement. Instead, he spoke to me about his hero and mentor, Charles Hamilton Houston, who, as dean of Howard University Law School and NAACP litigation director, inspired young black attorneys and developed the legal strategy that toppled Jim Crow and led to the landmark Brown v. Board of Education decision.

Similarly, in 2011, I interviewed E.L. (Ed) Doctorow — the literary icon who died Tuesday at age 84 — about Jason Epstein, his longtime editor whom I was profiling for Columbia College Today, an alumni magazine. Epstein was the former editorial director of Random House, co-founder of the New York Review of Books, the first publisher of trade paperbacks, and a pioneer in print-on-demand. His stable of writers included Norman Mailer, Saul Alinsky, Jane Jacobs, and, oh, yes, Doctorow.

Doctorow’s World’s Fair had won the National Book Award for fiction in 1986. He’d also received the National Book Critics Circle award for Ragtime in 1975, for Billy Bathgate in 1989, and for The March in 2005. With such acclaim, the guy could well have been full of himself.

Doctorow, Epstein recalled, was “sweet, a pleasure to work with.” So what did the acclaimed novelist have to say for himself? I called his Upper East Side residence and left a message on his voicemail. I was shopping for groceries when he returned the call to my cellphone. Shopping done, I called him back and we spoke for quite a while, though not much about him. But what he said offered insight into how the author and his editor worked together on some of the most celebrated books of the late 20th century.

“Jason was my editor for 20 years, through several books, and he was quite a remarkable editor,” said Doctorow, who had himself once been a book editor, among other things. “He didn’t go into close line work. He would ask very mild questions about small things where he felt there was a flaw.

“Then you’d look at this little flaw and it would grow in magnitude, and you’d realize he’d put his finger on a very important issue. The idea was in asking a question on a very, very small point, he was so precise in his question that you realized that something important had been indicated to you. He was always very quiet about his critiques. He edited my first book, Loon Lake, published in 1980, and the last he worked on was City of God, in 2000.”

Doctorow, like Epstein, had residences in “the city” and Sag Harbor, the Eastern Long Island town to which many of the New York intelligentsia still retreat.

“Many, many times over the years I’ve enjoyed his hospitality at his house in Sag Harbor particularly,” he said. “He manages to become rather expert once he attaches himself to an interest fairly quickly. I’ve seen Jason walk into an antique store and engage the owner in a conversation. You have the idea shortly that they’re colleagues.”

I imagined Doctorow tagging along, taking it all in.

“I haven’t seen Jason in a while,” he continued. “When he was introducing his [print-on-demand] Espresso Book Machine at a Harvard bookstore a few months ago, I cut the ribbon for them and gave a reading shortly after. I always send him an advance copy of a book. Either I inscribe it before it’s sent or when I see him.

“I actually dedicated Billy Bathgate to him. He was passionate about that book and saw to it that the literary establishment paid really close attention to it. That’s another great quality of a great editor, someone who can get the word out and whose reputation is such that the word is very important.”

I’d asked Epstein about authors I could contact for the article, which is how I was able to reach Doctorow in the first place. My subject noted poignantly at the time, “You’d have to be in heaven to find most of them.”

Eugene L. Meyer is a former longtime Washington Post reporter and editor, an author, and a member of the board of the Washington Independent Review of Books.