Now in her 10th decade, Joyce Varney Thompson has written a new book. Her friend and ours, Grace Cavalieri, shares a glimpse of the author's life, her inspiration, and her latest work. 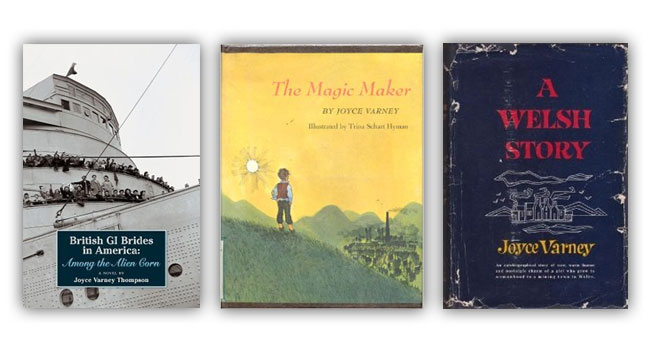 Joyce Varney’s novels were tops on the chart in the 1960s. She was a GI war bride from World War II who came to America and settled in New England with her husband’s posh Victorian family; she finally divorced and wrote her way to independence.

The Welsh Story, in 1965, catapulted Joyce Varney to celebrity, with the New York Times Book Review claiming it was a biography better than a novel, compared the writing to that of Dylan Thomas, and ended its article, “Someone ought to ask the author to write the next chapter of her life in America.” Cleveland Amory said in Cosmopolitan, “This is one of the finest personal memoirs we’ve come across in a long time.” She was at the top of the charts in the San Francisco Chronicle, the Chicago Tribune, the Washington Star, and the Library Journal. Her children’s books were an instant sensation. The Magic Maker, set in Wales, is about a little boy who believed in “tegs,” people with magical powers. And other Joyce Varney books followed.

I met Joyce in 1970, when she was setting up writing programs at Antioch College’s three East Coast campuses (Washington, DC, Columbia, MD, and Baltimore, MD) and had more students than she knew what to do with. I met her and fell in love. Joyce talked and even laughed lyrically. She was like no one I had ever met. Over the next five years that I worked with her, she taught hundreds of fiction students, while I fielded the poets and dramatists. But, in truth, there was a two-way street between us. And we worked to exhaustion, even managing hour-long tutorials for students along with classes. We had weekend writing retreats and seminars in her Columbia, MD, home; many a writer has been curried to national prominence under her tutelage.

I left Antioch and launched a new radio station in DC (WPFW-FM), but I still heard from Joyce and never lost sight of her, looking over my shoulder through the years, even after she left Antioch and moved to Maine to write full time.

Fast Forward: Joyce remarried and finally gained the love, security, and companionship she’d always longed for and dreamed about on the page. Time took its toll, they moved to Florida, and, after illnesses, she lost her husband.

The silver thread between us was never broken, and when I lost my own husband after my long marriage, Joyce was writing me letters that truly got me through. She understood the human heart more than anyone I ever knew, and she somehow managed to hold my hand over the miles. She was 90 years old.

Every time she shared an anecdote from her youth, I would leap onto it and say she MUST write the one story she’d missed fictionalizing — coming to America and all that she encountered, a character like that scared young Welsh girl. She’d been collecting notes for years and had bits and pieces tucked away and actually a semblance of a story on a rocky computer that kept crashing. She sent them to me, and I knew there was a world of readers who’d care — but that’s not the point. Writers know what they must write no matter who reads it.

I’m not, by profession, an editor, but I was able to comb through and restructure here and there and massage the chapters in place. The heft was all there. The writing power of Joyce Varney had gone nowhere at all. The book sparkled with her wit and music. In less than a year’s time, we had a book.

Forest Woods Media Productions (a.k.a. the Bunny and the Crocodile Press) had been publishing poetry books since 1976 and had some 50 books to its credit. Forest Woods chose books of excellence that the large houses wouldn’t accommodate, and, just for a few friends who were superb writers, accepted and published novels during its last 10 years of active publishing. Then, in 2012, the press closed.

But this was JOYCE VARNEY Thompson. And one more book would be published.

Joyce V. Thompson wrote a letter about her Antioch College years, and an excerpt is included below:

I left
school at fourteen in South Wales with no wish to return. The desks were nailed
to the floor along with the children from 9-to-4. I guess I was what you might
call an inspired illiterate. And quite happy with that. But my husband went to
Dartmouth, and his mom wanted his wife to get some education.

So America had other plans for me. My lapse
into literature came about when I went to a Writer’s Conference at the local
University of New Hampshire to keep a friend company. Charles Angoff, a famous
journalist, was there at the Conference and gave all of us an assignment, A
Chinese Quote:  “When Grandparents
Enter the Room Discipline flies Out The Window,” and told us to develop
it. I wrote about my Welsh grandparents who raised and spoilt me and I came
away with a prize for the short story. I remember feeling as though the
professor had said—“I now crown you Miss America.”


This encouragement led me to take special
courses at UNH, and after many E’s and D’s I finally learned how to frame a
paragraph, but never became a good speller.


This was at least 20 years away from Antioch or Harvard. But I kept writing and
taking courses and eventually published A Welsh Story, which launched my career
and on the strength of one award winning book, I became a Radcliffe Fellow, and
later a director of the writing program at Antioch College in the USA and
abroad, and by then I became the author of several books for adults and children.
And also published plays, short stories and poetry.

And now I come to the best part - meeting
Grace Cavalieri. Had I chosen Tufts instead of Antioch I might never have met
Grace. And what a loss that would be. I will never forget my first introductions.
I had been at Antioch about a month, and well over my head with overwork
when  Phil Arnoult suggested I get in
touch with Grace who was looking for a job. I will never forget her walking
into that Manor House Antioch had rented. She walked in the room, followed by
an enormous lad and her first words were: “I gave this hitchhiker a ride
to Antioch because he promised not to touch me.” She smiled with those melting
brown eyes, and her voice was such that however low she spoke you could hear
every word. My instinct was to laugh. Instead I stared into those eyes and said
simply. “You’re hired.” And that’s how it all begun. Although we
worked our hearts out, we never stopped laughing…

British GI Brides in America: Among the Alien Corn, Joyce’s latest novel, is fiction. But it bears the imprint of truth because the author was a GI bride. The story is of four women who come to America on the same ship, settle in New England, and wind their way through relationships, each finding a way to belong. It took Joyce half a century of memory, and I hope she will write another book based on her rich life, for, in spite of physical ailments, the author still has the musicality, mischief, and imagination of “a real writer.”

Verdi wrote his Requiem, one of his best, at 90 years of age. And Picasso was going great guns at 80. May we each summon the energy to write our
own inimitable/individual books like Joyce Varney Thompson does in her 10th