Dispatch from Down Under

Exploring First Nations writers during a stay in Sydney. 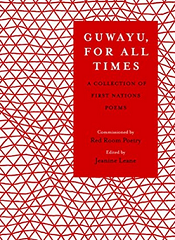 I’m in the middle of a three-month stay with my son and his family, who live in Sydney. It’s such a great excuse to read some Australian writers. Before arriving, I made a mental note to pick up Helen Garner’s new How to End a Story: Diaries 1995-1998. But on my first visit to the local bookstore, I was drawn instead to a volume of First Nations poetry: Guwayu, For All Times, edited by Jeanine Leane.

Guwayu is a Wiradjuri word meaning “still and yet for all times.” Leane is a Wiradjuri writer, poet, and academic from southwest New South Wales. “Welcome!” she writes. “You are now entering into the many Aboriginal Countries of the nation’s First Peoples. This is not Australia as you know it. This is Blak Australia — uncut and unleashed on the page.”

Western literary devices are ill-suited to First Nations poetry, she explains. She uses the metaphor of weaving baskets and nets, which is practiced by First Nations people across the continent. “Just as weaving is a series of intricately connected threads that loop, twine, coil, spiral and braid, the poets in Guwayu loop, twine, coil and spiral words together as threads in a vessel.”

Some poems include bits of oral history. Others incorporate segments of prose and are written in First Nations languages or include words from those languages.

I brought Guwayu while on a weeklong visit to the countryside, along with two other books — Fire Front: First Nations Poetry and Power Today, edited by Alison Whittaker, and Evelyn Araluen’s award-winning debut collection, Dropbear. Araluen is a Bunjalung poet, and the dropbear is a mythical creature that jumps on people from overhanging branches. It’s a joke, my son explains, about outsiders’ fear of Australian wildlife.

We drove 10 hours to Bonshaw, on the Queensland border, where members of my daughter-in-law’s family have a pecan farm. The pecan trees, stretching in rows across the valley, were ready for harvest. Hills loomed on the horizon. Wild goat and kangaroos bounded through the scrub, and at dusk I was enchanted by the sound of kookaburras in the treetops. One morning, we scrambled up rocks for 45 minutes to reach a hidden waterfall.

The place was sacred and magical. I was so impressed by the enterprise, vision, and dedication, not to mention risk, involved in the life this family has made. But I also thought about the First Nations cultures no longer thriving in Australia. This was once Kumbawai country.

In a Fire Front essay by Bruce Pascoe, who is of Yuin/Bunurong/Tasmanian heritage, I read of “the pain, the indignity, the sorrow, the humiliation, the frustration that white people were deaf and blind to the beautiful planning of a culture over 120,000 years old.”

My ancestors dance in the stars
And their tongs are in the flames
And they tell me
You have to keep the fire alive
Between the black and the white
There’s a story waiting to be spoken.

Upon my return to Sydney, I had the opportunity to speak with Leane, the Wiradjuri poet who edited Guwayu. Via Zoom, she told me that understanding First Nations writing requires laying aside Western preconceptions. These include linear time, the notion of agriculture (her new book is entitled Gawimarra, meaning gatherer), and even the distinction westerners make between self and objects beyond the self.

She takes issue with the notion that her culture is lost. “We have trauma,” she said, “but we’re not made of trauma. People will say sorry you’ve lost your culture, and I’ll say hang on. Loss? No, no! You lose a handbag, or you lose a phone or something because you’re careless perhaps…We didn’t lose our culture and put it down and forget it. Our language went to sleep, but even when it went to sleep, that’s not because we lost our culture — that’s because people wouldn’t let us practice our culture. We didn’t lose it.”

My daughter-in-law tells me there’s a practice these days before meetings and presentations of acknowledging that those assembled stand on Aboriginal land. For example, the city of Sydney is acknowledged as Gadigal Peoples of the Eora Nation. But full reconciliation has a long way to go. Leane put it like this:

“With linear time, there is an assumption that the passing of time equates with progress, whereas nothing could be further from the truth...The 70s were full of hope for us...Then, post 1996, everything regressed for Aboriginal people.”

On another bookstore visit, I did pick up that copy of Helen Garner’s How to End a Story. In it, she documents her marriage to another writer, who seems to view her success as an obstacle to his own. While he needs silence in the home in order to write, she needs life around her. Her effort to accommodate him includes seeing past his flirtation with another woman. It makes her feel like she’s going mad.

Garner is painfully astute on the death throes of this marriage. “Mild waves of ordinary affection come and go,” she writes. “But the atmosphere of the marriage is stifling and frustrating. He has turned outwards and found himself someone new to spark things up. I suppose I could do the same. If I wanted to. If I could be bothered.”

Elsewhere, she reflects, “We sleep beside each other, we eat together, we kiss goodbye when one of us goes somewhere, we kiss goodnight before we go to sleep. But we’re turned away from each other, inside.”

Turned away from each other, inside. Doesn’t this lie at the heart of inharmony, whether marital, interracial, or cross-cultural?

Later this month, I hope to attend the Sydney Writers Festival. The theme is “Change My Mind,” which has given me something to think about in our increasingly polarized world. It’s not a suggestion to change other people but a call to be open to the challenge of being changed ourselves.

Why Charlotte Brontë’s lesser-known Villette deserves its own place in the canon.