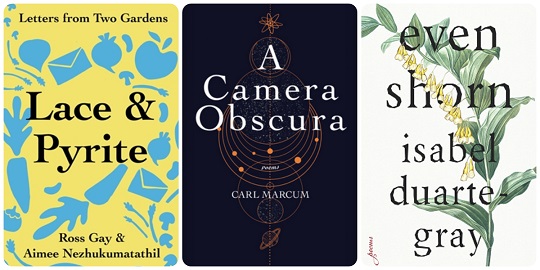 As the full days of June fall hot upon us, we enter into ripening summer gardens and widening horizons with three collections that take us from the Southwestern desert through the Midwest and into the hollers of Kentucky. Each poet here invites readers inside a private domain or into a secret language, where culture and nature collide, reshape themselves, and are born anew as different creatures.

The new edition of Lace & Pyrite: Letters From Two Gardens, which began as an exchange of correspondence between Ross Gay and Aimee Nezhukumatathil in July of 2011, has become a delightful chapbook-length collection of garden-inspired poems that move through each season. Now repackaged with a bonus interview between the poets, Lace & Pyrite’s brief sections begin and end in summer, with autumn, winter, and spring held longingly between.

All the poems are untitled, and Nezhukumatathil’s first is a hymn to the lushness surrounding her home, with lines like, “O teaselburr and grasshopper — how you catch in the hem of my skirt/like a summer cough. It’s exhausting, this desire,” propelling the book’s overall tone beautifully.

In winter, each poet yearns for the return to life. For Nezhukumatathil, the season brings ghosts and regret as she escapes “these dark weeks” to Florida. Gay writes about climate change’s creeping danger: “Nothing like peach blossoms in February to tell you/something’s off.” The call and response of the poems is very much a conversation between friends who honor the natural world; we are invited to eavesdrop.

The collection closes with Gay’s melancholy call to the bees swarming thickly in the air, one of which has fallen to the ground: “I hold her close to my face./The galaxy turning all around us.” It’s as if we’ve truly reached the promise of barrenness brought by summer’s end.

In A Camera Obscura, Carl Marcum invites us into the skies with a collection wound around the technical language of astronomy and lived experience on Earth. A poem in sections, “The Hubble Meditations,” based on deep-space images taken by the Hubble Space Telescope (as referenced in the collection’s notes), pulls together space, Earth, human history, mythology, and ancestry.

In section two, “Horsehead Nebula” — the small, dark nebula in Orion, the hunter constellation — the poet imagines the first horse ridden by humans. In section three, “Ojo de Dios,” based on the Helix Nebula, known as the “Eye of God,” Marcum invokes the culture of the Indigenous people of Mexico and the Southwestern United States:

“Huicholi fathers weave a totem for each child — a Sikuli, a flattened/helix — to imbue sight to unseen, unite the mind with the unknown.”

The thrust of the poems is the energetic connection between the darkest of matter that we cannot fully comprehend and our actions and presence on this planet. It’s an age-old contemplation turned fresh through Marcum’s own telescope.

The march of time, place, and seasons is vividly present as well in “Twenty-Three Weeks” and “Thirty-Six Weeks,” poems marking an expectant father’s arrival of his child. A slip of desert, a sturdy yet mercurial base that reveals the poet’s sense of loss over that land, weaves in and out of the collection, too, as does the appearance of snow, which represents haunting newness.

Marcum ties these themes together in poems such as “First Snow,” an elegy to a lost mother, the speaker watching the snow and remembering, “how you yearned south/ — missing the desert/the way I watch out this window/missing you.”

The poems of A Camera Obscura travel the sprawling asphalt roads of a country still slippery to those who do not fit perfectly within it yet nevertheless live beneath the vast sky map that embraces us all, regardless of our culture or home.

If there is a gift of peeking through the keyhole at a place and people most look past, it is in Isabel Duarte-Gray’s Even Shorn. Set in the nooks and crannies of rural Kentucky and the Tennessee border, the collection honors the linguistic style of Appalachia, as well as its people.

Places like Kentucky and West Virginia (where my own people hail from) are countries unto themselves, and life in the hills and hollers can be harsh and ugly — especially to an outside eye — but there exists, too, fierce pride and deep ties to the land. Duarte-Gray allows us to step carefully into, though not fully through, the doorway into this world, as befits a culture that does not trust outsiders.

Violence and hard living go hand in hand with poems like “Hillis Rednour Meets a Leviathan,” where a boy is killed “for spitting/in the wrong man’s bucket,” and in “[Back when people died it was clean],” in which a young man commits suicide by shooting himself in the heart. These poems are populated by people being dragged through towns and rivers, women working themselves to the bone while their men run wild, and an old, backwoods Christianity that permeates everything.

Duarte-Gray’s strength, however, lies most in her descriptions of the land itself, depictions of local flora and fauna interlaced with people’s voices, Appalachian folk magic, and sometimes archaic-seeming turns of phrase. In “Garden,” for instance, the speaker transforms herself via something akin to a spell:

“To be pretty for you I have dropped
two seeds of turnsole in the dark
of both eyes. I grafted
apple to the quickest
vein in either wrist.”

Similarly, “To Field Dress a Doe” reads as a set of instructions to gut a deer but transmutes into a poem about a girl and her possibly unwilling initiation into a life and place she will never be able to fully leave behind: “Step 8. If there is a child, place the heart into her hands. Tell her/this is necessary.”

While not an easy collection to get through, Even Shorn is visceral and bloody and often heartbreaking. At the same time, the full meaning of each poem is meant to be somewhat inscrutable and weird. After all, we readers are strangers only afforded a quick glimpse into this world.