A loving letter to James Agee 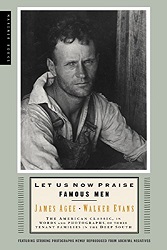 Dear Rufus (of course, I could call you James. I don't resent that you changed your name): You were born 56 years before me, and dead 11 years before I was born. If you had a “time,” it was the Depression era, but you morphed so well everywhere you went. If only you'd live a few years longer.

Ever since I met you, as little Rufus out on the sidewalk looking for friends among the cruel schoolkids of your Knoxville neighborhood, I've known more about silence and great symphonic sound. I've known more about the remoteness of the stars, their inability to alter our lives one iota with their mind-boggling beauty.

You knew the lonesome fear from your first awareness, calling out for your father, and having him hush you to sleep. These were only memories by the time you were 7 years old, and so you cultivated them.

I loved the headlong rush of your sentences, the deep pervading love of sound and language, that you sent out in your poetry, your journalism, your film criticism, your scriptwriting, and your fiction. All you turned your charging energy toward bloomed in front of your vision as you transmitted it through words.

An American vision of South and North (you were a New Yorker after all), of rich and poor, of intellect and emotion, of beauty and sadness, of art and commerce, of need and emptiness. Because your father died when you were 6.

We loved those ridiculous Chaplin films, the shorts, classics. All Americans love the Tramp, as they love Bugs Bunny, the enduring underdog, the good-humored resister, brokenhearted underneath, but striving. And then you became the archetypal Beat.

If only you hadn't been so worn out living it up between New York and Hollywood in the late 40s and early 50s, you might have hitched your star to people like Kerouac and Ginsberg and Burroughs, who also traveled extensively in the U.S. and expanded the range of literature in 20th-century American life. But then, you hated jazz.

What would you have said about rock ‘n’ roll? Bob Dylan? The Beatles? I would hope that you would have come to realize they were conveying your vision, too. But I know that the visionary doesn't always admire his disciples. And you were especially tortured about what you produced.

Well, you were tortured about everything. You were a classic borderline personality (BPD). The National Institute of Mental Health has 10 “symptoms” for BPD, and you checked off solidly on seven of them. The abandonment is so deep and the pain is so endless that the best word for it is Nietzsche's ressentiment: a continual, self-destroying doubt and spiritual perdition reflecting into the nothingness of ultimate reality.

You were afraid of the nothingness, but you fled toward it with booze and cigarettes and late-night drives and all-night carousing for all the years of your adult life. Some people might use the term “death wish.” I wish you could have lived so that I could know you better. Not that I would have loved what you did, not that I would have clung to you. But I think you would have continued to inspire me.

You weren't an empty person, but you couldn't settle on the one person you might be. You were never taught the kinds of boundaries one might learn from a father with a strong character. But the people in your life helped you survive by your wits. They put you in the fancy prep school in Massachusetts and then you went to Harvard. You were sent away from your father's land.

You managed to charm most everybody you met, through three marriages and inordinate self-destructive behavior. It was a defense mechanism, because if anybody came too close, you would give them the anxiety business and throw all benevolence and patience out the window. But you were often the life of the party, sweating through your clothes, prancing about in imitation of one high-hat or another.

From the turmoil, you produced Let Us Now Praise Famous Men. It took five years of sweat and toil to write about Depression-era sharecroppers, and when it was published, in 1941, it became instantly obsolete, as it had nothing to do with the Second World War. The book didn't sell, and was in most literary venues disregarded, so you had to find paying work.

You followed your interest and connections in motion pictures into film criticism, watching some of the worst films Hollywood ever produced, and writing scintillating prose in response. You became Chaplin’s friend and colleague!

I've always admired your connection to John Huston, whose friendship began when you highlighted his “Battle of San Pietro” (a U.S. Army film) in one of your columns. You ended up writing the screenplay for “The African Queen,’ and working with Kate and Bogey. But you were too sick to go to Africa, an occasion of some great legend in Hollywood today. It would have killed you then, I suppose.

You were wearing yourself out. You knew the end was coming. You'd spent time in the hospital, you were always “cutting down,” but never stopping. And while you ran your life down, you found wretched solace in returning to the story of your family in its earliest days, destined for destruction, but already well-formed into a loving unit.

You kept drinking and smoking late into the evenings, crafting the story of your earliest memories, some legends, some myth-making, and you re-created yourself as Rufus in Knoxville Summer, 1915.

So that, when you died in that taxi, you left behind A Death in the Family. Your heart was always a delicate, precarious instrument that you played hard. And nature doesn't forgive or forget anybody. You had to die.

And we had to carry on, but we do that with your words, your visions, and your love. Always happy to hear from you. Talk soon.