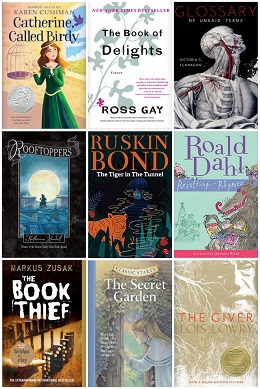 “For the children, so they may find their way through the dark —
They are all our children.”

A while ago, I was at a party in Woodley Park, where I met a former St. Alban’s schoolteacher and administrator. She introduced me to her husband, who is from Bombay like I am. He and I talked about our childhoods and discovered that we had gone to the same school — the Cathedral and John Connon School. It turned out that he had spent 14 years in the same class as my stepfather.

“Your father always had his head in a book,” he recalled vividly. They have not met each other since they graduated at age 18, over 50 years ago, both finding their way to America and settling here in the 1970s.

We ran into these new friends again recently, and the teacher asked my 12-year-old, “What are you reading?” My daughter had just finished Rooftoppers by Katherine Rundell, recommended by an Italian friend whose son had been in preschool with her.

The teacher told us that one of her favorites is The Book Thief, Markus Zusak’s debut novel. She invited my daughter for a one-on-one book club over the phone. I loved the connection to a family of old school friends and thought of this line from Joy Harjo’s poem “Break My Heart”:

“History will always find you, and wrap you
In its thousand arms.”

Over the years, summers for us have been old-fashioned — very little managed time, with me grunting, “Oh, good!” when I hear, “Mummy, I’m so bored.” Then, a few weeks ago, in the mist of my immigrant brain (with equal parts nostalgia and amnesia, I’m discovering), a vague memory emerged. I had spent my middle- and high-school years around the theater community.

I even did a Trinity School exam in speech and drama coached by my mom’s college friend Meher Jehangir. At the time, Meher directed “Agnes of God,” launching her into the spotlight as one of India’s premier theater visionaries. Her thespian husband and she founded Jehangir’s School of Speech and Drama, teaching elocution to generations of Bombay kids.

Why not ask Meher if she would recreate this activity for my kids on Zoom? I was delighted when she kindly agreed, in spite of a nine-and-a-half-hour time difference. They have started with the Roald Dahl classics and a series of silly poems.

We have been making a special effort to keep up the habit of reading, especially given that we are constantly tempted by the multitude of screens around the house. While the children are cajoled into reading their books, I’ve been keeping up with my own reading, which is infused with new life every month thanks to the Atlantic.

I recently discovered the award-winning Darcy Courteau, whose photo-essay “I’m Risking My Life to Bring You Ramen” is an important chronicle of covid-19. It reminds me of Bombay-photojournalist Santosh Verma, whose life work is the chronicling of the Everyperson and, most recently, of the workers forced by coronavirus shutdowns into making harrowing journeys back home to their villages.

On a call earlier in June, Nancy Mitchell, poet laureate of Salisbury, Maryland, told me about The Known World by DC-based writer Edward P. Jones, which won the Pulitzer Prize. While savoring my way through Jones, I took a weekday break to devour Normal People by Sally Roony (yes, if you haven’t, you too must devour it).

Some nights, I fall asleep listening to James Baldwin’s interviews, curated by my friend Donavan Brown. Two interviews in particular, conducted by those at the opposite ends of the political spectrum, bring out the power and expanse of Mr. Baldwin. With R.H. Darden, a conservative, Mr. Baldwin is ferocious, impatient, defending Black lives. With the younger Nikki Giovanni, the art of conversation is gentle and alluring. Dear reader, please find the time to listen to them both.

If you are looking for a book to gift, I recommend Ross Gay’s The Book of Delights. I had taken my girls and mother to hear Mr. Gay in a wonderful interview with Ron Charles at the Hill Center, shortly after I published my New Year’s column, “Figs on a Hill,” which references Gay’s poem “To the Fig Tree on 9th and Christian.” Walking around our schoolyard hill this week, I am happy to report that the adolescent fig trees are looking sturdy, maturing with tiny green fruit.

To keep under control the often-spiraling anxiety of living in our times, I have tethered myself to Gay: He has inspired me so much that I am exploring what it means to design my mood and make it “delight.”

In closing, I’d like to highlight two books of poetry. Glossary of Unsaid Terms by Victoria C. Flanagan is the winner of the 2020 Chad Walsh Chapbook Prize. Ms. Flanagan captures the South that my mother lives in, and I find echoes of Baldwin’s themes in her verse. In her opening poem, she writes, “And though she chooses, always, to stay, / she knows how long it takes to get way out.”

Which again brings me to Baldwin, for no other writer has so succinctly delivered the suggestion of the interconnectedness between the powerful and the powerless. Says Mr. Baldwin of racism to R.H. Darden: “They are happening to you…You are behind that veil [of segregation] too.”

To which Mr. Darden agrees. But when Mr. Darden asks Mr. Baldwin, “What we are to do about racism?” Mr. Baldwin keeps repeating, “That is up to you.” The diversity in the protestors for Black Lives Matter is a hopeful sign that that message is perhaps coming through to more of us. As James Baldwin says to Mr. Darden:

“Look, I’m talking about the spirit of this country. And what this country has to do if it’s going to survive. What it has to do is accept the fact that I’m here and I came to stay. I am not a stranger. I am not an oddity. I am flesh of your flesh and bone of your bone and if I go under, you go under…it is not metaphysical.”

The other book of poetry is Harjo’s An American Sunrise, taking me on a journey into the relocation of the Southeastern peoples. In the early 1800s, the Mvskoke people were forcibly removed from their original lands east of the Mississippi to Indian Territory, which is now part of Oklahoma.

I leave you now with Harjo’s “For Earth’s Grandsons”:

“Stand tall, no matter your height, how dark your skin…
And no matter what happens in these times of breaking —
No matter dictators, the heartless, the liars
No matter — you are born of those
Who kept ceremonial embers burning in their hands
All through the miles of relentless exile
Those who sang the path through massacre
All the way to sunrise —
You will make it through —"

I have been seeking books for my children, ages 8 and 12. Here are some we have been making our way through, a mix of old favorites and recommendations from friends and family across the world. Since many of you have been asking me to share this list, here goes: