Figs on a Hill

Poetic inspiration for the holidays 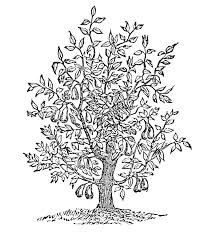 Come November, I look for a compelling stanza from a poem or a picture for my holiday card. This is a time to return, like elephants do, to ancestral bones — to feelings that evoke history, pathos, and celebration; the human condition at its most tender.

In years past, I have been drawn to the ocean, to poets like Stanley Kunitz who seem, like whales, to take water in and spray it back out, a celebratory surprise that exists side by side with unexpected vulnerability.

Recently, while corresponding over bereavement with the Indian poet Jayanta Mahapatra, I kept being drawn back to the Kunitz of sorrow, “How shall the heart be reconciled / to its feast of losses?”

Mahapatra’s lyrical poems are nostalgic, harbingers of a world that can be too fragile to bear. These poems make me ache for the Bombay of my childhood and young adulthood, where I lived in a four-generational household that had friendships with other similar homes. We shared history and funny stories, and generations at a time got to know each other over meals and vacations, births and funerals.

Though Kunitz said, “Live in the layers, / not on the litter,” the pull of nostalgia doesn’t just go away. At the same time, it makes me long for robustness and tenacity. Like the peonies in our community garden in Washington, returning every year to offer “bodacious” (my friend Teresa Savarino’s most appropriate word) beauty to the summer. Or the bees on the school hill that are painstakingly tended back to health by volunteer gardeners (like Teresa) through frost and rude attacks by delinquents.

After some searching, I thought back to a terrific reading by Ross Gay at a Split This Rock Festival. He read “To the Fig Tree on 9th and Christian,” which was published in the American Poetry Review in 2013.

“Tumbling through the / city in my / mind without once / looking up,” the narrator happens on a heaping fig tree in Philadelphia, tended by an attentive woman. The poem really needed to be read in full, but how to fit more than a 100 lines in a greeting card?

Dear Reader, do click through and read Ross Gay. In spite of its short lines, do you see the length of this poem? I shrunk the font down to eight points, squeezing it into four columns on the front of the card. While we waited for our children on the playground, my friend Joseph Dinunzio advised caution as he squinted at the ant-sized words.

He suggested I use a full page, put the greeting on the cover. So I went back home and pumped the font back up, and the arms of the poem spread out joyfully on A4. Thank you, Joe.

It was the first of December, and it was time to get this done. My printer stopped working right on cue. A child wandered into the room and regarded the sole copy of the card suspiciously. Never you mind, I thought, I will mail at least a few to my writer and gardener friends, printer willing.

Come the fourth of December, I had been busy working all day. It was a cold afternoon as I headed to school for pick up. After, as I came down the hill, a gaggle of kids in tow, I noticed some saplings, weathered and brown with cracked leaves, but with strangely fresh green protrusions. Must be magnolia or something. (It looked nothing like a magnolia.)

The next day, as we walked down the hill past the beehives, I examined the trees again. They did seem out of place. Granny would have known what they were. Mum, too. The way of families, to pass on very specific kinds of curiosity from generation to generation.

We crossed the road, and one of my children said, “Hello, Peter!” to a man I had never seen before.

He greeted her with equal enthusiasm. We shook hands. Peter walked along with us and discussed the state of the chickens and the rooftop garden leading out of the fifth grade classroom. Soon it became clear who he was: a consultant gardener at the school.

“Peter,” I said, “Tell me, do you know what the saplings are on the hill?”
“An assortment of fruit trees,” he said.
“Really, what kind?”
“Figs, mostly,” said Peter. He was a horticultural messenger for the season.

“c’mere baby,
he says and blows a kiss
to the tree which everyone knows
cannot grow this far north
being Mediterranean
and favoring the rocky, sun-baked soils
of Jordan and Sicily”

When I got home, the printer started working better than ever before. It had never been able to handle card paper. Now it seemed it was built to accept a larger charge. Go, printer.

My first set of 10 dispatched, with one to my mother, I set off to buy more cardstock. “Send out our picture!” one kid had insisted, having designed the “real card,” not her mum’s project. This kid loves every greeting that arrives with family photos, memorizing names of children she’s never met, as well as their parents from my sometimes distant past. All beloved, and obviously human. My fig card was, uh, meh.

Then my mother called excitedly. Gay’s poem was a winner. It had unearthed memories from her own childhood. Driving up the mountainous Ghats from Bombay to Pune, vendors sold figs by the side of the steep hillside roads. They would approach the car, arms outstretched, hands protectively cupping small round baskets lined with fig leaves, inside which the delicate ripe fruit had been tenderly placed.

Her grandmother Gool lived in Pune, where the figs were the sweetest my mother had ever eaten. The maid, Jai Bai, old and bent, like the woman in Ross’ poem, would bring home the fruit from the bazaar. Dressed in traditional Maharashtrian saris of plum and magenta with contrasting borders, glass bangles tinkled on her wrists as she offered the deep purple fruit, heavy and dense with sugar. My mother said that as she was speaking, she could smell Jai Bai — the comforting fragrance of freshly starched saris.

These memories brought back my own recollection of similar baskets for sale on the sidewalk in Breach Candy in Bombay, one of my haunting grounds with my mother when I was a child. It made sense now why I gravitate towards fresh figs whenever I spy them in an American supermarket.

In a single fruit is a map to my roots, reaching deep across continents. I imagine how each of us is full of many such maps. As a child, my great-grandmother Gool and I lived together for some years in my grandparents’ home along with my mum. After she died, my mother often bought figs as a gift for Christmas and birthdays. This year, Santa put figs in our stockings.

On the phone, her voice filled with delight, my mother quoted her favorite lines from Gay’s poem:

My printer stopped working again, but I love that the oldest countries of my body are tenacious indeed.