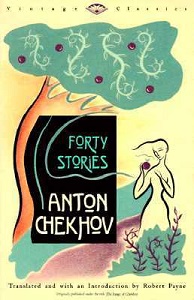 American writer George Saunders got it right when he motioned to the wellspring of ambivalence in Anton Chekhov’s fiction. “That’s one of my favorite things about Chekhov,” writes Saunders. “His ability to embody what I call ‘on the other hand’ thinking. He’ll put something out with a great deal of certainty and beauty and passion, absolutely convincing you — and then he goes, ‘On the other hand,’ and completely undermines it.”

Consider this line from “Gusev,” one of Chekhov’s midcareer stories, published in 1890: “Life doesn’t come back again, and you have to treat it gently.” When the story ends with Gusev’s dead body being flung overboard a ship into an amoral sea, readers are left to ask where this gentle treatment might be found.

In “Who is to Blame?” a joyless Latin teacher tries to browbeat a kitten into becoming a mouser. The self-starters among us might cheer when the teacher says, “Training is better than doing nothing,” but by the end, we’re no longer sure.

Two stories later (in Forty Stories, selected and translated by Robert Payne), the teacher’s get-up-and-go ideology is countered by a hypocritical royal in “The Princess,” who offers this tepid consolation to a grieving man: “What can we do? We must bear our misfortunes humbly.”

And Chekhov knew something of misfortune. He was a sickly youth who began showing the first signs of tuberculosis in his twenties. According to biographer Donald Rayfield, Chekhov’s father was a devout Christian and a strict disciplinarian who left a teenaged Chekhov in their home town of Taganrog while the rest of the family fled their debt for Moscow. Much later, when Chekhov became famous for his stories and plays, his family would hound him for money.

Unlike Charles Dickens, who was also abandoned for a time by his family, then petitioned for charity, Chekhov showed no outward signs of emotional trauma, nor was he embittered by the realities of his declining health. In the introduction of Forty Stories, Payne writes that Chekhov was a generous friend who delighted in practical jokes and loved to make people laugh, often at his own expense.

Indeed, the father of modern short stories may have taken pains in bearing his observer-like authorial status, a position which put him in line with the great Turgenev but at odds with his other predecessors, the more outward-moralizing Tolstoy and Dostoevsky.

In a letter, Chekhov once wrote: “Between ‘God exists’ and ‘there is no God’ lies a whole enormous field which a true sage has great difficulty in crossing…A good man’s indifference is as good as any religion.”

This spiritual “indifference” endows Chekhov’s writing with a cool, coruscating light that catches the various human types in the act: here, the cruel landowner forcing trespassers to beat one another (“The Little Apples”); there, the civil servant who sneezes on a general and works himself into such a state of anxiety that he dies (“Death of a Government Clerk”); now, an abandoned wife whose sexual desire for an estranged husband is so concentrated that even the landscape around her becomes erotically charged (“The Huntsman”).

And what of that enormous, un-crossable field? How does one learn to live with the chronic, Chekhovian condition coined by Saunders as “other hand thinking”?

Treatment can be found in comedic relief. Particularly, in the absurd and mercenary ways that Chekhov’s characters profane the sacred and make sacred the unexpected. In “A Blunder,” two parents of a seduced girl burst in on her and her lover with an icon, hoping to trap the man into marrying their daughter. But instead of grabbing the icon, the mother, in her haste, brings the portrait of a writer.

The pattern of iconic substitution continues in “Surgery,” when, upon entering a doctor’s office, a sexton initiates a ritual blessing in front of a bottle of carbonic acid. “In the Cemetery” opens with a man slipping in mud and grabbing a cross to prevent himself from falling — a funny, if not subtle critique of Christianity as a last resort, and an allegory likely inspired when Chekhov lost his balance on a ship and had to wrest it back by clutching a telegraph machine.

If Chekhov’s humor eases agnostic minds, it also balances the pathos of his other stories. In “Heartache,” a cab driver is so bereaved by his son’s death that he takes any form of human contact (even abuse) as warmth. “Vanka” opens with a boy writing a letter to his grandfather, begging to be rescued from a harsh apprenticeship in Moscow. And, in “Sleepyhead,” an exhausted nanny does the unthinkable out of desperation for rest.

Chekhov faces these human dilemmas with the unflinching countenance of a 19th-century Russian writer and implausibly manages to leave space for earthly wonder, an element that evokes the work of Dickens.

For even if the cab driver from “Heartache” lives a wretched existence, his little mare is a patient companion. The 9-year-old protagonist of “Vanka,” we know, will not be retrieved by his grandfather. And yet we’re left with the blush of memories from Vanka’s early childhood and the sense that his tender recollections will shepherd him through life nevertheless.

The latter section of Forty Stories is populated with a lively cast of various Annas. Of course, it was Tolstoy who gave us that most famous Anna, even if the Annas in Chekhov are stronger, wiser, and more compelling than Anna Karenina — not foremost for their gutsy refusal to loiter under trains.

Like their namesake, Chekhov’s Annas make radical choices: Anna from “Anna Round the Neck” marries for money and then neglects both her family of origin and her new husband after she learns to wield her charm in high society. Anna Sergeyevna, from “The Lady with the Pet Dog,” beguiles and tames a married womanizer. And Anna Alexeyevna, from “On Love,” brings unrequited passion to transcendent levels by recognizing not all feelings can be acted upon.

As it happens, this reader has long wanted to shout from rooftops that the oft-referenced “The Lady with the Pet Dog” garners too much attention at the expense of “On Love,” which is a superior story by every measure. “On Love” comes second only to “The Bishop,” which is the best piece in Forty Stories, and one which has been given its due by critics.

“The Bishop” was completed on February 20, 1902, and published two months later. At the point when it first appeared in print, Chekhov’s consumption-addled body would have just over two years of life left.

Like Chekhov, the fictional bishop knows his time on earth is dwindling and contemplates how well he has lived. “He felt he had failed to discover the most important thing of all, something which he had glimpsed obscurely in dreams in the past, and he was still troubled by the same hopes for the future he had felt as a child…”

In the next line, Bishop Peter takes notice of how beautifully the monks are singing during Mass. Four days from now, he’ll be dead. But today, he is alive. The monks are still singing. And despite the quickening, bleary mists of approaching death, he still has the capacity to feel moved.

“Oh, how beautifully!” he thinks.

Dorothy Reno is a senior review editor and classics columnist for the Washington Independent Review of Books. Her short fiction has been published in literary journals in Canada and the United States. She lives in Tbilisi, (former republic of) Georgia. If you would like to share your thoughts on Forty Stories (or any of Chekhov’s stories), please respond in the comments section below. Join Dorothy in reading Clotel or, The President’s Daughter by William Wells Brown, which will be the subject of her next column.

The tangling of philosophy and religion in Crime and Punishment.