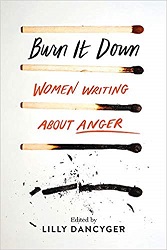 
There are many causes of anger, and many ways to express it. But, frequently, for women, we consider anger either a weakness that should be controlled or a threat to male authority. More likely than not, we expect women to behave like ladies, and ladies don’t show anger.

Burn It Down: Women Writing about Anger, an essay collection edited by Lilly Dancyger (an editor at Narratively, Catapult, and Barrelhouse), delves into the vast array of women’s anger and rage — the many causes and the many ways women have swallowed their angst, only to have it manifest into illness, sadness, shame, and guilt.

She notes that “some essays in this collection rage like wildfire, some smolder like embers, some glow like heated metal; but they all radiate the heat of women bringing their anger out of hiding and into the open air.”

Dancyger created the anthology to give women’s anger a voice, “a space to exist solely for itself, without being packaged and used for someone else’s gain.” In editing the essays, Dancyger told the authors they didn’t need to justify their emotions: “It’s okay, get angry.”

These essays consider women’s anger “for its own sake,” and Dancyger wanted the “pages to sizzle and smoke with women’s awesome rage.”

This meant different things to different writers: anger stemming from various causes and meeting other emotions. Anger turning into guilt; fear turning into anger; and anger camouflaged as sadness. Anger affecting one’s identity; the “otherness” of having a disability; how anger changes upon gender transition; and the expectations for black women in America. Anger turning to fear and shame after being abused. Anger morphed into strength and motivation.

Crying was the way Marissa Korbel showed anger. “The world taught me that rage was ugly on a girl. I curated my emotions to look the way they were supposed to: pretty.”

Evette Dionne writes that, “If you’re fat, Black, and a woman, it’s impossible to wrangle anger in a way that both dismisses the ‘angry Black woman’ trope and acknowledges the harm that has been done to you.”

The rage of "being hangry" fills Rowan Hisayo Buchanan. "A rage that I know so few women at peace with their bodies. A rage that we tell little girls the door to love is so narrow that they must starve to fit through. When I think of our collective hunger, I am filled with rage. I am hangry to my heart.”

Nina St. Pierre writes, “Girls are carrying too much. We are spilling over, top-heavy and destabilized, but praised for our maturity and adaptability if we take it, denigrated if we do not. Trained not to rage, we work in code, our bodies the medium. We eat anger and quietly metabolize it to keep you comfortable.”

“I was taught that anger was dangerous because of its proximity to hostility, violence, malice, and hate. Anger in and of itself wasn’t wrong, per se, but wrath, a close cousin, was one of the seven deadly sins,” writes Lisa Factora-Borchers.

Telling Sheryl Ring that her body is not wrong, but her soul is in the wrong body dehumanizes her. "To purposefully misgender someone is to commit an act of violence. It’s the exercise of control over their person and identity without their consent…So, the anger that comes from being misgendered isn’t just a righteous indignation. It’s also a burning hatred against the person who would deny my very existence.”

Keah Brown “hate[s] when people feel the need to remind me that I am other. They speak about my disability in such a negative way that it makes me feel less than human, and angry enough to flip a car or two. My disability, my Blackness, and my womanhood are seen before my humanity, my desires and dreams, if those are seen at all.”

And, according to Brown, “Anger is necessary when it propels us toward equality, justice, righting historical wrongs, and action. Let you anger change the world for the better…I am excited to burn it all down and build it back up to be better than it ever was before.”

Dancyger explains more about this brutally honest and enlightening collection.

You note in your foreword that you want to give women’s anger space to exist solely for itself, that it’s okay to rage.

A lot of the conversation around women’s anger that’s been happening lately seems to focus on how powerful it is/could be as a tool of political and social change. And I think that’s absolutely true — if women direct their anger in productive directions, we can accomplish incredible things. But I also wanted to make the point that our anger doesn’t have to be useful to be justified. Human beings should be allowed to feel their emotions fully, regardless of their social utility. That doesn’t mean you can or should act on everything you feel, but you’re certainly allowed to feel it. Historically, women haven’t been told that — especially not when it comes to anger.

There is sometimes a misunderstanding that women can either be angry or sad, but not both.

Sadness is a more acceptable emotion for women to have. The sad girl is sympathetic, a damsel who needs to be rescued. The sad girl also tends to hurt herself rather than inconveniencing others. Anger is big and loud, harder to ignore, more forceful. Because sadness is more acceptable to express, a lot of women convince even themselves that the emotion they’re feeling isn’t anger, it’s sadness. But if they look deeper, they’ll often discover rage.

Many women have been raised to be “good girls.” Can girls resist these expectations growing up?

I don’t think the responsibility of shifting the way young girls are taught to behave can be put on girls. It’s up to parents to catch themselves if they’re admonishing their girl children for showing that they’re upset — especially in ways that they wouldn’t admonish boy children.

What are healthy ways for young girls to show their anger without suffering the consequences for inappropriate outbursts?

Anger doesn’t have to be an outburst. Anger can be telling someone “no” when they’re pushing your boundaries; it can be telling someone that they’ve hurt you or refusing to comply with something you know is wrong. Anger isn’t always raging and screaming, but it can turn out that way when it’s not expressed in smaller amounts through conversation where it’s okay to use forceful language — and, sure, maybe even raise your voice a little sometimes. Think of all the men who are called “passionate” when they get worked up about something they care about. Now think of how women are described when they speak in that same way.

Many of the essayists in Burn It Down grew up in “angry” homes. Would girls realize they could express their anger if their mothers did?

It’s a good thing for all children to grow up with parents who know how to express emotions in a healthy way. That’s how children learn. So, if a child grows up with a mother who never lets herself get angry when her boundaries are crossed and who teaches the child the same behavior, that cycle will continue. It’s not healthy for a child to grow up in a house full of screaming rage, either. But that’s not what these pieces are talking about. I’m not encouraging anyone to be abusive or throw fits, but to acknowledge and express the range of their emotions.

What is the main message you’d like readers to take away from the book?

There’s nothing shameful about feeling angry. There are a lot of very good reasons to be angry, and women deserve just as much space to express their anger as anyone else. We’ll never achieve the equality we’re fighting for if we feel we have to be nice and sweet all the time. The world isn’t nice and sweet to us, so it’s time to take the gloves off.

K.L. Romo writes about life on the fringe: Teetering dangerously on the edge is more interesting than standing safely in the middle. She is passionate about women’s issues, loves noisy clocks and fuzzy blankets, and HATES the word normal. Find her on Twitter at @klromo.