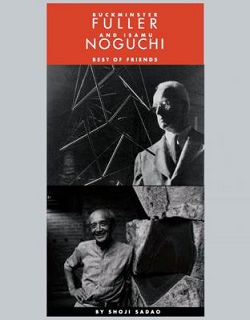 Before you begin reading, take a look at the various designs you see at this link. The images, the practical designs anyone born in the last century would recognize as “modern,” are the works (mostly) of R. Buckminster Fuller and Isamu Noguchi.

Please note that, among the first images at the above link, two are the cover of a book written by Shoji Sadao, who worked with both men while they were in the primes of their careers. The book is called Best of Friends.

Please also note the chrome bust of Fuller, which Noguchi sculpted in 1929.

Rarely do two such powerhouses come together as friends to make manifest each other’s ideas so thoroughly. They were boundless idea-guys who wouldn’t stop until they had realized their ideas in real space: organic and futuristic, natural and artificial, and, in the most inspired cases, mystical.

Which, I think, is what makes their story literary, that these visionary creators were revealing the fundamental structures of nature for science, art, and philosophy. We just don’t see these qualities all come together as Fuller and Noguchi brought them. With the geodesic dome, the Dymaxion car, the akari lighting, and the coffee table, they both applied their limitless thinking.

Fuller (who published more than two-dozen books) referred to his work as “Design Science” and created such multiple-noun notions as “dynamic maximum tension (dymaxion),” and “tensional integrity (tensegrity).” Peripatetic, his last years were spent as an influential professor at Illinois State University.

Noguchi saw himself as occupying boundary-less space between fine artistry and industrial design. He designed sets for Martha Graham’s modernist dances. He developed an early version of the baby monitor, his Radio Nurse. He designed a vast sculpture “To Be Viewed from Mars.”

Two practically minded geniuses free to imagine anything, to design a technological answer to nearly every question. But that technology was grounded in the patterns of nature, the revelations of science, the structures of material.

Here’s what Shoji Sadao said about them: “They were outsiders — in Fuller’s words, ‘random elements’ that freely traversed the intellectual landscape of their period. This shared independence and respect for the other’s critical thinking formed the basis of their intimate and deep friendship.”

When they first met (shortly after Bucky’s revelatory failed suicide attempt), in Greenwich Village, in the 1920s, “They were sidekicks and pals sharing friends and beautiful women who were fascinated by the odd combination of a Harvard-educated New England Yankee and a Japanese-American artist who had studied with Brancusi in Paris on a Guggenheim fellowship.”

“An inspirational mentor whose dedication to improving the lot of humankind through science and technology, backed by his compelling arguments and prodigious knowledge, was mesmerizing. His vision was tempered by a concept of the universe that placed man and nature in a delicate balance…”

“[His] world-encompassing peregrinations exposed him to the cultural complexity of humankind. His quest for his roots, as it were, made Isamu a world man and world citizen, questioning and searching for the deep truth…”

But let’s not kid ourselves. Bucky and Sam were dedicated to their work first and foremost. While they (especially Isamu, who really and truly “knew everybody”) cast a wide social net, their social relations could never go as deep as their mystical-technological, world-saving, structure-revealing work. They were geniuses who knew they were geniuses recognizing each other’s similar genius.

Bucky was the elder by eight years. Born in 1895 into a wealthy and socially active family and raised on the coast of Maine, where, due to Bucky’s poor eyesight and, by all accounts, restless energy, combined with his fierce Yankee independence, he became an autodidact.

He wrote in Utopia or Oblivion that, upon receiving glasses which corrected his vision, he could see the essential structures of things and understand a natural principle, Maximum strength/Minimal structure. He spent his professional life trying to design technology to be maximally responsive with minimal impact on the natural world.

Isamu Noguchi was born in Los Angeles in 1904 to a Japanese poet father and free-spirited, American, writer-editor mother. They’d met because she was translating his work into English. Sadly, even though Isamu’s mother, Leonie Gilmour, moved to Japan for 13 years, Isamu was never welcomed into his father’s life.

He was, though, a precocious designer and producer, helping his mother build one of their homes in Chigasaki, tending the garden, and working with a local carpenter. In what must have been a significantly shocking break, when Isamu was 13, his mother packed him off to a boarding school in Indiana. He was pretty much alone for the rest of his long, productive life.

But, whatever travails they had, one sees, especially when studying the designs in the way that Shoji Sadao does, the fractal structure of infinity in all of their works. They were Watson and Crick 30 years before Watson and Crick.

Their minds teemed with design responses to the questions of what exactly the unifying structures of the universe are, and how to apply those natural principles to the utilization and appreciation and preservation of our ONLY environment.

Bucky said that the Earth is like an egg. It has a natural source of food for the development of the creature inside it, and once that source is used up, the animal breaks through the shell to its new stage. Humankind is now two generations beyond Fuller’s metaphorical premonition. It seems like these best friends still have plenty to teach us in the 21st century.

Y.S. Fing recommends extended immersion in the words and works of Fuller and Noguchi.