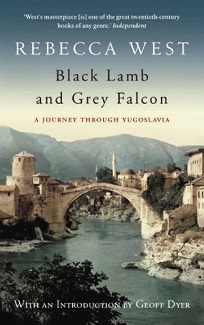 It was at the end of the book, in the epilogue — the last 77 pages of the 1,100 published in two volumes in 1941 — that Rebecca West’s Black Lamb and Grey Falcon hit me with full, unexpected emotional force.

It had been a long road for this monumental work of English literature. Once a regular on best-of and top-100 lists of the greatest books of the 20th century, by 2017, when I defended West against a persistent and bizarre linkage between her “bad history” and the violence that destroyed Yugoslavia during the 1990s, only one other person had written about the work’s 75th anniversary. In early 2021, I began to reread the book and blog about my experience to mark its 80th anniversary. I finished last month.

Black Lamb and Grey Falcon is a difficult book to categorize and therefore to read. Self-described as “a journey through Yugoslavia,” it is commonly shelved with travel literature. Strictly speaking, it is an account of West’s peregrination with her husband, Henry Andrews, through Yugoslavia in 1937. The narrative is supplemented by two other visits — in 1936 and 1938 — and by the more than 60 titles listed in her bibliography.

But the work is much more than a travel history. West, a self-taught feminist, novelist, journalist, and critic, used the book to argue about history, gender, war, art, literature, human nature, and religion in a way that would be impossible in any other genre. Her biographer Victoria Glendenning called it “the central book of [West’s] life.” The American journalist John Gunther remarked it was “not so much a book about Yugoslavia as a book about Rebecca West.”

Starting not long after the Jan. 6th insurrection at the U.S. Capitol, I’d intended to mine the book for the warning signs of the creeping nationalist and fascist sentiments obvious to West in central and southern Europe in the 1930s. They were, of course, clear — especially with the hindsight of 1941, as the Nazi flood crested over Europe, and the United Kingdom stood alone.

West personifies this continent-wide shift right in the wife of her guide, whom she names Gerda, a stout German hausfrau who holds Slavs and her own Jewish husband in deep contempt. In her very public racism and antisemitism, Gerda could be seen as the original “Karen.”

Andrews’ opinion of Gerda helped me understand why thousands of Americans sacked their own nation’s capitol. To any rational observer, the conspiracies and lies that motivated the insurrectionists were absurd. Yet the attack exposed not so much the gullibility of the American mind as its pervasive and deep-dyed miscomprehension of political process. Like them, “Gerda has no sense of process,” Andrews tells West. “She wants the result without doing any of the work that goes to make it.”

This is a very good way to understand the insurrectionists: They wanted political victory but had no sense (bound by reality) of how to achieve it. Instead, the attackers exhibited a “king of the hill” conception of our electoral system: a paranoid, naïve delusion that a public ceremony was, in fact, a secret cabal. It’s a childlike understanding of grown-up politics.

With that insight (200 pages past the book’s midpoint), I read through to the end. Along the way, West notes with creeping alarm the signs of the war to come. In Montenegro, she encounters a Berliner trying — unconvincingly — to pass as Danish. Her guide identifies the chief German intelligence officer for all of Yugoslavia brunching with family in a restaurant. A blond monk brags that he will soon host Adolf Hitler and Hermann Göring.

The principal narrative ends when West’s guide learns about a massacre of Albanian protesters at the hand of the fascist Italian puppet government in Tirana. He warns ominously, “It is all nasty, so nasty, and it will not stop until the end.”

The last chapter finished, I turned to the epilogue.

Black Lamb and Grey Falcon is partly a sprawling defense of small nations and their people against imperial predations. West writes about centuries of foreign adventurism in the Balkans and their ruinous, deracinating effect. In the epilogue, she explicitly ties this argument to her current (at the time) situation, after the London Blitz and still under the threat of German invasion.

West was deeply moved by Yugoslavia’s resistance to Nazi occupation. Its partisan movement would prove to be the most effective paramilitary organization during the war in Europe. She is especially stirred by Serbs’ sharp response to Germany’s occupation of Yugoslavia in April 1941. “Often, when I have thought of invasion, or when a bomb has dropped nearby,” she writes, “I have prayed, ‘Let me behave like a Serb.’”

Reading that, I felt not just the recognition of historical antecedent but a burst of powerful emotion. Yesterday’s Yugoslavia is Ukraine today. Ukrainian resistance to Vladimir Putin’s folly has electrified and galvanized the free world. Defiance to subjugation is again a rallying cry for free peoples. At the precise moment I feared the rising flood of autocracy and cynicism would crash over Ukraine, the dam held. For the first time in a decade, I felt confident the wounded, post-war liberal order still had some fight left in it.

I found myself almost overcome as I read the final paragraph of Black Lamb and Grey Falcon. Here, West closes the circle, concluding her book with the same event she started with, the 1934 assassination of Yugoslavia’s King Alexander I in Marseille. Over the span of a thousand-plus pages, what first appeared to be the sideshow death of a peripheral royal becomes an ominous portent of evil to come. But still, writes West, there is hope:

“For the news that Hitler had been defied by Yugoslavia travelled like sunshine over the countries which he had devoured and humiliated, promising spring. In Marseille some people picked flowers from their gardens and others ordered wreaths from the florists, and they carried them down to the Cannebière. The police guessed what they meant to do, and would not let them go along the street. But there were trams passing by, and they boarded them. The tram-drivers drove very slowly, and the people were able to throw down their flowers on the spot where King Alexander of Yugoslavia had been killed.”

The symbol of the Ukrainian resistance is the sunflower. Who will forget the woman who urged sunflower seeds on Russian troops so their bodies may grow flowers after they die there? That I should understand her defiance more deeply through a book twice as old as she is testament both to Rebecca West and to the nerve of our anonymous Ukrainian heroine who mocked oblivion to its face.