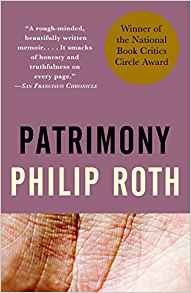 One of life’s toughest journeys is accompanying a loved one into old age or disability, for it is a trip that will inevitably lead to the grave, and that final farewell can bring crushing grief and an awful aloneness.

In Patrimony: A True Story, published in 1991, Philip Roth made that journey with his 86-year-old father, who had been struck by a virulent brain tumor, leaving him “utterly isolated within a body that had become a terrifying escape-proof enclosure, the holding pen in a slaughterhouse.”

With unsparing prose, Roth chronicles the last two years of his father’s life, which became a horrifying excursion into modern medicine — different doctors with various diagnoses and misdiagnoses, some which required crippling surgeries by men the author “wouldn’t trust to carve my Thanksgiving turkey.”

The questionable results and protracted recovery left father and son bewildered and frustrated as they tried to make wracking decisions about prolonging life and postponing death. In the end, they decide against all surgeries and try to deal with the effects of the growing tumor, which leave Herman Roth disfigured with facial paralysis, deaf in one ear, and blind in one eye.

Through the son, we come to know the father as “obsessively stubborn and stubbornly obsessive,” a “pitiless realist” who tossed out his wife’s clothes hours after she died. Philip Roth’s mother had been “a good-natured, even tempered, untroublesome partner whose faults and failings [his father] could correct unceasingly.”

We see “the poignant abyss” between the pair — the father, two generations removed from Galicia in Northern Spain with only an eighth-grade education, whose hard work as an insurance salesman for Metropolitan Life in Newark made it possible for the son to be educated, the elixir that would elevate him realms beyond his parents — socially, intellectually, and professionally.

“I had prematurely entered high school at the age of twelve, just about the age when [my father] had left for good to support his immigrant parents,” Roth writes.

He earned his M.A. in literature from the University of Chicago, became a Distinguished Professor at Princeton, wrote 32 books of fiction and nonfiction, and won almost every literary prize imaginable.

For many years, Roth distanced himself from his hectoring father, who, he writes, “had no idea just how unproductive, how maddening, even, at times, cruel his admonishing could be.” Yet he pays him loving tribute for being a survivor: for surviving financial setbacks, for surviving an immigrant’s humiliations, for surviving a Jew’s discrimination in the claws of anti-Semitism.

Father and son finally bond over their shared passion for baseball, a bit reminiscent of “Field of Dreams.” One of the most affecting scenes in the book is Roth’s recollection of game five of the playoffs between the Mets and the Astros on October 14, 1986, when he was in London, six hours away from the game his father is watching in New Jersey.

Their transcontinental conversation sounds like a play-by-play between two exuberant boys until the father remembers his son is calling from England. “Hey…This is going to cost you a fortune.” Ecstatic that his father’s tumor has given him enough remission to enjoy the game, Roth urges him to continue. “Go ahead, Herm. I’m a rich man. Pitch by pitch. Who’s up?”

Roth found his father in advanced age to have become “annoyingly tight” about spending money on himself for a cleaning lady or for a subscription to his beloved New York Times. One wonders why the “rich” son did not step forward to provide those small luxuries, indicating perhaps that the leaf does not fall far from the tree.

Yet, as a good son, Roth stepped up to usher his father through his last 24 months of life, taking care of him as one might a newborn child. He drew his Epsom salt baths, tested the water, helped him in and out of the tub, and observed — only as the author of Portnoy’s Complaint would — that his father’s member “looked pretty serviceable. Stouter around, I noticed, than my own.”

Roth’s writing here is extraordinary but hardly elevating. As the New York Times proclaimed, Patrimony is “American storytelling at its least lyrical.” One of the “least lyrical” parts of this memoir, which won the National Book Critics Circle Award, is the breath-stopping scene of the father’s incontinence in his son’s home, where the old man dissolves into tears and shamefully admits, “I beshat myself.”

The son goes down on his hands and knees, stifling disgust and nausea, to clean a bathroom floor full of his father’s excrement, which, he relates with mordant humor, is true patrimony. “And not because cleaning it up was symbolic of something else, but because it wasn’t, because it was nothing less or more than lived reality.”

Roth saw his patrimony not in inherited wealth or the accumulated treasures of a lifetime from his father, but in cleaning up his father’s befoulment.

On his last day of life, Herman Roth was rushed to the hospital, unable to breathe. The attending physician was prepared to take “extraordinary measures” to keep him alive when Philip Roth arrived and had to decide whether to follow his father’s living will, which stipulated no life support. He writes that he had to sit with his father a very long time before he could say, “Dad, I’m going to have to let you go.”

Only at the end of the book do we learn that “in keeping with the unseemliness of my profession,” Philip Roth had been writing this memoir all the time his father was ill and dying.

Many will be grateful that he did.