Beyond The Book in Contemporary/Literary

Beyond The Book: Electrico W 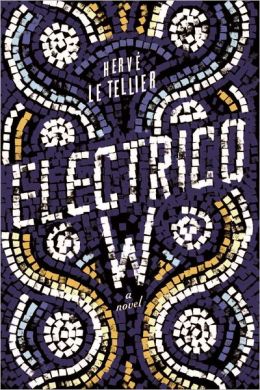 Early in the French writer Hervé Le Tellier’s newly translated novel Eléctrico W, we meet a beautiful girl named Duck. Duck seems uncommonly interested in banal aspects of a male character’s life, and within a page of her appearance she is instructing him to close his eyes, after which she surprises him (but not the reader) with a kiss. “‘You looked,’ she whispers in his ear.”

By this point, the birdwatcher in us feels confident in the identification of this Duck: its subspecies is “Manic Pixie Dream Girl,” a stock character that the film critic Nathan Rabin defines as a female who exists solely “to teach broodingly soulful young men to embrace life and its infinite mysteries and adventures.” For fans of the coming-of-age art of the aughts, use of a Manic Pixie Dream Girl might provoke a smug reaction: having caught the author using a type that we know a fashionable critical term for empowers us to pass judgment on the wider work, and pigeonhole it in a loosely defined genre that we don’t know a fashionable critical term for. Yet in our complacency, we risk missing the extent of what we have uncovered: Eléctrico W is not merely a novel about a Manic Pixie Dream Girl, it is a novel about a Manic Pixie Dream Country.

The place is called “Portugal” and, much like the “New Jersey” of Zach Braff’s Garden State, it is somewhere protagonists go to find themselves after the death of a parent. Portugal is a place infused with gleeful twee, so much so that even Pinheiro, the serial killer filling the headlines of local newspapers, is surprisingly unthreatening. He is a dapper man, who displays no violence outside intermittent moments of murder, and accessorizes oddly: he sports an intricate chainmail vest under his glen plaid suit. Pinheiro is not a menacingly well-heeled psychopath in the way of a Hannibal Lector, but rather a killer whose docile demeanor seems to speak louder than his actions. He is an emblem of Portugal as the novel’s visiting protagonist treats it: a place of redemption, where the earnestness of lost souls is recognized no matter what more glaring qualities they might have.

In Portugal, moreover, only personal qualities ever glare: like Eléctrico W itself, Pinheiro’s story is devoid of both suspense and plot arc. He and his fellow characters seem to drift through pages in the way of aquarium fish, generating tranquil fascination, but never an elevated heart rate. The novel, which is written as a series of long journal entries covering nine successive days, slows down time as an aesthetic gesture, to facilitate the leisurely contemplation of life at large.

The journal entry format, if slightly unconventional by most standards, actually represents rather a timid technique for a writer like Le Tellier. He is an active member of OuLiPo, the French literary collective that prides itself on experimental writing, and particularly on the use of quirky formal limitations as a catalyst of creativity. Most famously, OuLiPo writers have undertaken to write entire novels without the letter E, and Le Tellier himself rose to prominence with A Thousand Pearls (for a Thousand Pennies), a work consisting of 1,000 sentences all beginning with the words “I think that.” Eléctrico W is a departure from the more extreme stylistic innovations of its Oulipean author, and it is hard not to see its sometimes cliché approach to self-discovery as a consequence of that change.

Yet if all this suggests that Eléctrico W’s introspection might be self-involved to the point of distastefulness, consider: five paragraphs into this review, the protagonist’s name has not been mentioned. This choice mirrors that of Le Tellier’s novel: Vincent Balmer, as we eventually learn he is called, is a strangely vicarious central figure, a journalist whose apparent quest to find himself presents as a fascination with uncovering and telling the stories of others. Such impersonal personal discovery is no small innovation: in what other novel does a Manic Pixie Dream Girl help the narrator find himself by falling in love with someone else? The quest to learn about oneself through what is most foreign makes for something of a paradox: Vincent’s fascination with Portugal is both a way of paying tribute to the country and a patronizingly exotic distortion of it. The reader, to the extent she goes along for the ride, may become complicit; it is important, in reading this book, to not be deluded into thinking one is learning something about Portugal.

Le Tellier, for his part, isn’t deluded about the story he’s telling; in interviews, he pronounces his title “Eléctrico Double Vé,” mixing the Portuguese word for a subway line and the French W, acknowledging the distortive powers of his Parisian perspective. Like their creator, his characters are conscious of their convenient misapprehension of strange cultures: in one scene they eat at a Chinese restaurant where “the exotic décor managed to offset the lack of chopsticks.” For Vincent, inauthentic experience is a goal rather than a source of shame. The reason is simple: inauthentic Chinese food is delicious, and to label it un-Chinese food would ruin the atmosphere.

Eléctrico W is a novel that takes Portugal not as a blank canvas but as a full canvas it’s willing to paint over; yet Le Tellier’s touch is so light, and his aesthetic so dreamy, that he manages to hover above the real place he’s magically misrepresenting without defacing it. For readers who care more about the magic of foreign lands than their reality, it’s worth taking a trip to his hipster Epcot.

Benjamin Wood is the author of The Bellwether Revivals: A Novel