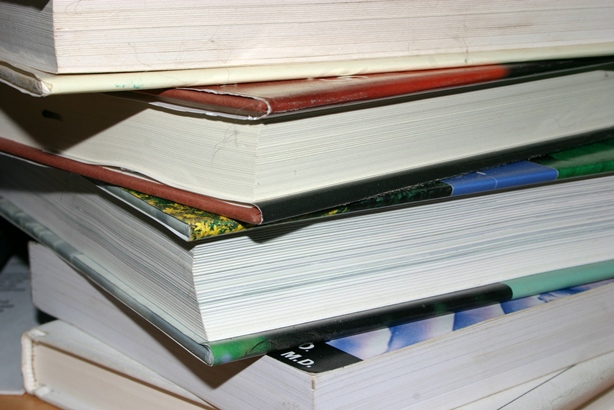 I’m always reading more than one book at a time. And I keep my e-reader by the bed so if (when!) I wake up in the middle of the night, I can read without turning on a light.

The gazillion periodicals covering the family coffee table, including the Sun, Columbia Journalism Review, Bitch, and Utne Reader. I spend a lot of time online, too, reading both literary stuff and, lately, trying to educate myself on the history of the world’s conflicts. And playing Scrabble.

Jennifer Niesslein is the founder and editor of Full Grown People, a web magazine of personal essays about the other awkward age: adulthood.

I am a book reviewer by trade, so it’s not unusual for me to have lots of books to read that I didn’t choose. But at the moment, the situation is out of control. As one of three judges for the Kirkus Prize for fiction, no fewer than 273 books have shown up at my door in the past few weeks. From these, Kate Christensen, Stephanie Valdez, and I will select a short list of six, then a winner to be announced in October. This person will get $50,000, which is five times the size of the Pulitzer Prize or the National Book Award. Similar awards will be made in Nonfiction and Young Adult categories.

I can’t discuss the deliberations of the committee or give away the titles we like and don’t like so far. But before the competition ever got underway, I had given rave reviews in Newsday to Lily King’s Euphoria and Elizabeth Gilbert’s The Signature of All Things — both about women scientists. Euphoria is based on an incident from the life of Margaret Mead — when her third husband, Gregory Bateson, stole her from her second husband, Reo Fortune, during the period when they were all doing field work with tribes on the Amazon. King’s book fictionalizes and renames the characters and gives the story a very different ending than it had in real life.

The Signature of All Things is a sprawling novel set in 19th-century Philadelphia that follows the life of an amateur botanist named Alma Whittaker, who discovers evolution on her own about the same time Darwin does. Whether you liked or didn’t like Eat, Pray, Love doesn’t matter — the two books are so very different. (If you never read Stern Men, Gilbert’s great comic novel about lobstermen in Maine, put that one on your list, too.)

Because of all the reading for the prize, I don’t know when I’ll get to these books, but they’re up next when my time is my own again:

So, gotta run. Reading a first novel called Shotgun Lovesongs by Nickolas Butler, which came in the Kirkus tsunami. Seems good so far.

Marion Winik is the author of eight books of creative nonfiction, including the New York Times Notable Book First Comes Love, The Glen Rock Book of the Dead, and Highs in the Low Fifties. Winik writes a column at BaltimoreFishbowl.com, reviews books for Newsday and Kirkus, and teaches at the University of Baltimore. She was a commentator on NPR’s All Things Considered for 15 years.

7 Most Favorable Reviews in June 2021