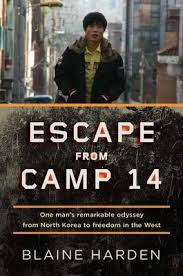 I've always been told that my birthday is July 27, and it is on that day I celebrate. But as an adoptee of American and Korean parentage, I sometimes wonder if I really was born on the very same date of the signing of the armistice agreement between North and South Korea. Perhaps it's a neat coincidence that I was born on that anniversary, or perhaps there are scores of American-Korean adoptees who eat birthday cake on that day.

While writing a novel on adoption, I found my birth country of Korea to be the perfect metaphor for the split identity of an adoptee: one half a well-adjusted, modern, westernized success story, the other a dark and unknown territory ruled by fantasies both light and dark.

Delving into the subject of North Korea, I availed myself of the recent wealth of books on the DPRK, among them Barbara Demick's penetrating and deeply informative Nothing to Envy: Ordinary Lives in North Korea; B.R. Myers' analysis of North Korea's masterful propaganda and branding of Korean purity, The Cleanest Race: How North Koreans See Themselves — And Why It Matters; and Blaine Harden's Escape from Camp 14: One Man's Remarkable Odyssey from North Korea to Freedom in the West, the shocking, painful-to-read memoir of Shin Dong-hyuk, who was born in the worst of the worst of North Korea's labor camps.

Mr. Shin recently confessed that his story, as told in Escape from Camp 14, is not factually accurate. Instead of spending his whole life in Camp 14, which is basically a concentration camp, he was transferred to another camp, where the inmates were not as brutalized.

He now claims to have escaped twice from that camp, which was the reason he was tortured as graphically described in the memoir, not for failure to report his mother and brother were planning to escape as was originally reported. That he bears scars of torture is confirmed by Blaine Harden, who explained in the book that there was no way to fact-check Shin's story, as North Korea is a black hole of information from which almost no reliable facts escape.

Humans are hard-wired to stretch the truth to make a better, more teachable story. Some truths and details are inconvenient. A story can find a wider audience or make a greater impact if the facts are bent. Jesus was probably not born on December 25; presidential scholars say it is unlikely that George Washington chopped down a cherry tree; Christopher Columbus definitely did not discover the New World.

But the church found it convenient to piggy-back off existing pagan holidays; parents taught their children morality through a simple, patriotic fable; and Europeans glibly justified the exploitation and slaughter of indigenous people. Facts are the playthings of the victors of history.

Even the most meticulously researched biographies and histories can never capture the truth. New facts pop up; silences are broken; segments of humanity whose viewpoint was not deemed relevant finally get a voice; technological advances contradict previous scientific analyses. Stories are forever unraveling, changing, mutating. As anyone who has read The Sound and the Fury can attest, the exact same event can be experienced and remembered in radically different ways by those who were there.

I hold this truth to be self-evident: There is no such thing as the one true story. He who shouts the loudest wins. Truthiness prevails.

Sometimes writers fiddle with the facts for acclaim, as Janet Cooke did with "Jimmy's World." (I can still see the article, taking up most of the front page of the Washington Post's Style section, illustrated with a drawing of a waifish little boy wearing an Izod shirt. Does my memory bear some resemblance to reality, or has the faulty wiring of my memory failed me once again?)

Sometimes it is for fame, as was the case with James Frey, who initially tried to sell A Million Little Pieces as a novel, but could only get it published when he removed the "based on" from the "true story."

Sometimes it is done to get people's attention for a worthy cause, as Mike Daisey did in his exposé of abuses at an Apple factory in China for public radio’s “This American Life,” excusing his "significant fabrications" as taking "shortcuts in my passion to be heard."

Sometimes a writer does it to better tell the story, as Edmund Morris did, without subterfuge, in Dutch: A Memoir of Ronald Reagan — serving up a fact-fiction blend that blurs the lines between scholarship and storytelling.

Shin Dong-hyuk was possibly motivated by all those factors, but unlike the aforementioned, he is a survivor of the most repressive government on Earth, raised in labor camps where the only education was self-taught survival skills, regarding his own mother as a rival for food. However he stretched the details, he afforded a rare glimpse inside North Korea's gulags, and has since been an outspoken activist against the human rights abuses perpetrated by the Kim regime.

Maybe because my own origin story is murky, I approach historical accounts — including newspaper articles and documentaries — with skepticism. Because even the definition of truth is so elusive, I regard all nonfiction as "based on a true story" rather than just the cold, hard facts.