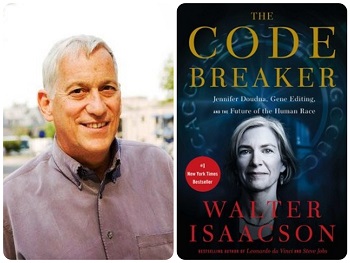 Journalist/professor Walter Isaacson has written a string of bestsellers, including the biographies Benjamin Franklin: An American Life, Einstein: His Life and Universe, and Leonardo Da Vinci. Now, with The Code Breaker: Jennifer Doudna, Gene Editing, and the Future of the Human Race, Isaacson tells a different kind of story, that of the scientists behind CRISPR, a potentially game-changing technology in the field of genetics. O Magazine calls the new work “an enthralling detective story, crackling with ambition and feuds, laboratories and conferences, Nobel laureates and self-taught mavericks.”

Isaacson recently discussed The Code Breaker with author/attorney Talmage Boston. Listen to the podcast here. (And read Boston’s thoughts on the book here.)

Authors on Audio: A Conversation with Ariel Sabar

Authors on Audio: A Conversation with David O. Stewart