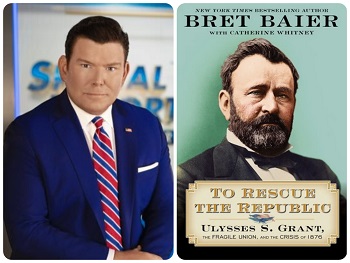 Best known as anchor of “Special Report with Bret Baier” on the Fox News Channel, Bret Baier is also the author of several books, including, most recently, To Rescue the Republic: Ulysses S. Grant, the Fragile Union, and the Crisis of 1876. Publishers Weekly calls the book, co-written by Catherine Whitney, “an accessible and nuanced introduction to an oft-misunderstood figure [from] American history.”

Baier discussed To Rescue the Republic with author/attorney Talmage Boston in late October. Listen to the podcast here.

Authors on Audio: A Conversation with Greg Iles