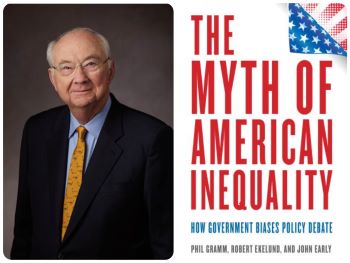 Phil Gramm is best known for his long career representing Texas as a Republican in both the U.S. House of Representatives and the Senate, but he’s also a respected economist. His new book, co-authored with Robert Ekelund and John Early, is The Myth of American Inequality: How Government Biases Policy Debate. “With admirable clarity, their book demonstrates that the federal government egregiously overstates the degree of inequality and poverty in the world’s wealthiest nation,” says the Boston Globe. “[It] refutes the demagoguery, and convincingly shows that the gap between top and bottom is not wider than ever, but narrower.”

Authors on Audio: A Conversation with Bud Selig